At last, a restaurant that really speaks to me!

Readers who’ve been following this miniseries may recall that time in the earlier chapters when we got together in Chicago with friends from our long-lived online fan community, which will be celebrating its twentieth birthday in 2019, Lord willing. In 2009 they weren’t the only friends we met along the way.

No, I don’t mean the cow statue.

Crossing from South Dakota into Iowa down I-29, the Wall Drug ads were overtaken by casino ads. These do even less for us than Wall Drug did. In the past we’ve encountered small towns in other states that allow riverboat casinos in the hopes that the added sucker-based cash flow would revitalize their respective areas. In too many cases such attempted revitalization turns downtowns into wastelands while the casino — having become the one profitable employer in town — usurps the town’s paychecks on a weekly basis as it floats down the river. We therefore made a conscious effort to buzz right through this section of Iowa…with one exception:

Quick pit stop at a McDonald’s in Onawa that tried to cash in on the roadside attraction craze, unaware that inflatables don’t count.

For now our Iowa experience was merely us cutting through its northwest corner into its western neighbor Nebraska. A bit farther south was our destination for the evening in Omaha.

Perhaps someday we can return on Arbor Day and they can explain its significance to us.

Our intro to Omaha. Apparently it was crane season in the Cornhusker State.

We were all too relieved to arrive at our next hotel, just in time for rush hour and glad to be off the road for a few minutes. Inside the hotel, though, the crowds were just as thick as traffic had been. We try to foresee as many complications as possible whenever we select our vacation dates, but our calendar was set in stone before we learned that we were in Omaha the exact same weekend as the 2009 College World Series. Every hotel in town was booked, and prices were sky-high.

How bad was it? Bad enough to pause here for fun trivia: in our entire road trip history from 1999 to the present, even including our drives to various comic/entertainment convention scenes in other states whose attendance often numbers in the tens of thousands, our visit to Omaha is the only time that a hotel has ever canceled our reservations without telling us. We’ve heard such stories from others throughout the years, but we’d never experienced it for ourselves till Omaha. So far it’s never happened again.

The other hotel options all had equally alarming prices, but I had to pick another one. We refused to be deterred because Omaha has the greatest human attraction of all: our friend Chris, gentleman and scholar. This would be a special reunion — the last time we’d seen each other was among the group that made it to 2002’s Star Wars Celebration II. 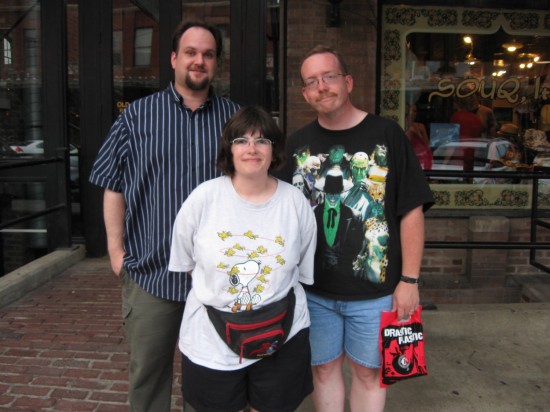 Photo by my son, our backup paparazzo.

Our local main man had graciously offered to meet us at the hotel and ferry us around town for food, folks, and fun. Dinner was at a refined establishment called Anthony’s Steakhouse. We could tell just by looking at the roadside cattle on its roof that it was where we were meant to be.

We normally don’t eat at fine steakhouse level on vacation, but all those repetitive yet free hotel breakfasts had helped us rein in our budget most of the week, and we’d spent far less on souvenirs than we’d expected. Besides, the combination of wonderful host and real Omaha beef looked winning all over.

After dinner Chris drove us around town for some sights and chatting and simply resting in his nice car that I didn’t have to drive. That alone was a treat for me. For a variety of reasons I do all the driving on our vacations, unless you count the little mini-trains that run from amusement park entrances to amusement park parking lots. Letting someone else take the wheel for a while was especially comforting after having driven 500+ miles from Rapid City in a single, epic-length, totally draining haul.

For a chance at walking and culture, Chris took us on a stroll through Omaha’s charming Old Market, a neighborhood of craft shops, art studios, restaurants, and other indie businesses gifted with creative architecture.

In our fatigue we didn’t take many photos, but this charming alley sums it up.

The non-architectural non-fine-art high point for me was Drastic Plastic, a CD shop that had albums I don’t have. It stands to reason that a large city like Indianapolis would have decent music stores somewhere around here. Problem is, if it does, they’re not in the parts of town I ever see. My son looked through their band shirt selection and failed to find anything to his liking, and reconfirmed Linkin Park only ever really let him down in the area of shirt designs. I bored my wife with flipping through CD rack after CD rack — not exactly her area of interest. It didn’t take long for a want list to stack sky-high in my head, so I had to cut myself off after ten minutes (15? 20? whatever — like I was really looking at my watch anyway) and finally had to be dragged away from the shop with copies of Soul Coughing’s Ruby Vroom and the Pop Will Eat Itself best-of/remix album Wise Up, Suckers.

Thankfully it wasn’t all about me me ME. The Old Market had stuff for everyone else to buy, too. Amid all our wandering and browsing and art appreciation, Anne got her mandatory Nebraska souvenirs and my son found candy.

Eventually, because sometimes life sucks, we had to part ways with our gracious host and there was sorrow. And hours’ worth of exhaustion. But mostly sweet sorrow.