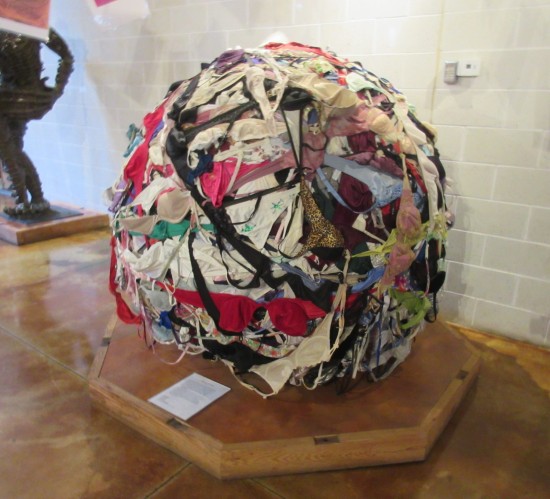 Remember on Pee-Wee’s Playhouse when Pee-Wee kept a collection of either foil or rubber bands mashed together into a ball, depending on which season it was? This is Emily Duffy’s 1800-pound “Bra Ball“.

Whenever someone asks us about our Baltimore vacation and lets us speak for more than fifteen seconds, if they’re patient we’ll tell them the part where we went beyond the Inner Harbor and spent two hours wandering the grounds of the American Visionary Art Museum. We’ll try to describe the captivating fun of roaming a trio of facilities dedicated to self-taught art, to imaginations and handicraft that eschew folks traditions or identifiable art movements, about the outlandish and the whimsy, about the inherent coolness of DIY ethos writ large and embraced to the fullest. Then their eyes will glaze over and they’ll change the subject because trying to describe unique art they’ve never seen is a bit like reviewing a Taylor Swift album for an audience that’s never owned a radio.

I guess you just had to be there. Or scroll through the photos from someone who has.

Of the three structures, the Tall Sculpture Barn — the one in the middle — is free. That day the main floor was emptied out, but a few pieces loomed overhead and welcomed us before the kindly staff did at the main building.

…I believe the monstrous doggo’s name is Fifi?

Covering the ceiling are enormous panels from William Thomas Thompson’s “Seven Days of Creation”. And of course a disco ball.

The main building is three stories of art, more art, and then art. We previously showed you some of the outside and the temporary food exhibit. The AVAM has over 4000 pieces in their permanent collection, rotated in and out of active display as needs and moods dictate.

…and this was just the men’s room mirror.

The most prominent indoor piece is Andrew Logan’s “Black Icarus”, which flies and twirls amid the rising staircases. Loagn is better known to locals as the co-founder (along with the late Divine) of the Alternative Miss World contest.

An untitled septych by James Franklin Snodgrass, best known as a 1950s quiz show contestant who helped expose the behind-the-scenes chicanery of Twenty-One. 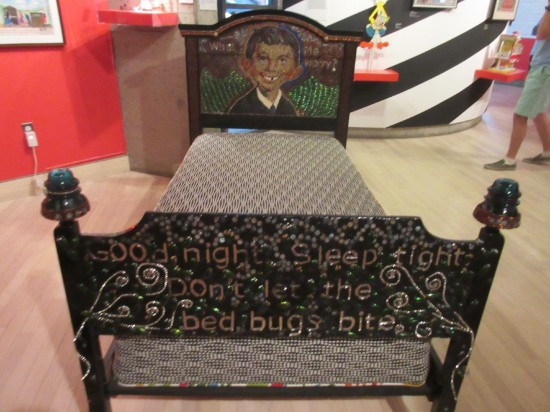 For the MAD Magazine fans out there: “What Me Worry Bed” by Patty Kuzbida, a retired lab technician.

“The Light Bringer” by Ingo Swann, an alleged psychic and master of astral projection.

Wayne Kusy, now working in the insurance field, once spent 2½ years constructing this scale model of the Lusitania using 193,000 toothpicks.

Anne in a moment of restful contemplation in a figurative garden.

“Always Remember You Are the Child of King” from the mind of Gregory Warmack, a.k.a. Mr. Imagination. 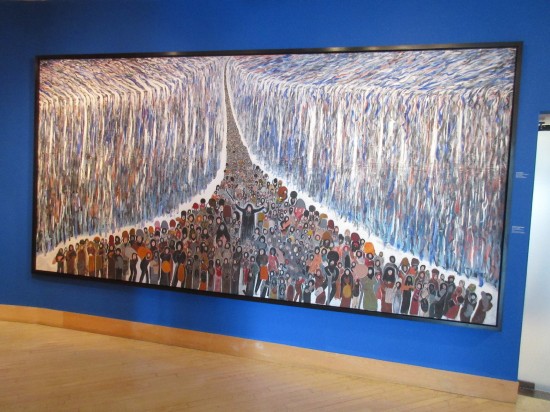 Up on the third floor was a temporary one-man devoted to Reverend Albert Lee Wagner, who came into art and into an informal congregation of sorts late in life. His most eye-catching piece was “Flee From Egypt – Parting of the Red Sea”.

More art awaits viewers in the basement, including the ostentatious “Flatulence Post” by Bob Benson, whose central working button mercifully invokes a tribute more of sound than of smell.

On the south end of the AVAM campus is the third building, the Jim Rouse Visionary Center. Much of it is devoted to tiny animatronic gizmos and dioramas, but a number of whopper-sized sculptures also take advantage of the wide space and high ceilings.

One of the more complicated dioramas, most of which are interactive and allow visitors some button-pushing fun. 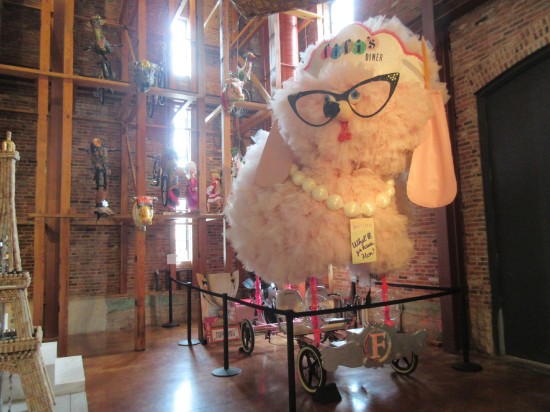 Another Fifi of equal stature. Perhaps they’re twins, and maybe the first one we saw was actually named Mimi. 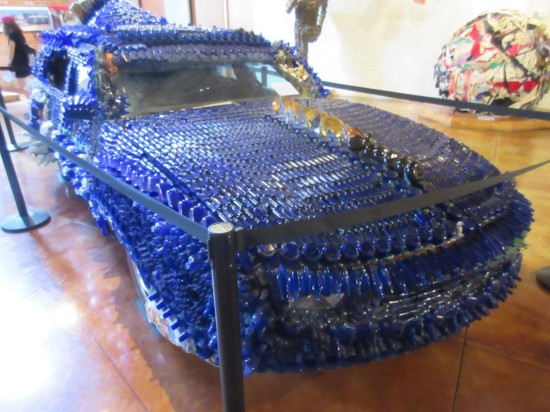 And your greeters at the door, “World’s First Family of Robots” by DeVon Smith — a WWII veteran, world-record-holding hitchhiker, and avid sci-fi fan.

…and these are all merely display items. I haven’t even shown you my favorite part of the AVAM yet.