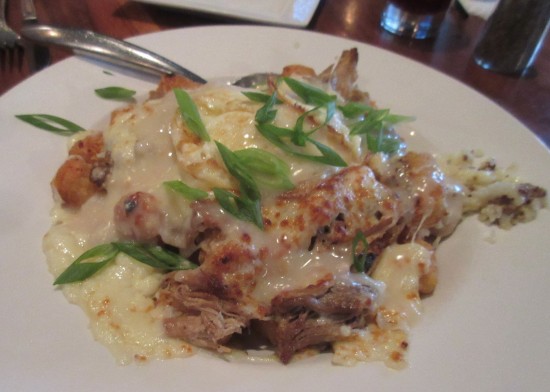 Previously on Midlife Crisis Crossover: my wife Anne and I attended our ninth Wizard World Chicago up in Rosemont, IL, where the fans are fun, the festivities are fantastic, and the food is frightful. With rare exceptions, convention center food is never a highlight on any of our con experiences. The Chicagoland area itself has no shortage of top-notch restaurants, but virtually none of them are next door to the con. Unless you’re willing to settle or to pack a few days’ worth of picnic food to take along, you’ll have to search your surroundings and possibly venture a bit from your hotel if you want any sustenance beyond lukewarm pizza, bags of chips, or the McDonald’s a half-mile down the way or the Dunkin Donuts another half-mile past that.

This year we scared up three meals worth savoring — two of which validated our convention center parking without making us regret the food itself, and one a bit further down that served as a delicious capper to our weekend.

On the other side of the convention center’s official parking garage is MB Financial Park, an entertainment district that’s the pride and joy of Rosemont. In addition to a movie theater, bowling alley, and comedy club, a series of restaurants offers dining alternatives to any con-goers who need a bite to eat and still have the energy for one last long walk. All of them will validate your parking, but not all of them are equally talented.

Our Friday night dinner at Adobe Gila’s was our second visit to their establishment. Prices aren’t bad, and their Mexican fare isn’t the most wildly daring. They don’t hold a candle to our favorite place back home. But when you’d been on the run for eight to ten hours, jumping from line to line to line to shopping aisle to line to line to line, even “not bad” food is a welcome respite.

The view from the elevator exit.

Adobe Gila’s is on the second floor above an ice cream shop. We looked at the stairs, moaned after our long day, and chose the alternative. 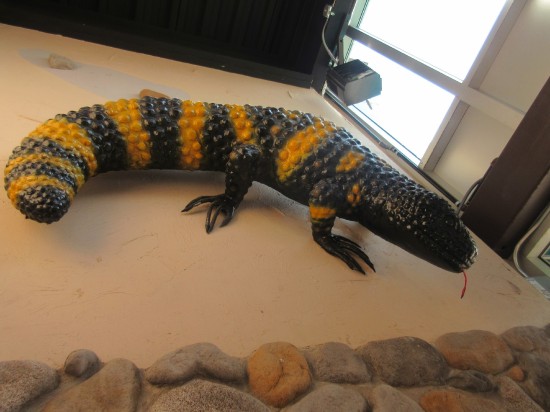 The joint would be 100x cooler if they had a guy dressed in a seven-foot-tall fuzzy gila monster costume wandering the floor and making up songs with the word “adobe” in them, but I guess this sculpted critter hanging above the elevator is okay.

The nachos were an in-joke on the Wizard World Chicago unofficial discussion group on Facebook, but also came with your choice of dips.

One problem with showcasing Mexican restaurants: their dishes tend to look alike. A blackened tuna burrito sounds off the beaten path, but from the outside, for all you know there could just be rice and beans in there. 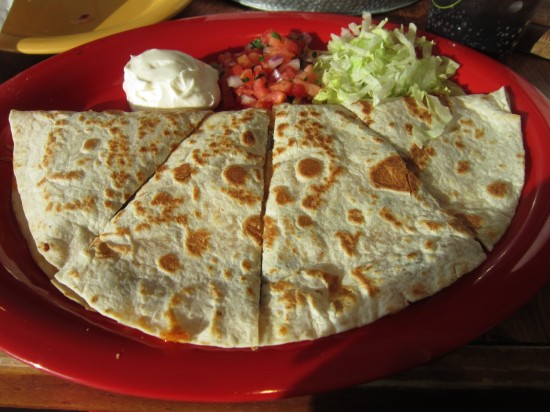 Same problem with Anne’s steak quesadilla. “Yep, that sure is some toasted tortilla there,” said yawning onlookers.

Saturday night dinner was a bit more lively, at a gastropub called Park Tavern. We skipped it in previous years because the bland name gave us the impression it was just a bar. We don’t drink and didn’t care. This year we gave it a try and let the menu surprise us. It’s a bit more expensive than its surrounding competitors, but our budget was boosted a bit by a major guest cancellation at the con and an anemic Artists Alley that inspired very few impulse buys.

The Animal Tots in our lead photo offered the best bite we’ve ever had at MB Financial Park, bar none. If we’d known how sinful it would be, we wouldn’t have bothered with main courses. But we did, and we finished as much as we could.

My dinner: crispy lobster and fried shrimp banh mi. topped with pickled daikon and carrots, jalapeno (which I removed — not in the mood), cucumber, sriracha aioli, and cilantro-basil vinaigrette. Very spicy, but I had to abandon the last few square inches of flatbread.

For some reason we both felt like challenging ourselves and ordered Brussels sprouts as side dishes. Gourmets keep insisting they’re awesome, but I’ve rarely enjoyed them. We ate so few that we took nearly a pound of them home. We found that they’re a bit more palatable if you throw them back in the skillet, toss them with some bacon, and then fry them for several extra minutes until they’re blackened and no longer taste like organic matter.

Anne would like to remind readers that “Half Chicken” is smaller than “Whole Chicken”, but you’re still not getting just a KFC two-piece meal. After we gorged on the Animal Tots, over half of this pile had to come back with us to the hotel room fridge.

Sunday we left town early because we had a family engagement that evening, and because we were on the verge of convention burnout, which is a luxurious problem to have but one we’d rather not have set in just yet, given that we’re being tempted by at least five more shows over the next three months. We can’t possibly do all of them, but we don’t want to get to the point where we’re so tired of the con scene that we wind up doing none of them. Cutting our weekend short was a bit of self-preservation in that sense, with or without the family engagement on our calendar.

As one last hurrah before we returned to Indiana, Google Maps led us ten minutes east to the affluent white suburb of Park Ridge, a nice place with nice buildings that looked a lot like the Indianapolis suburb of Fishers. It doesn’t have the same Chicago character as the Loop, but we were there for breakfast, not for touring. Our target was Eggsperience Pancakes & Cafe, one of six locations in its 25-year-old local chain. 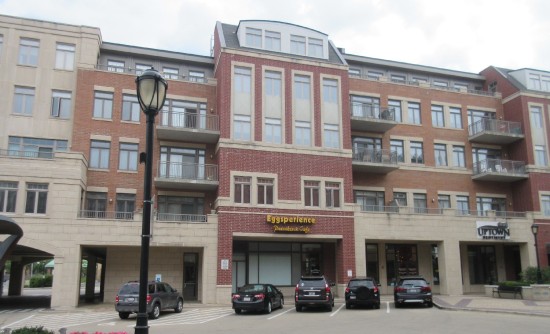 One of those nice, built-up areas where you can’t help but wonder what secrets lurk in the stories above.

Surroundings as nicely fostered as you’d expect from such a neighborhood. 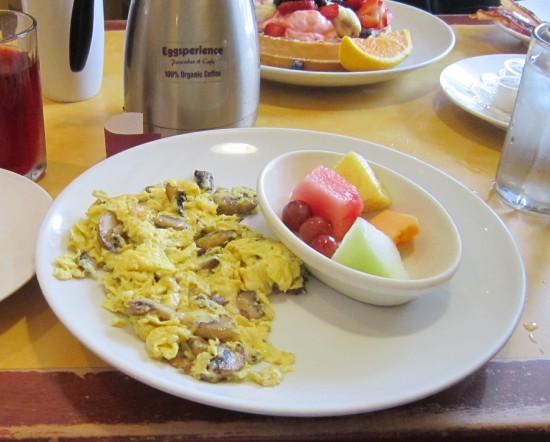 Anne’s breakfast: mushroom omelet and fruit. Basic but fine by her. 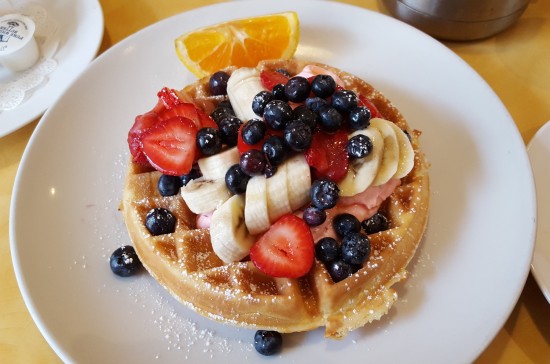 Prettiest dish of them all: the Waffle ala Yiayia’s Greek Yogurt — topped not only with the latter but with honey, blueberries, and strawberries.

Lord help me, I’ve finally reached that age when I’m beginning to find yogurt tasty and appealing. Also, I have no idea why they bothered bringing me butter or pancake syrup for a waffle loaded like that.

So that’s the story of why we weren’t suffering from convention malnutrition by the time we got home.

For those who missed the rest of the “Chicago Photo Tribute” series, previous installments are linked below for catching up at your leisure, or you can follow the “Chicago” tag for kicks. Thanks for reading!

* Part 1: Up and Up and Up
* Part 2: the Views from Above and Around
* Part 3: Art About Town, Present and Past
* Part 4: a Few of Our Favorite Little Places
* Part 5: the Museum of Broadcast Communication
* Part 6: Art from a Present Century for a Change
* Part 7: Art of the Navy Pier
* Part 8: Little Details off Michigan Avenue
* Part 9: Architecture Potpourri
* Part 10: Brief Lake Michigan Walkabout
* Part 11: Hail Hydrants!
* Part 12: Random Reasons to Visit