Psychedelic nature hydrant was one of the most eye-catching of the lot, and that’s what counts. That and the capacity for fire extinguishing.

It’s that time again! At least twice per year, Anne and I travel to Chicago to attend one of their fascinating Midwest comics/entertainment convention. This coming weekend, it’s C2E2’s turn, that gala of a con that’s as close as we may ever come to San Diego. In years past we’ve shared photos from our previous visits to the Windy City, where we like to explore the surroundings beyond the shows. With Chicago on our minds once more, and with a mile-long to-do list in front of me that’s maybe 10% complete…here’s another round of Chicago photo-sharing.

Dateline: September 28, 2013. That year we made a third excursion to Chicago without a con as our excuse, this time as part of a non-geek group tour. We’ve shared a few pics from that experience previously, including our primary objective of catching a showing at the Gene Siskel Film Center. Before that, we spent some time walking the grounds near Navy Pier, an area enlivened with sculptures and, for some reason, lots and lots of custom-painted fire hydrants.

These are a few of the hydrants we ran across that day, all of which Anne helpfully captured on camera. I think some of them are no longer there as of this writing, so maybe some of these pic are technically collectors’ items. Enjoy!

This one was officially sponsored by Navy Pier themselves. Looks like an interdimensional rift comprising several amoebae of staggering size. 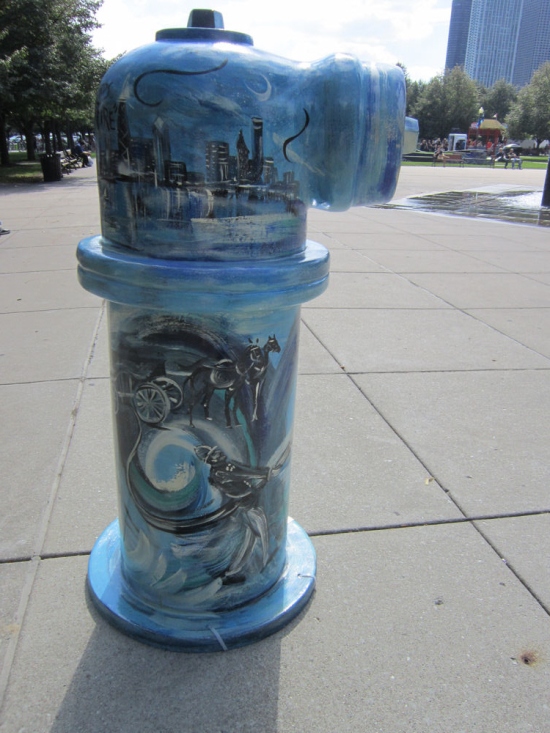 A salute to olde-tyme firefighting, with firestagecoach pulled by firehorses. Or some other themed terms like those. 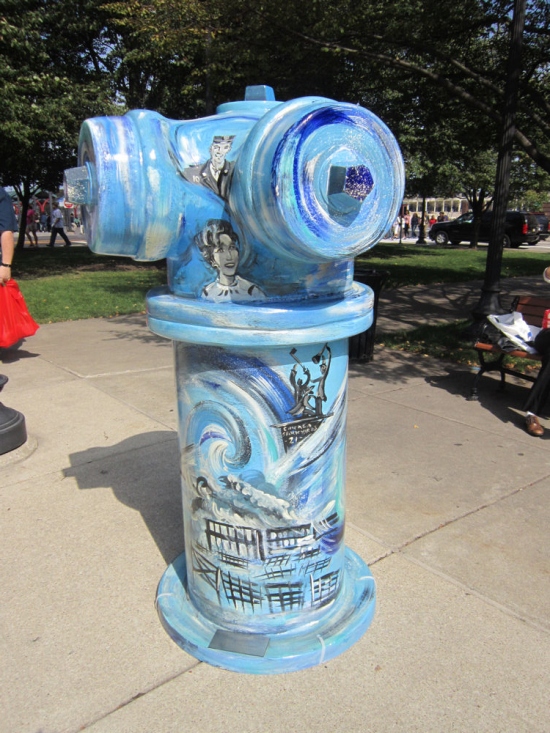 Same hydrant, different side. Just because.

Sponsored by the Chicago Firefighters Run. A different look at water from a molecular perspective. Or a most unusual fishing net. 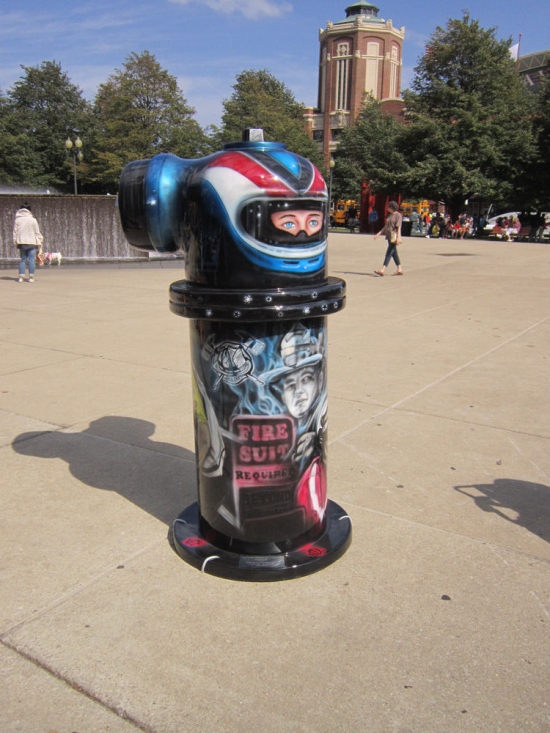 Sponsored by PoopBags.com. Far as dogs are concerned, this product placement is rather logical. 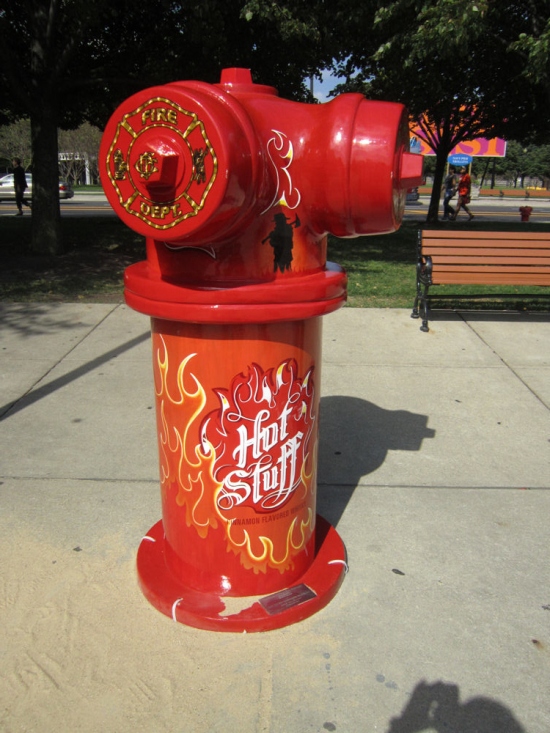 We found these last four hydrants later the same day by one of the skyscrapers near our rendezvous point. I’ve since forgotten which building, but I’m sure it was a pretty famous one. 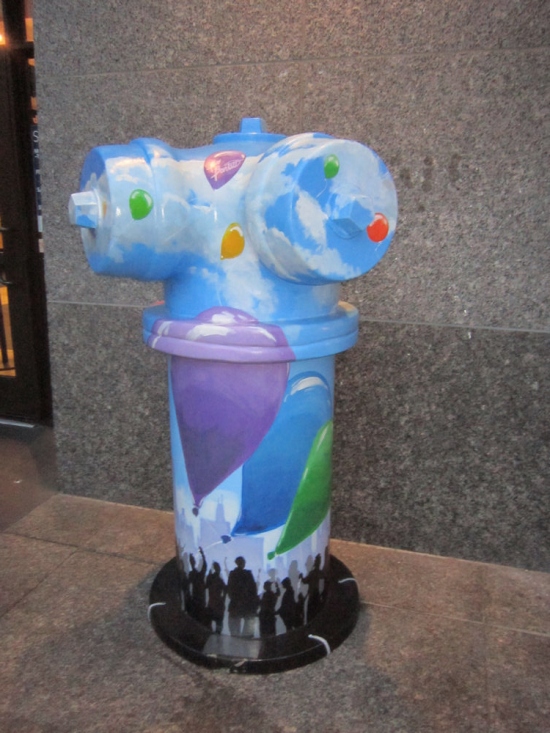 I like to imagine these are the world’s largest water balloons, set afloat by 22nd-century technology to fall and burst all over house fires. Someday, balloonist science will see us through.

Sponsored by RAM Racing and Hot Chocolate. A bit blurrier than I would’ve liked, but it says “chocolate” so I can’t just leave it out.

Sponsored by Motorola, who make a fine gateway that made it possible for us to drop AT&T DSL years ago. 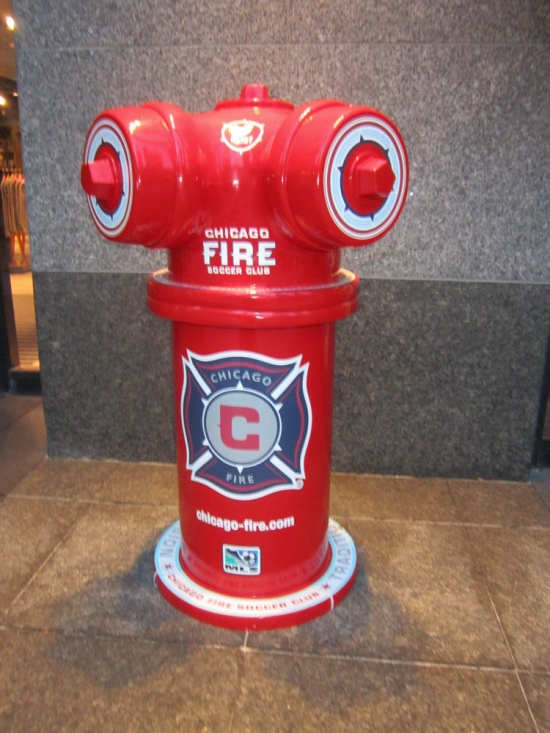 The Chicago Fire Soccer Club wants YOU to help kick fires to the curb!

For those who missed the rest of the series, previous installments are linked below for catching up at your leisure. You can also follow the “Chicago” tag for previous reports from C2E2 and Wizard World Chicago. Thanks for reading!

* Part 1: Up and Up and Up
* Part 2: the Views from Above and Around
* Part 3: Art About Town, Present and Past
* Part 4: a Few of Our Favorite Little Places
* Part 5: the Museum of Broadcast Communication
* Part 6: Art from a Present Century for a Change
* Part 7: Art of the Navy Pier
* Part 8: Little Details off Michigan Avenue
* Part 9: Architecture Potpourri
* Part 10: Brief Lake Michigan Walkabout (which included an alternate shot of the R. Kelly hydrant)