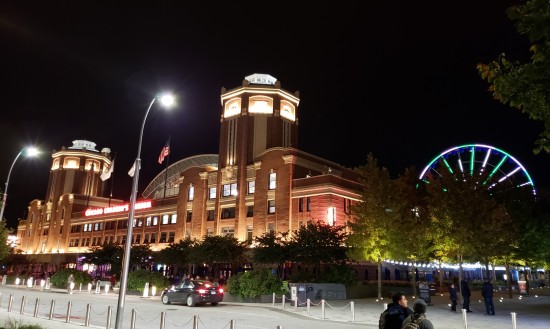 Our parting view on Friday night.

…though only one of those entries covers our sole previous visit to the Pier. First time around, we walked up and down some of it, bought snacks, photographed art, and took our leave. This time our presence was goal-oriented, the weather was unsightly, and the temptations to stop and linger were few, especially after all those miles we’d just covered on aging feet. I mean, it was a fun weekend anyway, but among the least comfortable we’ve had all year.

END_OF_DOCUMENT_TOKEN_TO_BE_REPLACED

Psychedelic nature hydrant was one of the most eye-catching of the lot, and that’s what counts. That and the capacity for fire extinguishing.

It’s that time again! At least twice per year, Anne and I travel to Chicago to attend one of their fascinating Midwest comics/entertainment convention. This coming weekend, it’s C2E2’s turn, that gala of a con that’s as close as we may ever come to San Diego. In years past we’ve shared photos from our previous visits to the Windy City, where we like to explore the surroundings beyond the shows. With Chicago on our minds once more, and with a mile-long to-do list in front of me that’s maybe 10% complete…here’s another round of Chicago photo-sharing.

Dateline: September 28, 2013. That year we made a third excursion to Chicago without a con as our excuse, this time as part of a non-geek group tour. We’ve shared a few pics from that experience previously, including our primary objective of catching a showing at the Gene Siskel Film Center. Before that, we spent some time walking the grounds near Navy Pier, an area enlivened with sculptures and, for some reason, lots and lots of custom-painted fire hydrants.

These are a few of the hydrants we ran across that day, all of which Anne helpfully captured on camera. I think some of them are no longer there as of this writing, so maybe some of these pic are technically collectors’ items. Enjoy!

END_OF_DOCUMENT_TOKEN_TO_BE_REPLACED

It’s that time of year again! A time for travel, a time for getting out of the house and out of town, a time for remembering what sunlight feels like, and a time for forgetting all about that nasty winter that we’ll all agree never to speak of again.

In two weeks my wife and I are heading once again up to Chicago to attend C2E2, that annual Midwest gala of a comic book convention that’s as close as we may ever come to San Diego. We’re also planning another walk around downtown Chicago, but haven’t decided on an itinerary. If you know of fantastic places or things around the Loop or the Magnificent Mile that weren’t covered in previous entries (see links below), we’re absolutely all ears.

Previously on Midlife Crisis Crossover, we shared photos from our visits over the years. With Chicago on our minds once more, it’s time to delve into the ol’ photo bag once more. Our last Chicago romp was last September, which was briefly covered here in an entry about the Gene Siskel Film Center, which for me was the highlight of the day.

Earlier in the day, we skirted once more along the shore of Lake Michigan.

END_OF_DOCUMENT_TOKEN_TO_BE_REPLACED

[This coming] weekend is the fourth annual Chicago Comic & Entertainment Expo (that “C2E2″ thing I won’t shut up about) at Chicago’s McCormick Place convention center, which my wife and I will be attending for our third time. As a tribute to this fascinating city, and an intro to C2E2 newcomers to provide ideas of what else Chicago has to offer while they’re in town, a few of this week’s posts will be dedicated to out experiences in the Windy City when we’re not gleefully clustered indoors with thousands of other comics and sci-fi fans.

Next on deck: our stroll through Chicago’s Navy Pier. What sounds like an off-limits military installation is in reality a stretch of public entertainment options that extends into Lake Michigan. Docked beside it are a handful of select cruise ships that offer sightseeing or party services for the right price. Budget-minded tourists like us are free to take photos and imagine the fun.