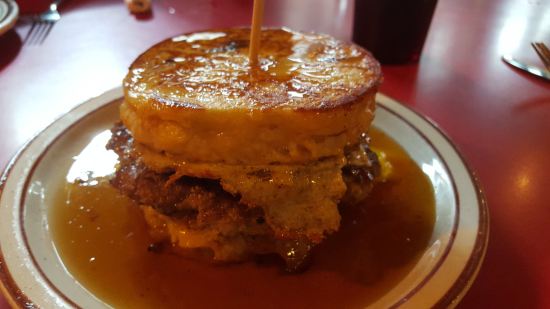 This week my wife and I have been taking advantage of our hotel’s complimentary breakfasts to save as much money as possible (their modest, cook-to-order omelet bar is a nice touch), but sometimes a guy needs a change of pace. For lunch today I drove an hour north to check out the Denver Biscuit Company, part of a restaurant triumvirate that was featured in a 2013 episode of Guy Fieri’s Diners, Drive-Ins & Dives. That’s not a show we usually consult for travel reference (thanks to a 2012 disappointment in Topeka), but this particular joint had other incentives to lure me away from Colorado Springs.

Pictured above is the Dahlia — sausage, egg over-easy, apple butter, and maple syrup on “biscuit French toast”. It’s one of several creative biscuit sandwiches they serve for breakfast and lunch. For that “Triple-D” episode the esteemed Mr. Fieri sampled their “Elmer”, topped with pulled pork, barbecue sauce, coleslaw, onions, and homemade pickles. For him I imagine it was the only logical option. But I’m a big fan of imaginative breakfasts and knew I had to try it once I confirmed it was real.

The other incentive for my mini-road trip was an invitation from an old friend.

Previously on Midlife Crisis Crossover: we took our first plane ride and lived to tell the tale. While my wife is holding up the “business” end of her “business trip” travel deal here in Colorado, I’m spending the week running around Colorado Springs and the surrounding areas, touching base with what we overlooked on our 2012 road trip. Short, on-location MCC entries have consequently been this week’s theme.

Back in the day, we used to arrange meet-ups whenever we happened to be in other states where our longtime internet compatriots live, fellow fans from Usenet and geek message boards. Throughout our road trips we’ve hung out in person with dozens of our online own in a variety of cities: St. Louis; Chicago; Omaha; Grand Rapids; Oklahoma City; Orlando; Washington, IN; Hershey, PA; and Philadelphia. We do exercise a certain amount of caution and have rules in place for each occasion in case one of them is secretly an axe murderer. (These same rules also guarantee the safety and reassurance of our companions in case they think one of us is secretly an axe murderer. Paranoia can be a two-way street.) But with the exception of one or two weird, awkward moments, our internet encounters have each been a pleasure and a refreshing change of pace from our everyday conversations back home with family and acquaintances who don’t exactly get us on quite the same level.

So when I was contacted by a friend we’d previously met on our 2007 road trip to Orlando, who now happens to call Denver home, I couldn’t say no to an opportunity for a reunion. Or to a giant biscuit sandwich.