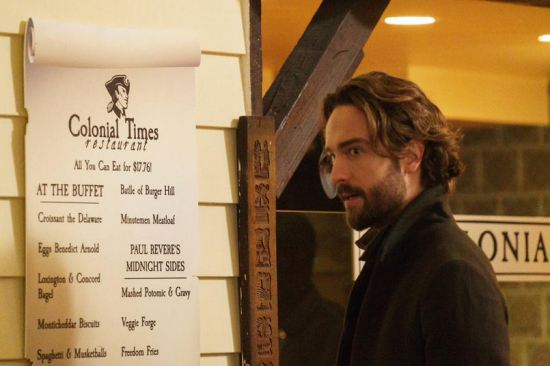 Also mentioned tonight but not pictured: the I Cannot Tell a Lie Cherry Pie. With a name like that, the first ingredient had better be real cherries.

Sleepy Hollow is back! The third season kicked off tonight in its new time slot, where it’ll be competing against ABC’s invincible Shonda Rhimes lineup instead of CBS’ Scorpion. I’m not sure this move is an upgrade. More troubling was the departure of the previous showrunners and several cast members, including the Headless Horseman and the great Orlando Jones, who’ll be truly missed. Tom Mison, Nicole Beharie, and Lyndie Greenwood are still around, joined by new cast members, new monsters, presumably a new Big Bad, new artifacts, new vocabulary words, and wacky new collisions between our man Ichabod Crane and the bemusing 21st century America. Midlife Crisis Crossover previously brought you speedy, after-show recaps of Season One and Season Two, and we’re stubbornly sticking with the tradition until it’s canceled or turns unwatchable, whichever comes first. I’m pretty okay with neither eventuality happening, really.

The season premiere, “I, Witness”, as directed by Robocop‘s Peter Weller, kept our reunion simple with a straightforward demon hunt, leavened with a flashback to a historical friend, hints of another sinister long-term scheme in the works, and a merry visit to a themed restaurant called Colonial Times, which is like a Medieval Times sequel with a longer, cheesier menu.

…After a nine-month time jump, former police lieutenant Abigail Mills is now a special agent for the FBI, a dream she’d previously procrastinated but resumed pursuing once she was convinced Sleepy Hollow would be free of magical evil for the rest of her life. She’s new enough to the Feds that she’s still getting lectured by her superiors, yet possessing a high enough security clearance to escort unauthorized strangers into crime scenes. Same as it ever was, then. Instead of cool Captain Irving, she’s taking orders from one Mitch Granger, played by special guest C. Thomas Howell, who’s two years younger than Rob Lowe but looks ten years older than him.

After the death of his fallen wife and evil son at the end of season two, a mourning Crane ran off to clear his head and rethink his role in our world, then fell right back into the Witness life, looking for leads on the next tribulations foretold in the Book of Revelations. The quest took him to his Scottish ancestral home, where an underground crypt bearing his name contained a strange tablet whose Sumerian writings led off with the title, “THE LEGEND OF SLEEPY HOLLOW”. The Sumerians saw all, knew all, foretold the coming of Washington Irving, maybe even produced other cryptic tablets that predicted other curiosities like the murders in the Rue Morgue and the great jumping frog of Calaveras County.

Crane is convinced the other scrawls on the tablet are clues to the other six tribulations. Alas, his attempt to reenter America without proper paperwork didn’t go so well, so his tender reunion with his old “leftenant” occurs only because she has to use her nine months’ worth of accumulated clout to spring him from immigration lockup. Abbie pulls the strings, our gentleman “C-Dog” throws a farewell gang sign at his ex-cellmate Jesus (a seemingly tough felon who knows the songs from Annie), ye olde Ichabbie are back together, and a new case is afoot.

Agent Abbie is summoned to the fictional Westchester National Park (hence federal jurisdiction!), where two rednecks have been savagely murdered by no mere animal. The clues add up quickly: scrapings of cinnabar, often found in demon hide (ancient scientists spent a lot of time examining and cataloging the chemical composition of demon parts); giant footprints like Bigfoot’s, except more real; signs in the corpses of extreme fear (as opposed to all other murder victims ever); an explosive response to dragon’s breath (magnesium pellets once used by the Dominican Order for demon detection); heavy slashing; and, of course, the part where they were murdered in Sleepy Hollow, the worst monster magnet since Sunnydale.

The sum of those parts: a Chinese demon called a Yao-guai — literally Chinese for “demon”, so this one should really be a specific kind of Yao-guai, but whatever. It’s played by a returning Marti Matulis, whom we last saw both as the big-bad Moloch and as the Wendigo. The Yao-guai is all about fear, and has uncontrollable cravings for two things: gunpowder and aggression. Whenever a Chinese New Year parade goes terribly wrong, he’s there. For now the reason he’s been summoned to Sleepy Hollow is unknown, as are the means of summoning and the powerful person or persons responsible for inviting him to our dimension. I’m guessing we’ll come back to that in the weeks ahead, and it’ll be the same Final Boss who summons the next eight monsters as well.

For clues Our Heroes meet up at Sheriff Corbin’s old library, whose historical government building is about to be demolished to make way for a mini-mall. They reconnect with Abbie’s sister Jenny (currently aimless and yearning for purpose) and once again dig out Benjamin Franklin’s handy sketchbook, which of course contains the Absolutely Real True Story of the Battle of Bunker Hill. The MAN wants you to think the Redcoats gave the Minutemen a hard time, but their worst foe was actually a red devil. But a new America couldn’t handle the truth, so of course they’ve covered it up ever since. Until NOW.

A passage in Franklin’s narrative has Crane flashing back to a mission he once undertook with former “partner” Betsy Ross, whose long-standing reputation as a flag maker was, of course, a popular trivia note made of LIES. In a previous episode, Crane casually mentioned that she once chased after him so persistently that he had to hide to avoid her affections. Now our slightly rebooted Betsy stands revealed as a secret warrior who went on covert ops for General George Washington all the time, brandished a sword, kicked butt, and may or may not have been closer to a once-unmarried Crane than he cares to confess. Betsy is an official series regular for season three and played by Nikki Reed, best known as Edward Cullen’s sister Rosalie from the Twilight series. So more Betsy flashbacks are in store for us, to be sure. (Twitter users can also expect to see more of her husband Ian Somerhalder, who isn’t on the show but was among those cheerily live-tweeting tonight’s premiere. Supportive husbands rock.)

In Crane’s flashback, Betsy was on a mission to deliver a message about Bunker Hill to General William Prescott. Most likely the key to defeating the Yao-guai was in that message, according to Crane’s logical leap. Jenny uses some improbable laptop-fu to discover in about fifteen seconds of online research that this very message was indeed among the inventory of Prescott’s estate upon his passing, handed down through the generations until some no-account descendant sold out and it wound up a piece of flair at the nearest Colonial Times location. One great Crane flip-out scene later (I’m taking it for granted someone will have it up on YouTube this week), Our Heroes have the note, written in a “John Jay cipher” (one of that Founding Father’s specialties), which post-decoding tells them the famous saying “Don’t shoot till you see the whites of their eyes” was referring to the “red devil”, not the Redcoats. That’s right: even Everything You Know About Famous Quotes is Wrong. In a future episode I’m sure we’ll also be told that Patrick Henry’s proclamation “Give me liberty or give me death!” was referring to a heroic unicorn named Liberty that Samuel Adams was planning to turn into unicorn steaks.

Anyway: the Yao-guai craves gunpowder and aggression, and Abbie knows just the occasion. As part of an investigation called Operation Anaconda, her FBI cohorts scheduled a raid on the secret lair of a local drug kingpin named Lorenzo Chang (James Chen), where there’ll be lots of bullets and plenty of rage. In case that’s not enough, Jenny brings along an arsenal and some loose gunpowder in case the Yao-guai gets finicky. In all the conflict, the Yao-guai murders C. Thomas Howell in front of a stupefied Chang, who’s quickly blamed for it. While the demon is offscreen for a few minutes, Chang takes hostages in a weird attempt to protest his innocence in that one crime, despite the thousands of other charges pending against him. Abbie tries to calm him down by telling him she also saw the demon, demons are real, she’s a Witness who’s seen a lot of unreal things. This doesn’t calm him down. We never see how the hostages react to hearing Abbie’s outlandish story, but I can’t wait to see if rumors start flying around Sleepy Hollow because of her blabbing.

Then the demon returns, Jenny and Crane team up against it but fail, and Abbie manages to subdue Chang and shoot the Yao-guai right in its eyeball, vaporizing it instantly. Once again, the day is saved, before any of the other FBI agents spot the giant red demon running around everywhere.

Several more string-pulls later, Abbie gets Crane’s mystic tablet freed from the clutches of police custody. Fun surprise: it’s two tablets stacked together. The one underneath is engraved with a drawing of two people that’s labeled “DESTROYERS”. Updates on this vague development as it develops. Later still, Abbie, Crane, and Jenny celebrate their victory and discuss their current situation at the local bar, where pretty much anyone with ears can hear them talking about monsters and prophecies and such. At some point Our Heroes lost the ability to keep their big mouths shut.

Meanwhile in various scattered scenes, this episode’s subplot introduces us to the other new regular, Shannyn Sossamon, last seen on Wayward Pines. She’s a witch (yeah, another one of those) named Pandora who wears a shadowy cape, can disguise herself with illusion spells, speaks fluent Greek, feeds water from a shell to a weird blue tree in a secret location, walks several miles to get to Sleepy Hollow, hangs out at the same bar at the end, and carries around a magical box (more of a “dowry”, she says) that sucks people into it. Her first victim this season in the show’s opening scene was the Headless Horseman himself, and chances are he won’t be the last. With any luck maybe Captain Irving is in there too, dying to get out and get back to being cool.