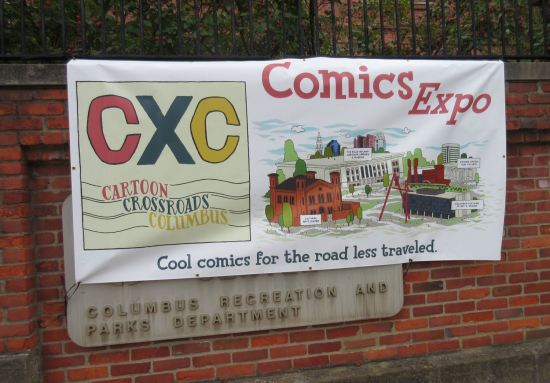 This weekend ushered in the inaugural Cartoon Crossroads Columbus, an intentionally different comics show from what we’re used to seeing here in Indianapolis. As conceived and executed by Bone creator Jeff Smith, Comics Reporter journalist Tom Spurgeon, and no doubt a sturdy support network of other talents, CXC promised no actors or celebrities, no mainstream publishers, no costume contest, no cosplay, no gaming, no super-sized convention center, no inedible convention center food, no back-issue longboxes, no action figures, and no bobbleheads. CXC was an aesthetically purified form of literary/art show about comics, featuring a lot of people who make comics better, from within the local community as well as from distant parts.

As a longtime comics fan who needs more than super-heroes in his reading list, I found their guest list intriguing and populated with the kind of principled names we’re likely never to see at a Wizard World show. I deeply regret we had a limited time frame to spend there, but my wife, who only recognized one name on the entire guest list, was happy to tag along and let me immerse myself for a few hours, even though it meant a three-hour drive each way through an unsightly rainy day. We met several creators, we attended one Q&A, I came away with a potentially fascinating reading pile, and we had just enough time left over for some bonus comics sightseeing a few miles up the road.

CXC’s itinerary was spread among five different buildings from downtown to two different college campuses. Thursday and Friday comprised numerous presentations Ohio State University, while Saturday’s daytime focus was the CXC “expo” — what other cons would call an Artists Alley — at the Cultural Arts Center. Fascinating in its own right, this historic structure was erected in 1861 as a state arsenal and converted into its current identity in the 1970s. 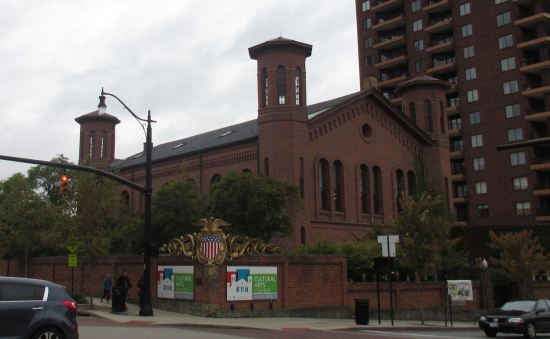 The Center has three stories, open ceilings, beautiful hardwood floors, and a courtyard outside lined with artifacts and a sofa. It seemed the perfect size and ambiance for the festivities, if a bit warm from all the bodies. The ground-level space was crowded nonstop with artists and fans alike. I should mention admission to nearly every CXC activity was free (including all Saturday events), thanks to several generous sponsors.

Tabled near the front entrance was the name most familiar to mainstream comics fans today — writer/artist Jeff Lemire, who staked a claim in the biz with creator-owned books like Essex County and Sweet Tooth before DC Comics lured him into trying corporate-owned super-hero books with their New 52 relaunch. The horrific weirdness of Animal Man (with Travel Foreman) led to other Big Two gigs, but Lemire still sets time aside for his own projects like the mind-bending, narrative-twisting, cross-time romance of Trillium, the recently launched Plutona (with Emi Lenox), and the beautiful yet jarring sci-fi drama of Descender (with Dustin Nguyen).

Naturally he had an autograph line, but a totally bearable one. The creative table arrangements made for some odd flanking in our pic. 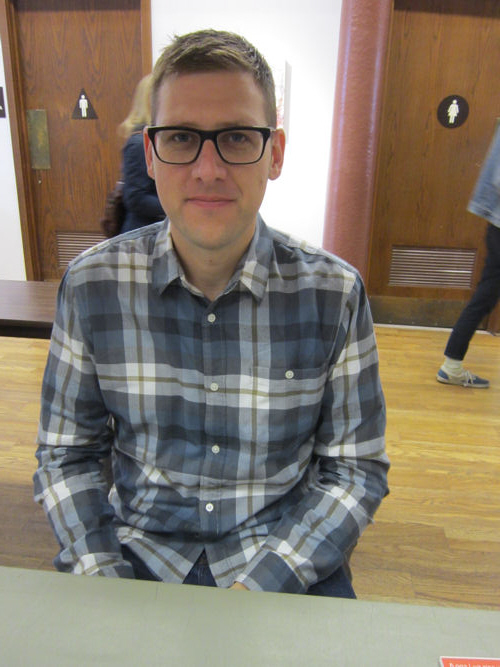 He signed my copy of Lost Dogs and added a quick sketch using the old-school combo of dip pen and bottled ink. I don’t think I’ve ever watched an artist sketch with one of those at a con. I don’t think I’ve even seen a dip pen since high-school art class. For that momentary nostalgic art thrill alone, the long drive was worth it.

Three of the biggest names in the house showed up at the other end of the floor — the aforementioned Jeff Smith (with hat), renowned indie editor/publisher Françoise Mouly (with scarf), and her husband Art Spiegelman (with vest), whose two volumes of Maus are among the very few graphic novels that my wife, my son, and I have all read. That area seemed more crowded than any other in the Center, but Anne tried her best to take a pic before Spiegelman left to attend other matters. And in a space this cozy and literary-minded, I began to feel self-conscious about us taking too many pics. 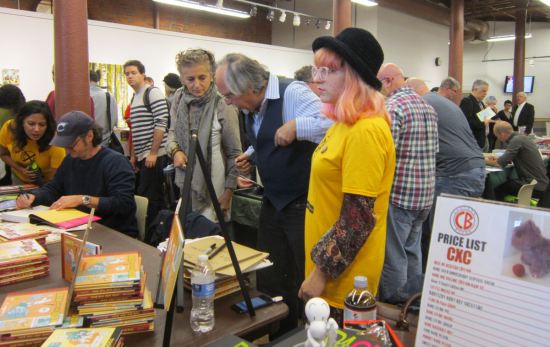 Unfortunately all the best speaking engagements with these comics legends were scheduled on Friday when we couldn’t get out of work, or Saturday evening after we needed to return home. I’ll be kicking myself for missing those grand opportunities for some weeks to come, but our allotted time in Columbus was what it was. Thankfully the official CXC Twitter account live-tweeted the Friday night presentation, and I understand video was shot of the Saturday night finale, which I’d love to see if/when it’s available online.

Our limited presence means this entry is obviously not the definitive recount of the full CXC experience. At the very least, though, I was elated to show up, see what Year One looked like, and donate over supportive wads of cash to creators in person, like a Kickstarter but with instant tangible results. All told, I can say it was a pleasure to meet and buy from Lemire, “Derf” Backderf, Dara Naraghi, and Keiler Roberts, among others. (Full disclosure: Tom Spurgeon’s Patreon supporters were treated to an incisive interview with Roberts shortly before CXC that sold me on her book Miseryland in advance.)

Derf won my personal award for Best Banner of Show, with his copious use of the Ramones.

CXC also took advantage of the Center’s other two floors for more in-depth purposes. While podcast interviews were conducted up on the third to a limited audience, the second was used to host a conversation series with assorted guests. We attended the one whose work I’d read the most: Grace Ellis, co-creator/co-writer of the surprise hit series Lumberjanes. 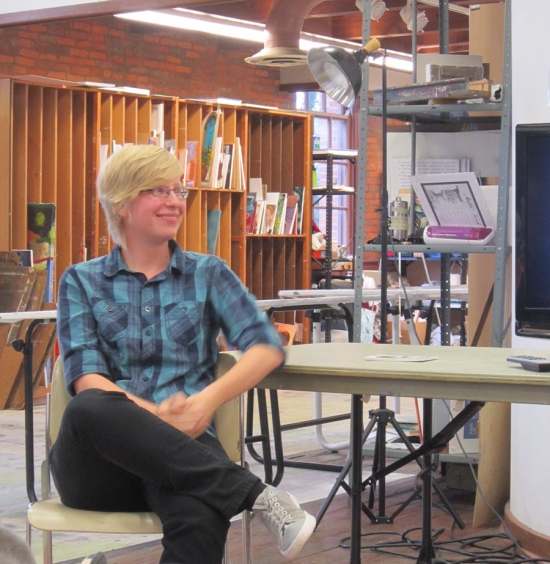 If you’ve never read an issue of this all-ages series that reimagines the Girl Scouts as plucky action-adventure heroes, here’s an excerpt from #5 that captures its best elements in no particular order: optimism, surprises, danger, bravery, and monsters. 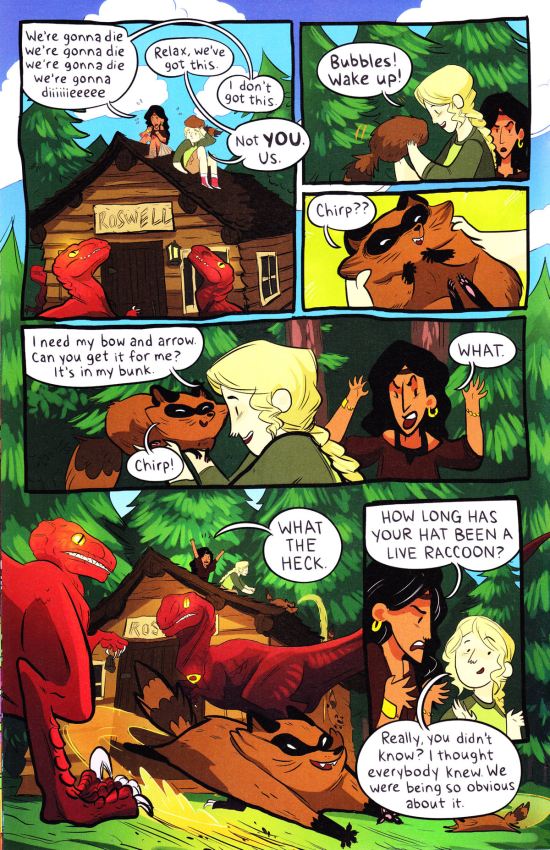 It’s extremely rare for me to have the opportunity to witness a comics Q&A conducted by an interviewer with Spurgeon’s professional qualifications, so it was refreshing to hear prompts beyond the insight level of “Where do you get your ideas?” or “Which Marvel/DC characters would you love to write?” or “What actors would you cast in the movie version?” Random tidbits from their chat:

* Ellis attended OSU for as long as she could; her writing background was primarily in the theater. Lumberjanes #1 was her first published comic. Each medium has its own requirements, but her editors and co-writer Noelle Stevenson have given her quite a learning experience.

* “Lumberjills” was already taken by actual loggers who kept the chopping industry going while all the manly woodcutters were fighting overseas during WWII. (My wife’s a massive WWII buff and made a point of stopping by Ellis’ table later to express her gratitude for this heretofore unknown-to-her wartime trivia.)

* She set aside an entire day just to write the Lumberjanes Pledge for the first issue.

* Ellis now has a much longer list of comics ideas than she did before the series began. She hasn’t ruled out autobiographical or more “adult” works in the distant future, but for her right now the watchword is “fun”. She and co-creator Shannon Watters are working on their next project, which is officially in its nascent too-soon-to-talk-about-it stage.

* Their publisher, BOOM! Studios, is a pleasure to work with, though she admits she has no other basis for comparison in the field.

* Lumberjanes has been optioned for live-action Hollywood treatment, because that’s a kind of thing BOOM! really loves to make happen. Ellis isn’t actively involved in its development and diplomatically hopes it’s great and that it sells a lot of Lumberjanes books.

* She’s among the millions who highly recommend the new hip-hop Broadway musical Hamilton, concerning the life of Alexander Hamilton, which in the past two months has become the New Thing I’ve Never Heard of That Everyone Keeps Talking About. Consider yourself notified: Hamilton is hereby a Thing.

After taking our leave of CXC we’d hoped to walk around downtown for a few minutes of basic tourism (e.g., the Ohio State Capitol down the street), but the rains that had dogged us all along I-70 finally arrived and dashed those hopes. This giant gavel was the only non-comics attraction we spotted before Mother Nature tried to wash us down the sewers. 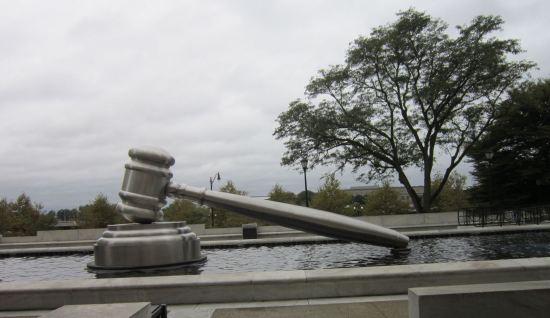 Its sculptor has the same name as the actor who played Moriarty on Sherlock. Let’s all pretend that’s relevant somehow.

After lunch, we weren’t done with comics yet. Our last Ohio stop for the day was up in OSU’s Sullivant Hall, at a topical repository called the Billy Ireland Cartoon Library and Museum. CXC’s activities dovetailed nicely with a strong recommendation from writer/cartoonist Evan Dorkin that I’d read two weeks ago. Also, like CXC, admission is free. Its inclusion in our short Columbus day was a no-brainer. 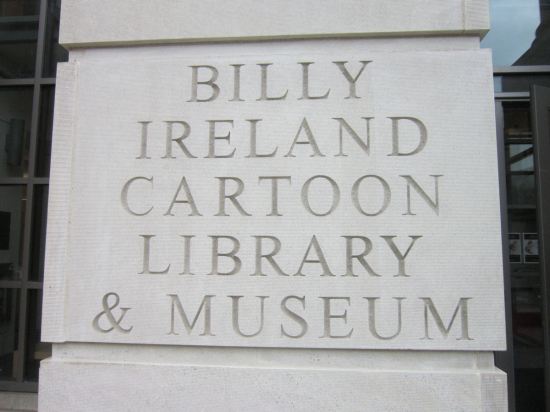 Dorkin was treated to an exclusive behind-the-scenes tour, but the public displays are sufficiently worthy for comic art aficionados. After a courtesy docent greeting your first sights are the drawing-room furniture of Dick Tracy creator Chester Gould. 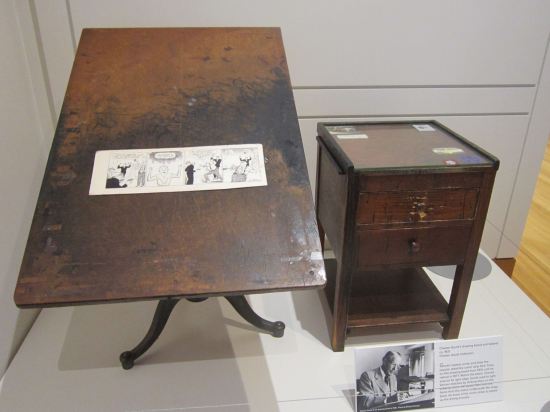 Delightful discovery: a Calvin and Hobbes Sunday strip in which you can see where Bill Watterson decided the title panel had too many spotty shadows for his liking and remedied the details with some whiteout. 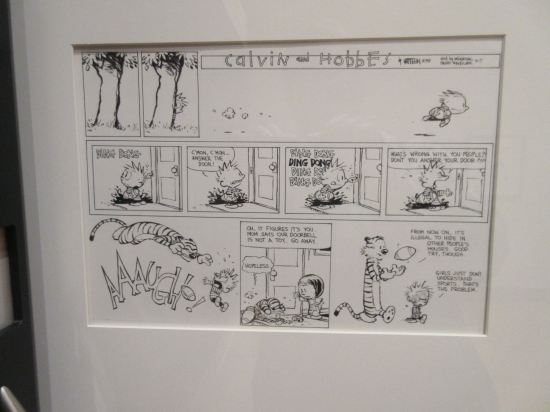 This damaged Charles Schulz Peanuts page cries out for a plaintive Martin Scorsese speech about the importance of art preservation. I winced hard when I noticed the rips. 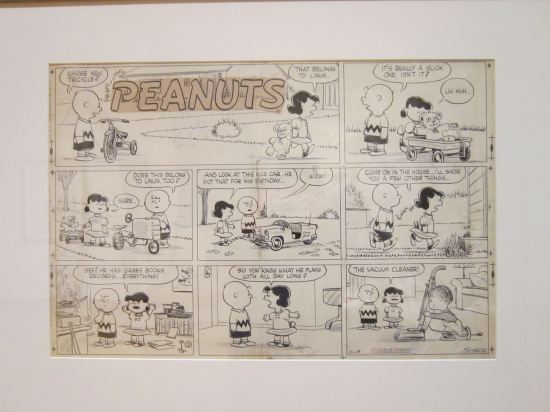 Other rooms featured walls and displays of WWI political cartoons, local political cartoonist Billy Ireland, and a retrospective on Puck, the first American humor magazine. Those subjects were largely new or ignorant territory for me, but I enjoyed the exposure and I wrote down names like Joseph Keppler Jr. and Nell Brinkley that I need to know more about at some point.

Their backroom archives are vast but require prior arrangements to access specific materials. The museum has an extensive reading room, but it’s closed Saturdays. I tried not to kick the walls on my way out. I love that there’s a college with seminar halls named after Will Eisner and Charles Schulz.

Normal art museums are fine, but visiting comics museums would be my primary nonstop post-retirement activity if we can open hundreds more of them nationwide by then. See to it, America.

Thus concluded our joyous comics day in Columbus, as we resigned ourselves to the comicsless three-hour drive home. I trust all other attendees had a wonderful time and availed themselves of the astounding opportunities afforded by this festival. I can’t wait to hear next year’s lineup, though here’s hoping for sunnier weather in 2016. Until then, I expect I have some quality reading ahead. 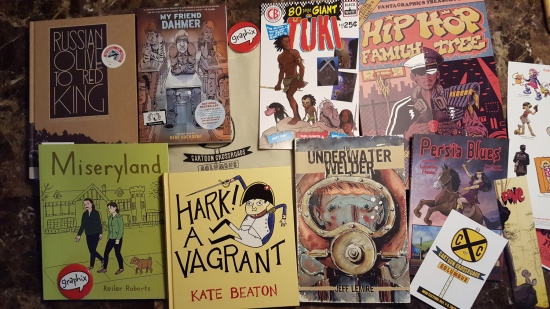