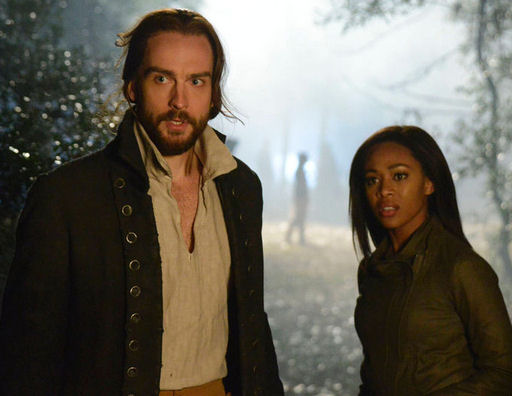 Less than three months until the season premiere of Sleepy Hollow! It’s been six months since the season 1 finale, but news and notices are popping up more and more as our heroes Lieutenant Abbie Mills and Professor Ichabod Crane prepare to return to active duty against the forces of the Headless Horseman, the demon called Moloch, the undead John Cho, and the mastermind behind them all, whose identity I should maybe not spoil for the sake of anyone planning to catch up on the series over the summer.

Today’s major news: Sleepy Hollow is coming to comics in October! Major indie company BOOM! Studios — whose current publishing lineup includes Adventure Time, Regular Show, Bravest Warriors, Robocop, Big Trouble in Little China, and the quirky creator-owned hit Lumberjanes — has secured the license to bring Crane, the Mills sisters, the Irving family, limbo-bound Katrina Crane, and the late Sheriff Corbin’s fatherly flashbacks to my favorite medium. (Sorry, movies. Missed it by that much.) The creative team of Marguerite Bennett and Jorge Coelho will have four issues to tell new stories that take place between various season-1 episodes, maybe filling in some gaps and finding ways to go all-out gonzo in print without having to worry about a strict TV budget. 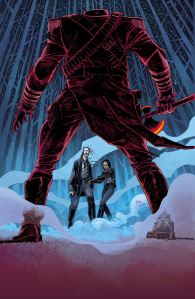 Sample cover from the upcoming comics. Art by Jorge Coelho.

New comics aren’t the only Sleepy Hollow news we’ve heard during the long, long, long gap between seasons. You may or may not have run across the following headlines in recent months:

* Casting news #1: Victor Garber (Alias, Titanic) will appear in at least four episodes as Ichabod’s father. It remains to be seen whether he’ll be the supportive kind of 17th-century dad or the disapproving taskmaster that many special-guest-star TV fathers tend to be.

* Casting news #2: Heather Lind (Turn, Boardwalk Empire) will show up as one of Ichabod’s old ex-girlfriends from way back when. No idea yet if she’ll be a mere mortal, another time traveler, another limbo dweller, another member of the Sisterhood of the Radiant Heart, or The Real Mastermind Behind It All.

* Nicole Beharie is hitting the convention scene! Last October she was at the New York Comic Con, and this August she’ll be at Wizard World Chicago, which was already on our itinerary before her name was added to the guest list. My wife and I may have to stop by her booth that weekend, as long as her line isn’t longer than Norman Reedus’. If you’re nearer to the UK, she’ll also be appearing at MCM Birmingham Comic Con on November 22-23. If you’re outside England or the American Midwest, here’s hoping more con announcements are forthcoming.

* The official Sleepy Hollow Facebook page has been providing behind-the-camera photos from the spooky sets of season 2, which so far appear to be made entirely of forests. Set pics are always nice for tiding fans over while their favorite shows are on vacation.

* Sometime this past spring (I forgot to note the date), the word “acephalous” was the Merriam-Webster Word of the Day. Not that they were overtly celebrating the show, but I thought it delightfully apropos for future MCC recap use. If you know what it means, it’s not hard to imagine where it’ll fit into Sleepy Hollow discussions.

* Sleepy Hollow merchandise is now a thing! At the end of May, my wife and I spotted an Ichabod Crane T-shirt in the ladies’ section at a local Hot Topic. Yes, we may be old, but we sometimes stop in and envy their T-shirt selection. 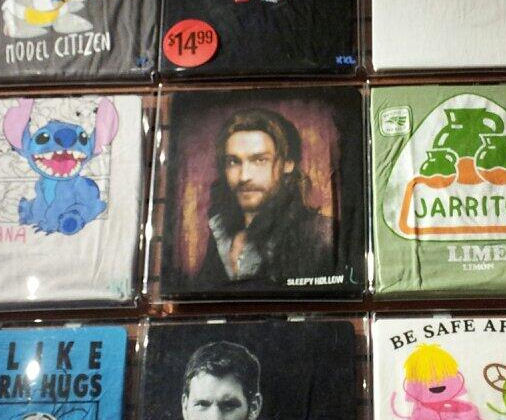 Mark your calendar if you haven’t already: season 2 of Sleepy Hollow premieres September 22, 2014, on Fox in its same old time slot at 9 p.m. Eastern. At some point it’ll be joined in the 8:00 slot by its new roommate, Gotham. So there’s one long TV night full of wild, action-filled darkness.

Until that evening arrives, you still have time to splurge on the DVDs, watch it streaming through Google Play or Hulu, and/or skim our previous MCC Sleepy Hollow recaps, listed below for handy reference. Enjoy!