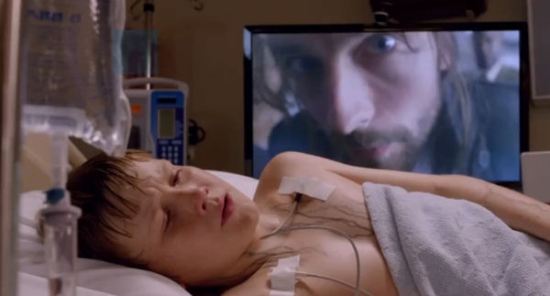 BIG ICHABOD IS WATCHING YOU. Even though he has no idea how it works.

The fifth episode of Fox’s Sleepy Hollow, “John Doe”, tosses a few new elements in with some things missing from recent escapades. Ichabod reunites with Katrina; a new Horseman steps onto the game board; another early American legend is revealed as more than it seemed in your history classes; and, as with such movies as Outbreak, we confirm that diseases can be a really dull antagonist.

For those who missed out, my attempt to streamline the basic events follows after this courtesy spoiler alert for the sake of time-shifted viewers.

Speaking of time-shifted people: meet little Thomas, one of many residents of the lost colony of Roanoke. (Link enclosed right here for the WikiPedia recap, if you’re new to that strange 16th-century event. History class was never my forte, but even I remember learning about that one in school.) At last, Sleepy Hollow reveals the truth behind Roanoke that The MAN didn’t want you to know: the entire colony was infected by the horseman called Conquest, a.k.a. Pestilence! Early historians probably kept that out of the textbooks because it was just too cool a fact for young minds to handle.

Conquest, all bedecked in samurai armor, cursed the island with an abominable plague that would rack up enough of a body count to grant him ingress to our world. Little did he count on the saving grace of the spirit of the late Virginia Dare! Um…so she was a witch, too? I guess? Somehow Dare’s spirit lived on as the protector of the Roanokies and led them to another, smaller island where they would foil Conquest’s scheme, still accursed but quarantined, living on but cut off from the world in order to save it.

Down but not out, Conquest takes over four hundred years to think of sending an evil little girl to lure Thomas beyond the safety of the island’s borders and into the world of today, whereupon he infects anyone who comes in contact with him. Thus does the plague find new purchase in this mortal realm and threaten to unleash Conquest upon us all…though to be honest, his samurai gear looked more formidable an adversary — or at least more stylish — than feverish, black-veined catatonia.

Enter Our Heroes, Ichabod Crane and Lieutenant Abbie Mills. After last week’s log cabin shootout and Baptist church showdown, Ichabod has decided to take up residence in the late Sheriff Corbin’s secret cabin, though several dozen bullet holes may prove to be a long-term home improvement project. They also go shopping for necessities, but Ichabod is confounded by everyday inventions such as masking tape and plastic packaging.

Their housewarming party is placed on hold when Thomas is found, muttering only one intelligible phrase: “Euel perne.” Ichabod is called to the scene to serve as translator because the kid only speaks Middle English, Canterbury Tales style. Fortunately the esteemed history professor recognizes the phrase that means “evil girl” and hasn’t forgotten a word of it, navigating the mishmash of German fragments and archaic Thor-speak with ease. (That’s how it sounded to my untrained ears, anyway. My English textbooks delighted in providing us with only the first paragraph of Chaucer’s book in the original Middle English, as if to make sure we knew what a humongous favor the editors were granting us by translating the rest. I’m not disagreeing, mind you.)

Between the boy’s obsolete fashion — a full two centuries older than Ichabod’s own signature togs — and the clues in his delirious answers, Ichabod pieces together part of the puzzle, then puts his foxhunting skills to great detective use (because of course he has those) in retracing the boy’s steps like a slightly thinner Strider and working his way back to the secret entrance to the Roanoke witness protection area, conveniently outside the weirdness magnet that is Sleepy Hollow, NY. Meanwhile, anyone who came in contact with Thomas in the first half of the episode contracts the contagion, in increasingly grosser displays.

In the course of more Middle English discussion with the colonists (with subtitles!), albeit no sign of their beloved Virginia Dare, Ichabod surmises the solution: get Thomas back to the colony, and presto! Everyone will be cured instantly, no needles or antidotes required for all. Remember, this is more of a mystic curse than a science-based pathogen, so it’s only fair that the solution be rooted in magic logic.

Two obstacles complicate matters: 1) the need to remove Thomas from quarantine at police HQ, in which every room is guarded and encased in its own plastic zippered doors, which seems less protective than actual protective gear, but none of the cops are wearing any, only the doctors. More witchcraft, perhaps. Anyway: 2) Ichabod finds himself likewise laid low by the curse.

During his time unconscious, Ichabod dreams once again of meeting his wife Katrina, whom we learn is trapped in a purgatory (as opposed to the Purgatory of Catholic dogma or The Divine Comedy) with other lost souls. Ichabod finds he can only travel there when he’s near death. Conquest’s plague-curse qualifies.

After a scene in an interfaith chapel in which Abbie demands God give her sign (aptly demonstrating how seriously she doesn’t understand faith one whit), she turns instead to Captain Irving, who once again is easily convinced of what needs to be done, either because he’s also a witch or because he’s the most gullible policeman in town. At the same time, Abbie’s skeptical ex-boyfriend, Detective Luke Morales, decides to poke at Ichabod’s shady backstory and calls Oxford University for a reference. To his surprise and ours, they back Ichabod 100%. A curiosity for another time, then.

Anyway: to save the day, Irving arranges for ailing Ichabod and Thomas to be fake-transferred to an overflow facility, thus giving Abbie the chance to intercept their ambulance and head back to Roanoke II. Abbie jabs Ichabod with an adrenalin syringe to get him across the finish line (better this than the foul energy drinks from two weeks ago), encourages him all the way in a true test of faith, where nothing she’s doing makes any sense but it’s the thing she ought to do anyway. When merely stepping onto the island isn’t good enough, Ichabod takes the analogy one step further by immersing himself and Thomas in the village holy-water pond. Baptism does the trick, curing them and turning an oncoming Conquest into so much dust, now that he has no power over them.

Thus the day is saved! And Abbie finally admits she’s glad Ichabod is stuck in our time. It’s like they’re accepting their partnership at last. Friends might be a bit much, but we’ll see where this leads. There’s none of that irritating will-they-or-won’t-they claptrap yet, since Ichabod is still very much a proudly married man, even if his wife is technically “lost”. For now.

To be continued, then — in three weeks, according to the end promo. We’ll see you and Sleepy Hollow back on Monday, November 4th!

If you missed a previous episode of Sleepy Hollow, the last few episodes can be watched online at Fox’s official site, or MCC recaps are listed below for handy reference. Enjoy!