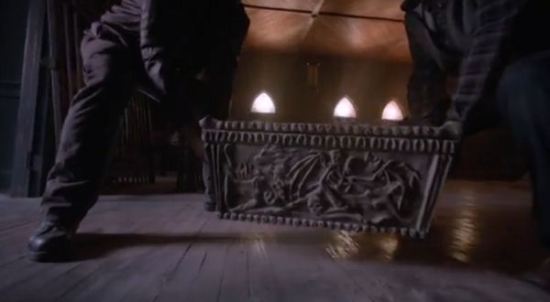 What lies within…Item 37? (Hint: it’s bigger than a breadbox, smaller than the Ark of the Covenant.)

As with last week, the fourth episode of Fox’s Sleepy Hollow contains no Horseman, no witches, no Katrina or her time loop, and no Clancy Brown flashbacks (except in one telling photo). This week was jam-packed with movement nonetheless, including a key piece of info we’ve been dying to know since episode one. The focus of tonight’s “The Lesser Key of Solomon” is squarely on the broken relationship between Abbie and her sister Jenny, who escaped from the asylum last week with an agenda of her own.

For those who missed out, my attempt to streamline the basic events follows after this courtesy spoiler alert for the sake of time-shifted viewers.

About that seemingly wayward sister, then: we already knew Jenny Mills wasn’t crazy. Tense, bitter, resourceful, scary — but not necessarily crazy. This week we learn her startling secrets: she’s also not just an incorrigible delinquent. She hasn’t been locked up her entire life since childhood. Many years ago she was was caught shoplifting by Sheriff Corbin (an identical origin to Abbie’s own, in fact), who believed her story of seeing a demon in the woods when no one else had her back. His extensive supernatural library and prior knowledge of Sleepy Hollow’s magical underground certainly helped. Over time Jenny would become his globe-trotting gofer, traveling around the world on missions he gave her, usually to retrieve abnormal artifacts and whatnot — his own private Lara Croft, so to speak.

Only recently was Jenny recaptured and moved to local quarters, all apparently part of her plan. After last week’s ceiling escape (which seems like the kind of obvious escape route a modern facility would predict and seal off, but too late to shut that barn door now), Jenny retrieves her stash of weapons and supplies from a bartender friend’s safe and heads out to a cabin in the woods that Corbin owned and used to store an odd possession or two. In this case it’s a 250-year-old sextant with a built-in projector (just add light) ideal for revealing complicated treasure maps written in invisible ink on the backs of nearby paintings. I’m sure the U.S. Patent Office has it listed as patent #7, right after reusable false teeth.

At the cabin is where Abbie and Ichabod finally catch up with her. After an A-plus opening scene between Ichabod and a helpful Northstar Assistance call center rep named Yolanda (in exchange for unlocking the car and providing a crash course in modern car radios, Crane offers her relationship advice in that British accent all the ladies luuurve), Our Heroes try thinking like Jenny and end up consulting her seventh and final foster mother, who’s neglectfully evil (as all TV foster mothers are, alas), but knows enough about the cabin to point them in its direction. Ichabod has to negotiate a gunpoint standoff between the two sisters, but barely convinces them they’re largely on the same page. That accent has so many constructive uses.

The trio locate the sextant, which sends Ichabod into a helpful reverie about a major mission he once conducted at the request of General George Washington. On that fateful day of December 16, 1773, Washington ordered one group of men to storm Boston Harbor and begin dumping boatloads of tea into the sea — partly as a protest, but mostly as a massive distraction from the real mission. Yep, that’s right — your history books lied to you again. During “the destruction of the tea” (as Ichabod says it was called before historians got creative), several other men escorted Crane to another boat, which held a powerful item in the wrong hands. Unfortunately that item was locked in an evil chest and guarded by a towering Hessian that Ichabod finally realizes during this flashback was none other than the Horseman himself. Dun-dun-DUUUUN.

Alas, an unhelpful explosion took out everyone else on the mission except Ichabod, but the chest and its contents were theirs. Washington and his men had a very simple plan for said chest: they stored it inside a fireplace inside the local Dutch Reformed Church, bricked it over, and drew a map to that location on the back of a painting in invisible ink, in the thoroughly unlikely event that they changed their minds and wanted to open it someday. Bricking it up to keep the bad guys from ever finding it again seems a logical move, as long as they never find the sextant and the map and put two and two together. Even if they did, there still would’ve been the matter of finding a proper light source 250 years ago to activate the sextant.

Once they pull out the sextant, Ichabod spends mere seconds thinking about it, turns over the nearest painting hanging in Corbin’s cabin, sets a modern flashlight against the sextant in the position intended by its inventor, and — presto! — reveals the hidden map on the back of the painting. It’s a good thing Ichabod is on our side. And sure enough, marked on the map is the location of the chest.

His photographic memory latches onto another handy tidbit: the artwork he saw on that chest 250 years ago matched the artwork on the cloth wrapped around the sextant. Because in those days, if you had two or more magic items that were related, you had to make sure their accessories matched. That way, if you were wealthy enough to stockpile a collection, you’d never forget which items went together. Woe betide he who tried combining the wrong items, for that was a good way to cross the streams and have them blow up in your face. So sometime more than 250 years ago, someone a little more careful went to a seamstress, ordered one sextant-sized dropcloth, and insisted that it bear the same markings as the lid on this giant evil chest he had sitting in a guarded closet back at home base. Whoever this precursor to Betsy Ross was, she was up to the task and stitched up that evil sextant dropcloth just right.

At this point is where the bad guys finally catch up with us. A mysterious raspy caller summons a German piano teacher named Gunther with a footballer physique (Carsten Nørgaard) to take up arms in the name of his true calling — Shadow Warriors, 5th Battalion, each bearing the Mark of Reinhessen (or possibly Rheinhessen?) as a proud tattoo, ostensibly as descendants of those sinister Hessians. Gunther and his two henchmen torture and murder Jenny’s bartender friend, then somehow find Corbin’s cabin and stage the kind of shootout for which this wooden cabin is usually designed in most movies. No one gets hurt, but Gunther is captured while the Hessian henchmen absconds with the sextant, which should do them absolutely no good without the map, which they leave behind. Somehow they find the chest inside the sealed fireplace at the Dutch Reformed Church anyway. Either they had their own map, which would be impossible since this was Washington’s own cartographic work, or they were eavesdropping on the earlier exposition, in which case the sextant was superfluous.

Anyway. To the church, then. Inside the chest — which the Hessians refer to as “Item 37” — is this week’s MacGuffin: a grimoire titled The Lesser Key of Solomon. WikiPedia confirms this is a real thing, though they dispute Jenny’s claim that it was written by the King Solomon as a journal for his black magic notes. In the way of bragging rights and all the vocabulary I picked up from Dungeons & Dragons in my youth, I’d like to say in my defense that I plugged “grimoire” into the first sentence in this paragraph before I read it on that particular page. It’s nice to know the writer and I were of one mind on that much.

The Hessians name-check the book’s first section, Ars Goetia, which presumably contains the spell they need. They set up around the Church’s baptismal font and begin summoning demons on behalf of their master, the scary white Big Bad who’s been plaguing Our Heroes all series long. After Gunther kills himself by suicide capsule, Our Heroes catch up and nearly get themselves killed, until they grab the grimoire and toss it into the summoning portal broth, which ruins everything and saves the day.

During all this, Captain Irving has been supervising the boring parts of the police work. He and his men do their part on the crime scene at the bar, then trace one set of fingerprints to Gunther’s house, where they find the basement loaded with evil magic paraphernalia, including several glowy purple skulls.

After the fracas, Jenny has to go back to her cell, but she and Abbie have a fragile, extended heart-to-heart. Jenny finds it cosmically ironic that Abbie, of all people, has seemingly been chosen to be one of the Two Witnesses discusses in Revelations 11 and episode two. A remorseful Abbie agrees to seek limited conservatorship of her sister so that she can go to court and find some legal way to set her free. It may take Abbie months, but she knows that her own silence helped condemn Jenny all those years ago, and she kind of needs to stop turning her back on her. If Jenny escapes before the end of the season anyway, I won’t be surprised.

The biggest revelation this week: before biting into his cyanide capsule, Gunther mutters three last words in German, one of which is, at long last, the name of the anonymous tall white Big Bad:

So our Big Bad finally has a name — Moloch, straight out of Milton’s Paradise Lost, no direct relation to the character from Watchmen.

If you missed a previous episode of Sleepy Hollow, the last few episodes can be watched online at Fox’s official site, or MCC recaps are listed below for handy reference. Enjoy!