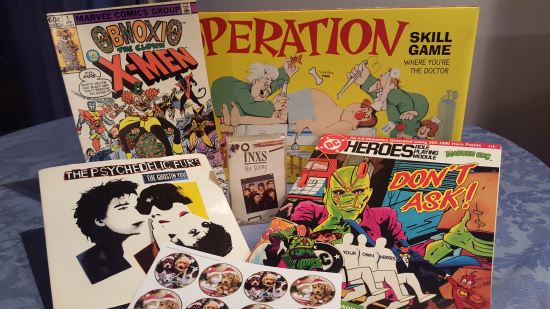 When your humble Midlife Crisis Crossover narrator was a kid, Hickory Farms ruled the gift-set market with their carefully arranged and packaged snack assortments that were perfect for holidays, birthdays, and weddings for couples who forgot to register anywhere. The big HF put presents inside their presents so you could gift while you gift. They’re still in business today, but their marketing is more selective than it used to be in those halcyon shopping days when we could drive to the nearest mall and stock up on summer sausage anytime we felt like it.

In recent years the burgeoning geek-demographic market has taken the idea in a different direction. For those who’d rather buy hodgepodges for themselves and keep them rolling in like clockwork, Loot Crate offers a monthly subscription service that fills fans’ mailboxes with bobbleheads, remaindered toys, unpopular overstock, weird reading matter, and more bobbleheads. Sensing a possible fad in the offing, Wizard World launched its own copycat club called ComicConBox, which does much the same for more than twice the price. If you want your house filled with random knickknacks and characters you’ve never heard of, either service is a fine way to accumulate future Goodwill donations.

I recently exchanged words with a rep at a company called Man Crates, which returns the gift-set idea to its roots as a single-package special event, but expands the paradigm beyond the old meats-and-cheeses domain. Mind you, those are still on the table, in sets with names like “Cow-pocalypse”, “Pit-Master”, and one that sells itself with the one-word name “Bacon” (kinda like “Madonna” or “Thunderlips”). As befitting the name, several Man Crate options focus on other manly-man pursuits such as golfing, grilling, tools, shaving, large dogs, hot sauce, and zombie defense (because YOU NEVER KNOW).

For other not-manly-man folks like me, they have gift sets for gaming, coffee, baby care, and Asian snacks (my son would love this). When thinking of me, the Man Crate rep thought of their nostalgia-riffic “Old School” crate, which teams up classic playthings like Rubik’s Cubes and Pez dispensers with an array of candies as seen in the drive-ins, drugstores, and corner convenience stores of my youth. If you or your loved ones have the means to open an actual wooden crate, they have a Man Crate in mind.

The rep posed a question to me: what would I pack in an “Old School” crate?

That brings us to a little spinoff invention I’d have to call…the MCC Swag Box!

That’s right! For the low, low price of I-dunno-whatever bucks, you or a special someone or the next stranger in your path would receive one of our finest collections carefully curated from the depths of my peculiar childhood. As an added bonus, every shipment would come packaged inside a real board game, because with the exception of Battleship, the inside of every board-game box used to be 80% empty space, so we could fit plenty of stuff inside one of those.

Your fantabulous MCC Swag Box would contain goodies from each of the following categories:

* 30-year-old comics! — I’ve been reading them since at least age 6, so obviously they’re the headliner. Since I didn’t discover comic shops or the direct market until I was 13, your comic will come from one of the companies that ruled our local newsstands — Marvel, DC, Archie, Harvey, Charlton, or the latecomers at Gladstone. If the MCC Swag Box became a raging success, the next step would be a deluxe version that includes books from smaller companies that barely penetrated the mainstream market for brief spans — e.g., Comico, Continuity, NOW, and First Comics. But for the basic MCC Swag Box, there’s about a 40% chance you’ll recognize the star of the comic. Hope you like the Micronauts, Hot Stuff, E-Man, or Dial ‘H’ for Hero.

* 45 singles! — I discovered pop radio circa 1980; from 1983 to 1985 I was hooked on vinyl singles and bought them 3-for-$5 at Camelot Music or National Record Mart. Now you too can know what it was like to experience each artist two songs at a time — one song you’ll know and get sick of after a month, paired with a lesser track that didn’t impress the record execs much. Special surprise: one out of every fifteen singles will be authentically scratched so the first minute is frustratingly unlistenable.

* Reward stickers! — Teachers loved putting stickers on students’ homework for a job well done. Or for a job mostly well-done. Or sometimes just for a job turned in. I was smarter in elementary school than I am today and couldn’t get enough of them. In fourth grade alone I racked up so many dozens of stickers that you could hardly tell what my Trapper Keeper’s original color was. If they faded or lost their stickiness, I waited a day and another new sticker usurped their spot. This method of positive reinforcement ended abruptly when I started junior high school, and I can’t decide whether this sentence should’ve started with “unfortunately” or “fortunately”.

* G.I. Joe figures! — To this day my wife and all my least abnormal friends swear Star Wars action figures were the ultimate four-inch playtime avatars. Sure, I had a couple dozen of them and a Darth Vader carrying case, but when Hasbro relaunched the G.I. Joe line with more points of articulation and later introduced the revolutionary swivel-arm battle grip, Star Wars figures took on second-class status in my closet. When I’m trying to create dioramas, act out narratives on the fly, or just put two figures together in a convincing fight scene, flexibility and poseability were enormous assets in making the Joes look as though they were doing the things I wanted them to do. For my money, Kenner’s Star Wars figures might’ve had colorful alien designs, but they were slightly more movable than those wooden Fisher-Price kids. And it helped that the G.I. Joe cast with their super-hero code-names barely qualified as a military unit, especially later members like the ski-lodge instructor Snow Job and the firefighting Barbecue, who dressed like an orange dance robot.

* Kool-Aid packets! — Yes, we remembered to add something for your kitchen. I think the first recipe I ever made was probably “1 packet Kool-Aid, 1 cup sugar, 1 gallon water”. In some ways Kool-Aid would prove to be my long, loooong-term gateway drug to coffee.

* Audiocassettes! — That’s right: more music! Because eventually I realized two songs weren’t enough for the better artists out there. My first acquisitions were K-Tel Top-100 compilations that exposed me to a wider range of styles and genres than some of our Indianapolis radio stations did, but I soon graduated to entire albums by my favorite artists, which in hindsight were largely New Wave and “alternative” acts. It wasn’t a conscious decision on my part to prefer the tracks that peppered the bottom half of Casey Kasem’s “American Top 40”, but that’s what stuck with me long after I just couldn’t listen to Thriller again for the hundredth time.

* RPG modules! — The talented designers at TSR opened a whole new world of gaming for me and my friends with the invention of Dungeons & Dragons. For years we were hooked on role-playing games, years before video games latched onto the concept and D&D retroactively had to add a “tabletop” modifier to stand out. From there I moved on to the upgraded Advanced Dungeons & Dragons hardcovers, then to other non-fantasy RPGs like Star Frontiers, Top Secret, and the licensed RPGs based on the respective Marvel and DC universes. If you couldn’t make up your own adventures, gaming companies sold “modules” that were prepackaged stories your team could play through under the adversarial leadership of your Dungeon Master, Game Master, or whatever your game called the friend who supervised every gaming session. Personal favorite modules included AD&D’s “Tomb of Horrors” and “Ravenloft”, DC Heroes’ adaptation of Watchmen, and Star Frontiers’ adaptation of 2001: a Space Odyssey that made so much more sense than Stanley Kubrick’s film ever did to me.

* Rubik’s ripoffs! — I had a Rubik’s Cube, but never warmed up to it. I bought one of those quickie how-to-solve-Rubik’s-Cube books, but it looked super boring. One evening my mom got fed up and spent hours on it until she triumphantly matched all colors on all sides. To this day it remains one of the five greatest victories of her life. I, on the other hand, had more fun messing around with the imitators that flooded the market in the wake of Rubik’s success. Here’s one that’s like Rubik’s but a sphere! Here’s one that’s 4x4x4 instead of 3x3x3! Here’s one shaped like a pyramid! Here’s one that’s also a sphere, but instead of rotating cubes it has lines of movable beads shaped like baseball stitching! Here’s a Rubik’s keychain! And so on. Why buy in to the popular fad when you can settle for a sad wannabe?

* Legos! — Well, naturally. In each authentic batch of Legos included in every MCC Swag Box, no two will be the same color, no obvious shapes can be made out of what you’ve got, the instructions will be totally lost, and you’ll injure yourself stepping on on one at least once a week until you pass them and their unholy foot-wound curse on to your younger relatives. Somehow you’ll have fun with them anyway.

This, in conclusion, is why professionals like the folks at Man Crates get to design gift sets and I don’t. Others might find the MCC Swag Box as bewildering as Homer Simpson’s dream car, but I know I would pay me good money for one.

[DISCLAIMER: MCC received no explicit promises of funds, products, or services from Man Crates prior to posting this entry. Some of those Man Crates do sound nifty, and sometimes a suggested writing prompt hooks my imagination at just the right bearing.]