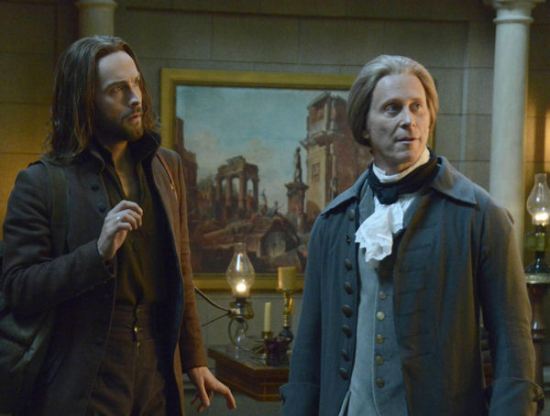 Tonight’s episode has a flashback in which Ichabod Crane acts as Thomas Jefferson’s beta reader for the Declaration of Independence. When you have scenes like that giving Mr. Peabody and Sherman a run for their money, adding funny captions to the proceedings is just gilding the lily, isn’t it?

Previously on Sleepy Hollow: a bitter 17th-century sorcerer tempted Katrina with Dark Side blood magic; the returned Captain Irving acted in cahoots with the fiendish Henry Parrish, who added the Grand Grimoire to his evil book collection; and Our Heroes learned the shocking true story of the Salem Witch Trials that The MAN thought we couldn’t handle.

In tonight’s new episode, “What Lies Beneath”, special guest Steven Weber (Wings, NCIS New Orleans, Studio 60, more more more) brings to life the man, the myth, the legend, the Founding Father, the third President of the United States of America, the one and only Thomas Jefferson. And not just in flashback.

…George Washington wasn’t the only Founding Father who knew of the evil that was afoot in their time, and of the evil that would be afoot in the distant future. Thomas Jefferson, the writer and inventor and later politician, was in on young America’s deep, dark secrets as well. Knowing that someday the two Witnesses foretold in the New Testament would arrive and need all the help they could get, Washington and Jefferson collaborated on a plan. Thus was erected the Fenestella, an underground repository for all their research and knowledge on the forces of darkness, all the resources a future Witness could need to succeed, including the Folio Immaculata, which would somehow contain the names of all the possible mentors who might aid the Witnesses when the time came. Presumably it also contained magical recipes, life hacks, and cheat codes.

Jefferson was, of course, good friends with our man Ichabod Crane, and even accepted his writing suggestions to his definitive work-in-progress, which Crane perceptively approves in its purpose as a sort of bold declaration of the colonists’ independence. Alas, Jefferson would later distance himself from Crane because his magical resources told him Crane would be one of those very Witnesses someday, and that meant they couldn’t remain close to each other because manly reasons. So they drifted apart, though Crane would never know why at the time. (Recounting in the present, Crane’s succinct summation is, “Jefferson unFriended me.”) Even in those days, one guy didn’t just go up to another and ask probing questions about their relationship.

The Fenestella had two other notable features, each made possible by the Sisters of the Radiant Heart, which Jefferson refers to as the “Sacred Heart” as either a scripting slip or line misread or weird foreshadowing: (1) a holographic Thomas Jefferson to mind the place and provide advice and guided tours, equipped with all the thoughts and memories of the real Jefferson, composed of 1% primitive tech and 99% witchcraft; and (2) magical guardians called Reavers, condemned souls who would live in the catacombs surrounding the Fenestella, slay unwanted intruders, hopefully be able to tell which intruders were welcome, and live underground permanently without starving or going insane or becoming a menace to anyone foolish enough to wander into the vicinity.

Surprise: the Founding Fathers made a bad call on that last one. Who knew 2½ centuries of isolating and starving a condemned soul would have negative side effects? Was the problem caused by manufacturers’ defects? Did they not read the instructions properly? Did a spell break somewhere? Or did they assume the Witnesses would return in no more than five years at most?

Fast-forward 250+ years to the present, when the Sleepy Hollow public works department sends down a team of three guys to map the city’s labyrinthine sewers and tunnels as part of urban renewal planning. The team makes the mistake of checking inside a rune-covered hatch that leads below the main tunnel system and, not into the island shelter from Lost, but into a waiting nest of Reavers, who bear no resemblance to the onetime 1980s X-Men foes but do evoke the nasty, feral, homonymous space pirates from Firefly. The team goes missing, the police are called after 24 hours, and an offscreen Captain Reyes calls in Abbie and Crane, interrupting their casual tour of a local battleship that Crane was dampening anyway with his muttering about our “Instant-Gram” culture that prioritizes showoff photography over the simple joy of experiencing an experience. Yep, Crane’s become one of those old guys.

As Ichabbie descend into the tunnels, a tagalong joins them: Pulitzer Prize-winning reporter Calvin Riggs (Sharif Atkins from White Collar), who’s seen action in every dangerous hotspot in every U.S. headline ever, but who has never seen magical berserkers gone cannibal. His brother Daniel (Forensic Files veteran Chris Greene) is among the surveyors trapped down below, and Calvin isn’t leaving without him. Detente is reached and Calvin is permitted along, but it remains to be seen whether he’s a future romantic foil to frustrate the Ichabbie ‘shippers, or if he’s a fourth-estate nuisance like Jack McGee from The Incredible Hulk.

The trio finds the Reavers and discover they’re weak against bright lights. Crane grabs Calvin’s $5000 DSLR camera, and coats its expensive flash bulb with some stoneroot bark powder that just happened to be lying around. According to Mr. MacGyver, back in his day they used stoneroot bark powder to make signal fires burn more brightly. Thus is the camera that costs more than our living room furniture converted into a makeshift flash grenade that scares away the Reavers for a few minutes. Then some come back and there’s a fight scene. Abbie and Crane fight their best, retreat from the battleground, and stumble their way into the no-longer-hidden Fenestella, where the holographic Thomas Jefferson asks them to please state the nature of their Presidential emergency, more or less.

Much jaw-dropping ensues. Meanwhile out in the catacombs, Calvin finds his brother Daniel, the sole surviving surveyor. They climb up onto a high rock shelf without getting killed, and…they just stay put for a while. The Reavers eventually fall asleep in various divots and cubbyholes around the room. Far as we can tell when we rejoin them later, that’s really all that’s happened between them. Somehow the Reavers couldn’t figure out how to climb, or they got bored, or the Riggs brothers were awesome at self-defense but not at actually escaping to the surface on their own. Whatever the case: long, dull, totally offscreen, apparently nonviolent stalemate.

Meanwhile, Holo-Jefferson takes Crane and Abbie on a grand tour of the Fenestella and shows them all the books, maps, encyclopedias, and wall-to-wall stuff that is now theirs for the taking. For some reason, Abbie and Crane see one catch: to them the top priority is to kill all the Reavers. There’s only one way to accomplish this: the Fenestella and all its contents must be destroyed. They have no choice. There is no other way. All their precious Witness intel must be sacrificed and lost forever, thus making the Fenestella’s existence entirely pointless and the first and third Presidents’ joint efforts all for naught. All because someone in the 1770s thought condemned souls made awesome, perpetually rechargeable security guards.

Between you and me, I’m sure we could brainstorm fifty or sixty different ways to stop the Reaver menace once and for all without destroying the Fenestella. But NOPE. NO CHOICE AT ALL. Abbie and Crane, quitters that they are, say so. Thus it is written. Nope, can’t take anything with them. Nope, no fair taking notes or using Crane’s photographic memory or his phone to capture images and create saved files and stuff. Even though the Reavers are asleep and they probably have a good 8-10 hours to do pretty much any archiving or pocket-stuffing they want until wakey-wakey time. Nope nope nope nope nope. There must be EXPLOSIONS. Crane and Holo-Jeff do have time to rekindle their friendship and apologize for poor communication, but that’s it. No hoarding documents allowed, no touching stuff, no asking Holo-Jeffy a zillion useful questions about the trials and tribulations ahead. Period. Dot. Full stop. End of discussion. Say farewell to this weird place and its congenial holo-Prez that might as well never have existed or appeared in an episode in the first place.

Yadda yadda yadda, they all get out, there are EXPLOSIONS, and the good guys win but at a stupid cost. Most importantly, Calvin promises not to write a million-dollar exposé about all the supernatural pandemonium he just witnessed, and he takes the liberty of presumptuously adding himself to Abbie’s email contacts.

Meanwhile in subplot A: an anxious Captain Frank Irving asks the dependable Jenny Mills to help him bust into the evidence room at Sleepy Hollow PD HQ so he can steal back his wedding ring and other personal items that he left behind. Jenny notices weird runes on his arm and realizes something’s wrong with him, thus proving that she’s 1000 times more useful than Katrina’s magic, which detected absolutely nothing wrong with Irving the other week. She waits till they’re in the evidence room to confront him, but he confesses that he’s still enthralled to Henry Parrish, but covered for a limited time by a portable rune he picked up from one of Henry’s books called “Temporary Salvation”, which lets him evade magical soul detectors and disobey Henry briefly so he can steal the Hellfire Club’s confiscated ledger from a while back and use the wire transfer info it contains to make his family rich before he falls back to the Dark Side. Jenny’s kind of lost and lets it slide, while Irving takes off to go party at Western Union.

And in the single-scene subplot B: Katrina dreams that her son Jeremy/Henry is at her side implying a proposed alliance between “our kind”, and then he stabs her in the hand with a thorny rose. She wakes up and — gasp! — her hand is actually bleeding, as if she’d been accosted by Freddy Krueger, world’s angriest FTD florist.

If you missed any previous episodes of Sleepy Hollow, you can see what’s available online at Fox’s official site, or check out MCC’s own ongoing recaps. Visit our season-one recap checklist, or this season’s recaps linked below for handy reference. Enjoy!