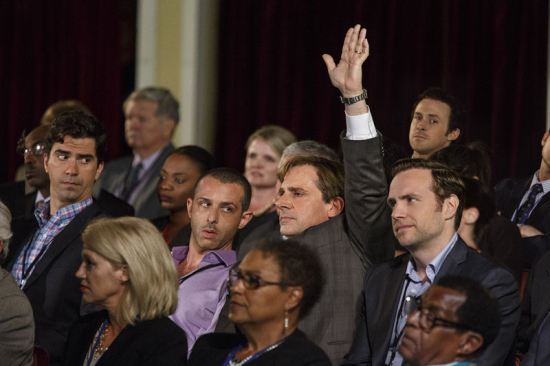 “Hi, yes, I don’t have a question. I’d just like to point out for the record that no one has ever produced a single shred of evidence linking paper companies to the 2008 recession. So SUCK IT, BANKS.”

The first time I saw the name Adam McKay, he was a writer on Saturday Night Live who occasionally appeared in short films that helped kill time during the show’s after-12:30 wasteland. Those never did much for me, but he moved on to helming Will Ferrell comedies that attracted much larger audiences, of which I’ve not been a part. Fourteen years after his SNL stint, he’s now co-written a Marvel super-hero movie (last summer’s not-bad Ant-Man) and directed a Best Picture nominee in The Big Short, which ought to be mandatory viewing as an ethics cautionary tale in all future finance classes ever.