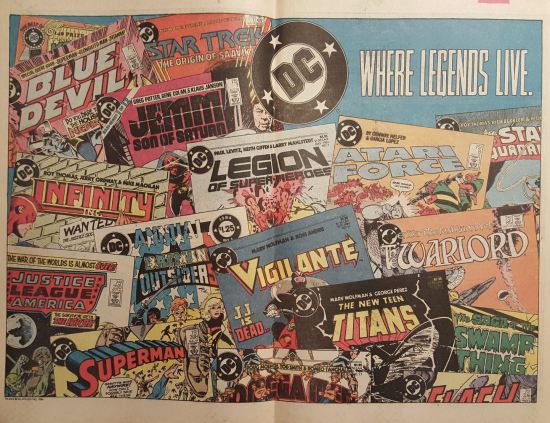 DC Comics house ad from The Flash #339, cover-dated November 1984. A lot of ’80s characters are no longer around, and it’s been decades since fans begged DC to bring back “legends” like these.

We live in an entertainment culture where we take it as given that all the best ideas were conceived before we were born, so trying to forge new universes seems like too much effort. Reboots used to be a desperation move, but anymore they’re the norm for luring in new fans — not just for work-for-hire companies with an intellectual property catalog to keep fertile and growing, but for artists, writers, and filmmakers all too happy to make a lifelong career out of perpetuating the lives and histories of worlds and heroes they didn’t invent themselves. It’s a living.

It’s easy to scoff at reboots when they’re happening to characters that don’t matter to you. If you’re a geek for long enough, though, sooner or later they’ll get to a universe you do care about.

I’ve been there. I remember the first time I had a universe yanked out from under me.

END_OF_DOCUMENT_TOKEN_TO_BE_REPLACED

From the Department of Completely Expected Developments:

This week Disney confirmed they have plans afoot to initiate aesthetic strip-mining and merchandise-driven IP expansion for their latest acquisition, the world-renowned Star Wars universe. We already knew director J.J. Abrams had signed on to captain the ostensible Star Wars Episode VII for release in 2015, but Disney has no moral imperative to stop there. At the very least, we’ve been duly notified of two proposed film spinoffs in the works: one based on Boba Fett, because chicks dig guys who act tough and die quickly; and one based on young Han Solo, which will hopefully be more action-packed and less educational than The Young Indiana Jones Chronicles.

Expect many more theoretical projects to be announced in the days ahead as assorted Hollywood professionals shelve their own original ideas and instead spend all their waking hours competing for a turn at being a cog inside Disney’s newest money-making machine. Odds are the following proposed spinoffs will not be a part of any future PR announcements:

* Star Wars Origins: Ice Cream Maker Guy — If you blinked at the wrong moment during the Bespin sequence in The Empire Strikes Back, you missed the fleeting seconds of screen time that comprised the complete career of Willrow Hood, more affectionately known to sarcastic fans as Ice Cream Maker Guy. Last seen (and only seen) carrying a large white cylinder through the crumbling halls of Cloud City, Hood’s meaningless presence has taken on a life of its own in recent years, with enough apocryphal trivia accumulated to support a Wookieepedia entry several hundred words too long. Every single sentence of that entry will be tossed out in favor of an origin story written from scratch. The ideal actor for this role, in my flexible mind: Community‘s Danny Pudi. (It does not have to be Donald Glover. Don’t be racist.)