The view of Mount Everts from Mammoth Hot Springs.

It all comes down to this, our final hour in Yellowstone. Nine hours after leaving Cody 180 miles ago, I was so done with driving. The entire day had confirmed our hypothesis that, yes, Yellowstone is big. Like, really really really really really big. I tried my best to care deeply about the remaining flora, fauna, geological peculiarities, and man-made obtrusions that stood between us and the park’s north entrance, which in turn would lead to respite at the next hotel and check a new state off our lifetime to-do list.

The final set of springs in our path was Mammoth Hot Springs, differently formed from the others as a series of terraces composed from travertine, a kind of limestone heavy on the calcite. The roadway first took us up to the Upper Terraces, covered in tourists gallivanting around the paths and the roadway itself, which made for some awkward creeping in the car. That circled back around to the Lower Terraces, which were a good deal less scenic except perhaps to Tim Burton fans and consequently were much less populated.

Upper Terrace travertine to the south of us. 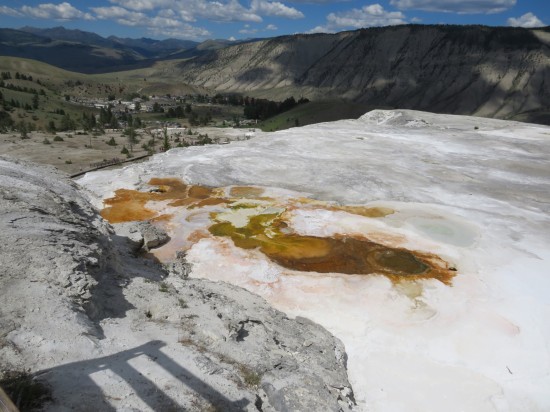 One last puddle of thermophiles punctuating the travertine with a flashy orange splotch.

Due north of the springs: the town of Mammoth, Wyoming, with less than 300 residents. 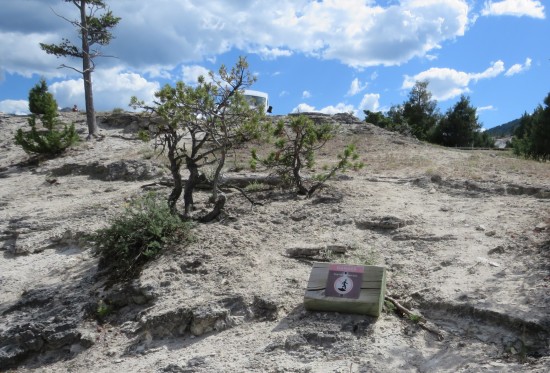 “Keep Off Thermal Area” says the sign for anyone who thinks the “Hot” in “Hot Springs” is just kidding. 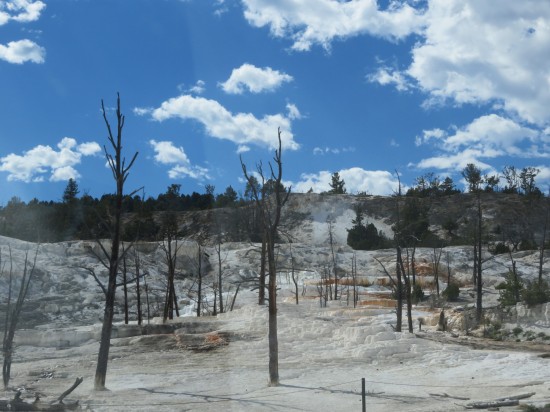 Much of the Lower Terraces looked like this, like a music-video film set for an early-’90s post-modern rock band.

Cozying up to stone textures by the roadside. 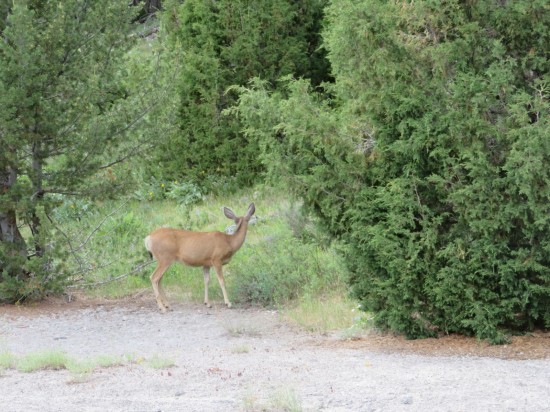 A stray deer hanging out between terraces.

Away from the terraces and back on the road, this was our final glorious panorama taken while inside the park boundaries.

Traffic slowed to a crawl as we approached Mammoth and natural formations gave way to parking lots, buildings, and this random pillar. 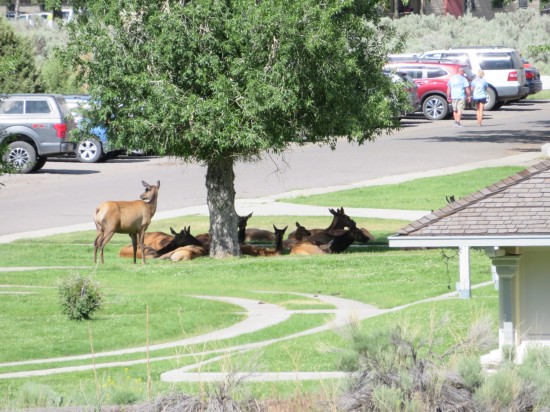 Buildings, schmildings: wildlife are gonna lounge wherever they want.

The biggest buck we saw on our entire vacation, just chillin’ in the shade.

The Gardner River burbles along, parallel to the highway.

At last we crossed the border from Wyoming into Montana, a few miles before the park’s own edge. Standing proudly at Yellowstone’s north entrance is Roosevelt Arch, nearly fifty feet high and constructed from basalt. President Theodore Roosevelt himself laid one cornerstone in 1903, but never returned to see the final product in person. As park entrances go, it’s certainly bolder than the ordinary booths that had greeted us at the east entrance. 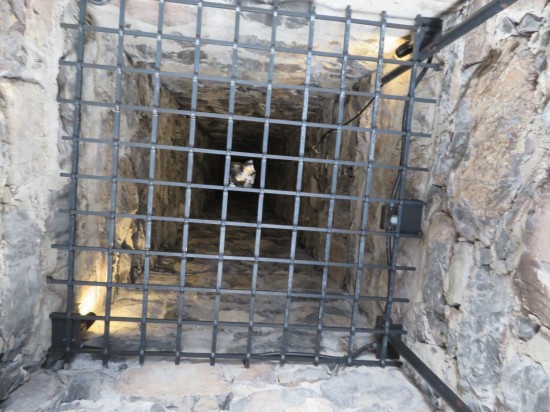 As you pass under the arch, look up and you’ll see this curious vent. 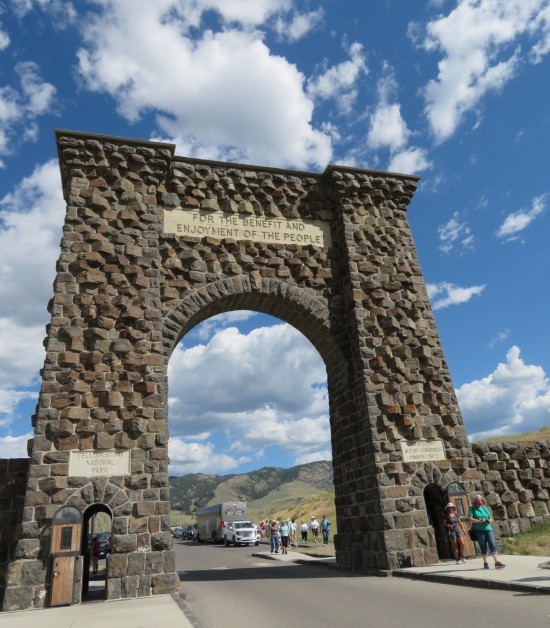 Visitors who enter the park from the north are treated to the arch’s more photogenic side.

On the other side of the arch lay the tourist-trap town of Gardiner, where we’d be spending the night in preparation for our first big day in the state of Montana. Our next 24 hours would take us to still more panoramas, a national monument, a state park, supply-chain issues, a potentially near-death experience, and still not a single live bear anywhere in sight, which in retrospect is for the best considering we hadn’t bothered to stock up on bear repellent.