For standard heroes, yellow is not a good look…

Some Hollywood adaptations go through the motions of the full original story, typically regarded as a boon for new viewers unfamiliar with the original. Some of your more challenging renditions assume everyone knows the original text backwards and forwards, thus giving the filmmakers leeway to invert, subvert, satirize, or otherwise frame it through a cracked lens from an askew angle. With the visually majestic misadventure of The Green Knight, writer/director David Lowery (whose riff on Disney’s Pete’s Dragon was straightforward and exceeded every expectation) opts for the latter treatment and avoids the easy way out, the road taken by far too many King Arthur flops. The tale of Sir Gawain and his verdant nemesis recently came up in the BOOM! Studios series Once and Future, which benefited me as an advance refresher. Other viewers who came into it cold might have questions and argue about it with the driver the entire way home. Which is fine! Arguing about cinema is much more fun offline than on-.

As it goes in this version: once upon a time there was a young man named Gawain (Dev Patel from Slumdog Millionaire) who got to attend meetings among a team of knights who sat at a table that was more like a big horseshoe than a round shape. Their team name is never revealed and their identities are shrouded in mystery. Gawain wasn’t a proper knight himself, but he was the nephew of the king (Sean Harris, two-time Mission Impossible villain) so no one complained about nepotism or even really acted like they noticed Gawain. He aspires to matter one day, but at first he doesn’t.

Gawain’s chance to stand out comes as the Knights are meeting on Christmas morning, which seems a bit inconsiderate to their families, when into their castle walks an armored Groot with a giant battleaxe. Calling himself the Green Knight (Ralph Ineson, the dad from The Witch), this magical wooden intruder dares them all into a “Christmas game”: one of them may take a swing at him if they’re feeling up to it, but the catch is, next Christmas he gets to take a swing back at them. The king’s oddly calm reactions imply this is all normal and has happened before. All those older knights hem and haw and no one steps forward — surely not because they’re chicken, but maybe because they have tenure.

Gawain hasn’t been around for one of these Christmas tough-guy games before and decides, fine, whatever, let’s do this. He thinks he’s found a loophole in the rules and straight-up decapitates the Green Knight — a single, cleaving lucky shot with a borrowed sword. Because this sap-filled busybody can’t hit back if he can never hit again, right? Now Gawain can enjoy the rest of his Christmas, unwrap some tacky medieval neckties, and hang out with his girlfriend (Ex Machina‘s Alicia Vikander) and they can all live happily ever after until some inferior director decides there should be a sequel that sends Gawain to go find the Holy Grail or sword-fight a twelve-foot Attila the Hun. The End.

O, what a fool Gawain is! The Green Knight yet lives. ‘Twas merely a flesh wound. The emperor of the Fighting Trees of Oz grabs his head and rides off Sleepy Hollow style, and they have a date for a return whack next Christmas. Gawain has one year to prepare in whatever way he sees fit. In a lesser film about a greater hero, a training montage would ensue. But rather than the Gawain we might hope for, we follow the Gawain we deserve: he displays no sense of preparation or anticipation and could write a memoir called My Worrywart Year. And yet this literal one-hit wonder is treated as a big hero by the public at large, who appear to support an entire Gawain merchandising fad that includes paintings, puppet shows, and probably some Saxony Chinatown knockoff action figures. 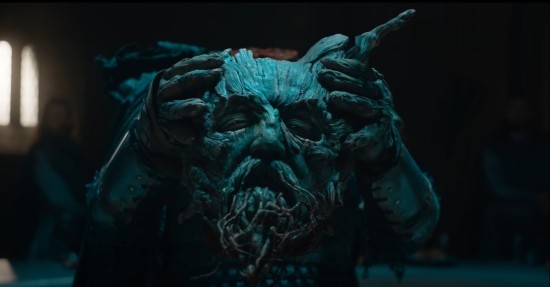 This nonetheless intriguing nominee for the John McClane Technically Christmas Movie Hall of Fame reveals its true calling once the next holiday season approaches and Gawain must fulfill his end of the deal. Whereas their first duel was a home game, the rematch is an away game, scheduled at the Green Knight’s faraway forest cathedral. Thus Gawain must embark on the Hero’s Journey, which might be edifying for him if he were a hero. His deconstructed reality is he’s an ancestor of Dante Hicks from Clerks, but instead of crying, “I’m not even supposed to be here today!” his catchphrase is “I’m not a knight!” Such is Gawain’s recurring response to the knighthood others mistake in him. Perhaps he should’ve thought of that before he stepped to Lord Treebeard.

To his credit, he doesn’t spend the remaining runtime fleeing and hiding from fate. As he rides, strides, stumbles, and shambles through a most unmerry olde England swathed in revealing shadows and infrequently pierced by leaked lights gone astray, he fixes upon one beacon in his mind: the ideal of honor — the haughty code that says there are certain ways a knight should be and act and save the day. That ideal leads him on like a distant Dulcinea, unquestioningly and unthinkingly and at times wobbly in his not-so-rigorous interpretation of it. “I can’t define honor, but I know it when I see it,” we infer from his screw-ups.

When a kindness is offered to him, he learns to regret overestimating his own repayment. When a maiden beseeches him for the kind of favor only the hardy could grant, his first impulse is to ask what’s in it for him. When a pair of suspiciously perfect nobles lay down a few terms and conditions in the sort of stilted verbiage that would arouse skepticism in even the most naive fairy-tale ragamuffin…this Gawain is a throwback to the classic Looney Tunes image of a giant lollipop with “SUCKER” written across the wrapper. And don’t even ask about his fighting prowess. Just don’t.

Other outlandish sights come and go as Gawain painstakingly does as he believes he must, treating his quest as inexorable while he unconsciously works through the Five Stages in advance of his looming doom. Alternately steadfast and rattled and sometimes both at once, Dev Patel is stubbornly, stylishly us if we were compelled to do heroism without proper training. Those old sagas and epics made adventuring look easy. These beautifully practical sets, grounded in reality yet visually heightened into an otherworldly canvas, are like a grand vacation getaway in which we as main characters would spend too much time taking photos if only cameras had been invented. We’d vow to keep one eye fixed on our destination while the untold dangers lurk on the side of our other eye we’ve kept shut. In our heads we would be swept along by a classic Jerry Goldsmith orchestra, but the truth is our parade of mistakes would be better suited to the eerie, discordant score by Daniel Hart (composer for all of the director’s films to date), a melange of misleading comfort strings rent asunder by stretches of jolting noise-rock squalls.

Before we’re clued in to just how few experience points Gawain actually has earned to date, The Green Knight deceptively resembles those old-fashioned films where the plot was simply Our Heroes running a gamut of imaginative creatures and hoodlums and oddities, like The Neverending Story or Labyrinth or 1917, but this one’s on a smaller budget, definitely not for kids, and undercuts its leading man’s shaky attempts either to lead or to be manly. But that’s the point: when we’re tempted to leap into a course of action with potentially dire consequences, it’s good to pause, think it through, and reflect on whether it’s a smart idea to do a thing just Because That’s How Things Have Always Been Done, or its distant bad-take cousin, A Man’s Gotta Do What a Man’s Gotta Do.

In hindsight I should’ve been angrier at one point when a narrative trick is borrowed from a particularly annoying Nicolas Cage film, but I saw it coming and prepared myself, arguably better than Gawain did for his own endeavor. Otherwise I was enchanted and engrossed by this done-in-one installment of “How Sir Gawain and the Green Knight by Anonymous Should Have Ended”.

Hey, look, it’s that one actor!: At the King’s side, his equally unnamed queen is Kate Dickie, the mom from The Witch (who shares no winking exchanges with her old friend Ineson behind his very convincing Walking Whomping Willow getup). Also unnamed is Gawain’s mom, played by Sarita Choudhury (Jessica Jones season 3) as a wielder of witchcraft with an agenda known only to her.

Momentary strangers in Gawain’s path include Joel Edgerton as a seemingly generous benefactor; Erin Kellyman (Falcon and the Winter Soldier) as a specific Welsh character whose vignette makes more sense if you’re already familiar; and Barry Keoghan (one of the Dunkirk pasty guys) as a peasant who gives directions but not exactly freely.

How about those end credits? To answer the burning question that MCC is always happy to verify: yes, there is indeed a scene after The Green Knight end credits. For those who tuned out prematurely and really want to know..

[…insert space for courtesy spoiler alert in case anyone needs to abandon ship, even though I can sum it up without spoiling much of anything…]

…a tiny girl crawls across the castle floor, picks up the king’s discarded crown, and tries it on for size. If he isn’t going to wear it, someone ought to.