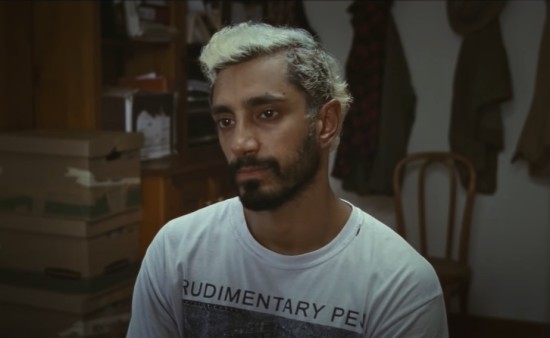 I honestly thought all the band T-shirts in this film were fake till they brought out one with Einstürzende Neubauten. Them I recognize.

It’s that time again! Longtime MCC readers know this time of year is my annual Oscar Quest, during which I venture out to see all Academy Award nominees for Best Picture, regardless of whether I think I’ll like them or not, whether their politics and beliefs agree with mine or not, whether they’re good or bad for me, and whether or not my friends and family have ever heard of them. I’ve seen every Best Picture nominee from 1988 to the present, many of which were worth the hunt. The eight nominees for Best Picture of the Pandemic Year may pose more of a viewing challenge…

Of all the Best Picture nominees I hadn’t seen prior to nominations, Sound of Metal was among the 2020 films I’d been most eagerly anticipating even if AMPAS had snubbed it. I was denied the chance to see it in its exclusive Amazon Prime cage, as one of maybe six Americans who refuse to subscribe out of a sense of monopoly subsidy fatigue. (There’s also my personal rule that I never, ever pay monthly or annual fees for shopping perks, which is equally confounding to Amazon and Barnes & Noble.) As is the annual Oscars season tradition, post-nom Metal was re-released to exactly one (1) local theater, in case any non-subscribers wanted to catch up mid-pandemic. My son and I lucked into a Monday night showing entirely to ourselves without paying AMC a $100-$200 private screening fee. Chalk up another win to my non-patented four-step H.I.D.E. method for pandemic theater survival.

The ironies compounded as we went. I was anxious to immerse myself in a theatrical speaker setting to experience the unparalleled sound design of a simulated world of encroaching deafness. And just as we were alone in the theater, so did Our Hero grow increasingly alone in his own world — sometimes though not always through no fault of his own.

The frequently riveting Riz Ahmed (The Night Of, Nightcrawler) is Ruben Stone, a ferocious drummer in an avant-garde noise-punk duo with his longtime singer-guitarist girlfriend Lou (Olivia Cooke from Ready Player One). They bonded in rehab four years ago, found each other and a certain grace in music, and have been on the road ever since, keeping each other alive and straight-edge and putting their fractured pasts well behind them. Then over the short course of a few gigs, fate plays a jarring, jagged riff through their nomadic peace when Ruben’s hearing tunes out. At first it’s like a low, piercing Emergency Broadcast System tone. Then it’s intermittent drops like a Wi-Fi signal conking out during streaming playback. Suddenly in the middle of a performance, something in his head throws a switch and the world goes on Mute, stranding him in aural nothingness save a rumbling murk of farthest frequencies.

Understandably he freaks out. As a musician, sound is his life. As a former addict, sound is his salvation, his anti-drug. As a romantic, professional, and artistic partner, sound is their bond, their biz, their tapestry, their heart. When it feels like your very core has been pruned, what do you do? How do you go on?

Fact is, and point is, you do go on, even if “on” defies your frantic attempts to imagine it. When Ruben shows even the slightest hint of falling back on a nasty habit to get by — a single bummed cigarette — Lou can see streets ahead where that gateway to the old days could lead. She calls a guy who knows a place — a deaf community that also has its own addiction support group. Ruben’s rehab experience taught him sometimes a retreat of sorts is necessary, so the narrative convenience of a dual-proficiency setting means writer/director Darius Marder and co-writer Derek Cianfrance don’t have to waste the first 90 minutes on Ruben refusing to get help and dragging Metal out into a three-hour odyssey.

Though the idea of giving up yet another stretch of life on an extended stay absolutely sucks, he’s level-headed enough to (eventually) accept he can’t do it himself. The worst part is he’ll have to go in alone — no plus-ones allowed, not even ones who mean everything. Ruben and Lou are a great, interlocked couple. Watching their separation is heartbreaking. It isn’t the last time Metal hurts to watch.

A tentative, jittery Ruben receives his initial interview, welcome, and ground-rules lay-down from the community head, a pony-tailed elder named Joe (fellow Oscar nominee Paul Raci, once the forgotten third employee of Parks & Rec‘s Animal Control department). Joe eases him in with voice-to-text conversations before throwing him into the mix, letting him meet the gang and watch their silent, smiling, everyday interplay. Laughter and bonhomie and joyful ASL exchanges surround him at the dinner table, alienating at first and yet slowly opening him up to the possibility that maybe, just maybe, life could find a way. But first he has to pay attention and ride along.

Not that it’s easy for him, by any means. There’s frustration. Screaming. Throwing stuff. A poor, defenseless donut is violently squashed, which would’ve set me off if it hadn’t been a cake donut, so I allowed it. He’s embarrassed to visit a classroom of kids who function perfectly well within their paradigm. He hangs off grumpily to the side because he hasn’t even begun learning the alphabet. He hates the feeling of starting over, like he’s being sent back to school as if he somehow flunked out of life itself. Ruben wants to go back to doing things his way and he wants to do them now. The hard reset is not an easy task.

Slowly he acclimatizes. Over the course of indeterminate months he learns. He makes friends. He tattoos. He shows off his drumming, which generates the pleasant sensation of vibrations that his new peers love. The humming and thrumming and pounding and pulsing are at times a release and a massage of sorts. Metal switches on and off between sound and un-sound, alternating between Ruben’s new world and his old one, between noises that mean nothing and silences that mean everything. Joe nudges Ruben here and there as needed within his very firm set of rules. Joe is a gentle soul, for the most part content with where things play out, but he’s firm and unyielding when he has to be. He’s an authority figure who’s worked with hundreds, possibly thousands of folks. He knows what works and what doesn’t. In an ordinary film, a character in his position would either have an arbitrary mean streak or a mushy side that capitulates to some studio exec’s demand for a happy ending at the expense of, and with cheap disdain for, any sort of “rules”. Joe is not that cardboard figurehead.

And yet, the last half of the film is not a congenially uplifting victory dance. Though Ruben commits to his new role with a certain humility, off the clock he entertains thoughts of a tantalizing Dulcinea: the 21st-century marvel of cochlear implants. Through this astounding technological wizardry, the deaf can hear, music comes alive, birds harmonize all around, and the world is a 4K stereo cinema in your head. Or so Ruben seems to think as he ponders what he sees as his only two options: learn to live deaf like countless people before him have, or maybe scrape together tens of thousands of dollars, buy this super awesome miracle cure, get his old life back, make everyone happy, save the day, win the film and conquer deafness like it’s an evil cancer.

If only. Ruben’s limited, surreptitious internet access means he didn’t get to research cochlear implants as much as he should’ve. If only he’d get what Joe is trying to show him, that deafness isn’t a conflict to settle, a villain to defeat, a hurdle to leap over and leave behind in the dust. The film title takes on a new dimension as he weighs his options and picks a direction under the assumption that those around him — or in Lou’s case, those who aren’t around him — will be so proud and thrilled for him. His thinking process is virtually like his band’s sound, all feedback squalls and aggressive drumbeats, in a situation where perhaps a little more stillness would do him more good.

I can’t pretend I know where Ruben is. Teenage years of extreme headphone usage have, decades later, made it tough sometimes to track conversations whenever I’m in a small party or any larger crowd (back in the Before Times when those were a thing), and I turn on closed-captioning for nearly everything I watch to ensure I’m not missing anything, but my hearing has never been near that same level. We’ll see how my senior citizen years go, should the Lord will it that I make it to those. I have a sister-in-law who’s a licensed deaf interpreter that I’m fully prepared to Zoom-chat with for advice should my ears head that direction. That said, this is the first time I’ve ever seen a theater showing an open-captioned film. The effect was appreciated and yet occasionally distracting. Often the subtitles would catch a missed nuance for me. Other times, it would spoil upcoming sound effects and soften my sense of anticipation by telling me what I should sense. I’m okay with that at home; away from home, somehow I had my own miniature Ruben moments.

My self-impositions aside, Metal was every bit the eye-opening experience I had hoped, but I hadn’t prepared for the tragedy at the heart of it, as Ruben and Joe have to settle accounts, and as Ruben makes his way back to Lou, who hasn’t exactly been hovering in place all those months. Ruben imagines coming out the other side to thunderous applause, but his stubborn insistence on doing things his own way might just lead to little more than the sound of his own hand clapping.

Hey, look, it’s that one actor!: Matthieu Amalric (Quantum of Solace, The Grand Budapest Hotel) is Lou’s estranged dad, who lives in Paris and whose late-game conversations with Ruben reveal a forgotten rivalry and some begrudging gratitude. Lauren Ridloff (Walking Dead, Marvel’s long-delayed Eternals) is among the community teaching staff gently showing Ruben through the portal into a new mode, if only he’ll follow through.

How about those end credits? No, there’s no scene after the Sound of Metal end credits, but they reveal another Marder in the cast (presumably this is a close and personal tale for our director), and Ahmed himself nabs an executive producer credit, which is keen.