Anne proudly remembering to grab herself a validation sticker after failing to on the first go-around.

Previously on Midlife Crisis Crossover: pandemic. Pandemic! PANDEMIC! How much longer, we all wonder? When will we as a planet — or at least as a country, or really just statewide would be nice — reach that quixotic goal of “herd immunity”? When can we go back to wandering within 2-3 feet of each other and resume absentmindedly taking everyday life for granted again? For us, Easter weekend represented another stepping stone toward that goal.

When last we left our family, the vaccines were on their way to our respective age groups. In early March, my wife Anne went in for her Pfizer shot. One quick prick, fifteen minutes of waiting to be ambushed by adversity, then she was off and running. Several hours later some shoulder soreness and a headache tried to tag-team her. A pair of Tylenol summarily dispelled both.

Two days after that entry, Indiana’s age bracket was finally lowered enough to reach me, sort of a youngster compared to Anne by their arbitrary standards. What a difference our seventeen-month age gap made. The day after St. Patrick’s Day, which once again passed without meaning, it was my turn. My experience Xeroxed Anne’s. I parked at the same medical center. The line moved efficiently and without a hitch. I barely felt the pinprick in my shoulder. I took so long to fumble my way through a selfie — not a natural impulse for me — that my mandatory fifteen-minute wait took twenty before I finally headed home without incident. My shoulder hurt the next day, and I nearly had a headache, but it never quite graduated to full-on pain. End of side effects. That was a relief.

The general public’s anecdotal reviews of the second shot worried us a bit more. Shot #2 is the one everybody dreads, even our most ardently pro-vax citizens. My mom and Anne’s grandma each had no trouble after their respective second shots. Maybe we’d be okay, but nobody’s claimed any of the vaccines are 100% effective, bulletproof, magical, or guaranteed free of discomfort.

By the stroke of a divine pen, Anne’s second shot was scheduled for Good Friday. So many potential metaphors, so little time.

This time I drove her to the appointment in case of sudden onset disaster. We arrived twenty minutes early. I waited in the car while she ventured inside. Fifteen minutes later Facebook all too happy pushed a notification in my face for the selfie seen above, which she posted from the waiting room. I took that as a positive sign.

The following day, her arm hurt. The day after, Easter morning, she suddenly felt really sleepy while working on her usual puzzles in the Sunday paper and laid down for about five minutes. Otherwise, she’s fine.

Next Saturday’s my turn for #2. I’ve taken the following Monday off work to allow time for the worst. The best-case scenario is I end up with more time to catch up on my Oscars viewing without moaning a lot or chewing ibuprofen like candy. 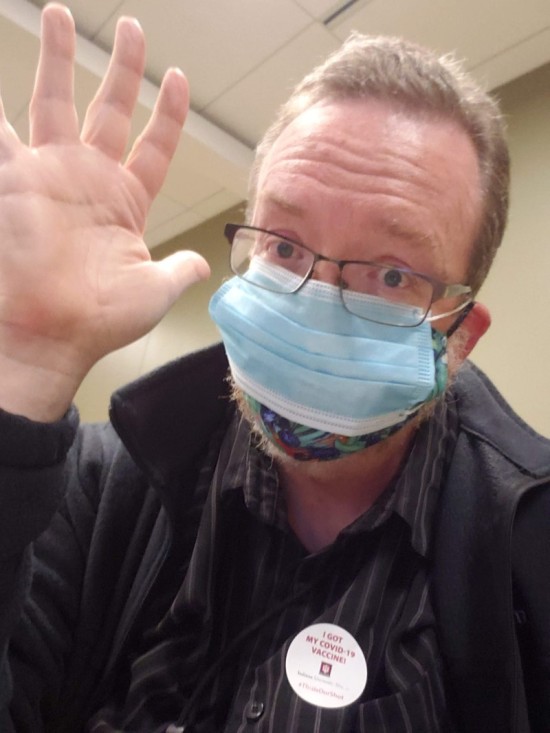 After my first shot, this selfie took EIGHT TRIES. This is why I don’t get to be a paid influencer.

Anne has twelve days to go before her two-week window passes and her immune system is at full efficacy. Assuming I’m needled on schedule, I’m looking at reaching her level on April 24th, the day before the Oscars telecast. Meanwhile on a separate schedule for the next generation down, my son’s first shot is coming up this Tuesday. Maybe this year we can do something a little more awesome for my birthday in May than last year’s imaginary couch-potato comic-con.

None of this happened in time to save Easter this year, though. Anne and I kept our weekly appointment for Sunday morning online service, viewing safely from home while fellow congregants who’ve probably forgotten us were welcomed and congratulated in person before our lead pastor preached a lesson from Luke 24 in observance of our second annual virtual Easter. As with last year, it wasn’t the best Easter ever. We found ways to enjoy this day the Lord had made anyway. Among other accomplishments, Anne bought my adult son a chocolate bunny and triumphantly finished her Sunday puzzles without my help.

And now I spend the rest of the week pacing back and forth waiting for my turn for one more stab, and then my own fourteen-day countdown begins. That’s nineteen days total until we theoretically reach the end of the thirteen-month tunnel of darkness and, Lord willing, can rejoin the outside world with a lot less dread and a lot more hope. I’ll also need thoughts and prayers that I can find the wisdom to mind my tongue around anyone on my mental list of People Whose Attitudes and Behaviors Made the Pandemic One Thousand Times Worse Than It Needed to Be. Trust me, there is a list.

Admittedly it doesn’t help that the media keeps sending us mixed messages. The core announcement in 36-point boldface across the saner channels is generally “Get vaccinated if you want to live!” We’re absolutely on board with that, but that encouragement keeps getting drowned out by skittish commentators who trust science and yet don’t trust science. It’s hard to maintain enthusiasm when we’re also being told, “Stay in hiding in case the vaccines are useless against…all-new all-different SUPER-COVIDS!” and “Keep on keeping away from other humans in case the entire point of vaccines halting transmissibility turns out to be a worldwide lie!” and “Don’t forget, it’s only 96% effective, so pretend you’re not actually vaccinated in case you’re secretly in the 4%!” And so on. Anchorpeople nationwide won’t stop assuring us with straight faces, “Failure is totally an option.”

Worrying reminders keep flying at us from other directions, too. A local restaurant we visited five months ago was shut down today after nine employees tested positive. In the same morning’s news came an AP article about Americans excited to wait their turn for their vaccines, only to have COVID catch up and kill them before they could reach that blessed moment. And the other day our prematurely eager city’s NCAA March Madness hosting gig soured after complications from coronavirus exposure killed an attending fan.

The pandemic isn’t over. The finish line is closer than ever. But it’s still in the distance for the unvaccinated in our family, for the partially vaccinated like me, and for the nearly full-strength recipients like Anne, eyeing that calendar and patiently waiting for the shot to do its acclaimed job.

After that…then how shall we live?

Nervously for a good while, I’m sure. But if we’re really, truly meant to trust science, and if we’ve every reason to believe — based on the side effects so far and our own medical histories — that our immune system responses will be average and successful, then sooner or later these tiny new residents squatting in our bloodstreams will need some field testing. Sooner or later someone will need to demonstrate the vaccines were worth it and encourage the skeptics from their hidey-holes.

Sooner or later we’d really love to emerge from the veritable tomb that was 2020’s existential misery, a thirteen-month psychological catatonia that probably amounts at most to a three-day blink in the Lord’s eye, and rise up into new life. It might work even better if folks don’t keep trying to knock us down and shove us into a completely different kind of tomb.