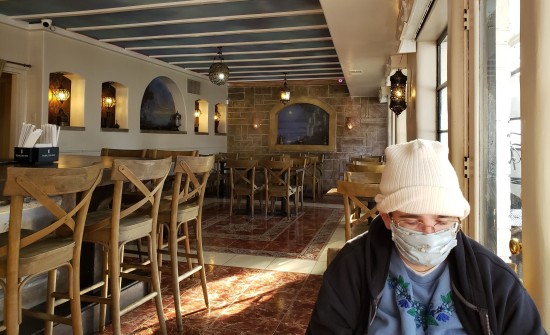 The lovely lady and stalwart companion peruses the menu in a dining room section we nearly have all to ourselves.

Previously on Midlife Crisis Crossover: over the past several months my wife Anne and I have made infrequent outings to local restaurants using the guidelines I set forth in my previous listicle about how we do pandemic dining without getting killed or killing others. The TL;DR version:

Last Sunday morning we stepped out of the house again. In a way, we had cause for celebration. That phrase hasn’t come up for us often during the COVID-19 pandemic. 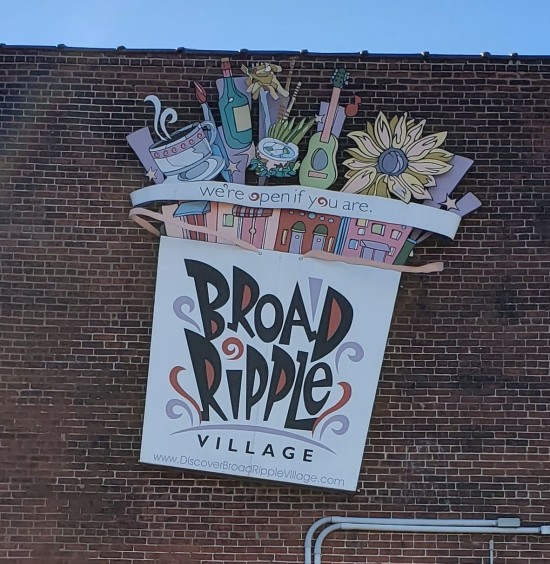 Our destination welcomes us.

We drove out to the village of Broad Ripple, once known as one of Indianapolis’ trendiest neighborhoods. Every large city with a beating heart has at least one like it, an area that attracts all the affluent youngsters’ favorite boutiques, record shops, concert venues, happenin’ restaurants, stylish bars, and art collectives. It’s far from all interstates and consequently an “Are we there yet?” kind of long drive from all other sides of town. Its secluded geography contributed to its past status as a culturally upscale Petri dish.

I used to attend college in the area, but never made it a full-on stomping ground. I trek out there once every couple years to see my favorite alt-rock bands live after they’ve gotten old and less popular. It’s been a few years since the last time I read any articles about Broad Ripple’s rising crime rate. Presumably that statistic’s driving perpetrators went on sabbatical during the pandemic. 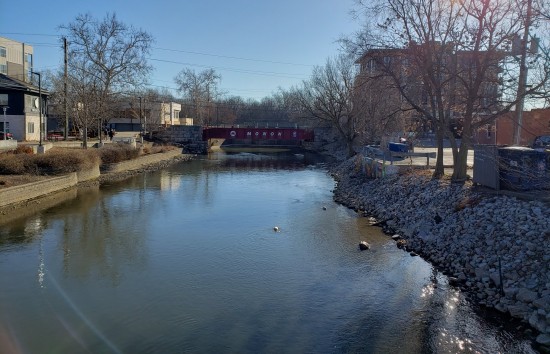 The White River cuts through Broad Ripple. as does the Monon Trail — at 27 miles, Indiana’s longest cross-county walking path.

In the weeks leading up to this occasion, our home state kicked off the long-awaited coronavirus vaccination process. First they came for the super elderly, but I said nothing because we’ve all seen the rampant stories about disproportionate deaths among our eldest elders and nursing home residents. The former included Anne’s grandma, the sweetest woman in world history, who deserved every tenth of a milliliter. She’s over 90, feeling fine, and recently begun welcoming guests into her home who can no longer unwittingly damage her no matter how many COVID-19 aerosols or crackpot theories they carry inside.

Then they came for the first responders, which was absolutely fine, and then the pretty elderly, but I said nothing because that age group included my mom, who’s now had both her Pfizer shots with nary a side effect beyond slight shoulder discomfort.

It was around this point that Anne and I felt a strange sensation overtaking us. Side effects included smiling, lightness in our steps, avidly looking forward to future events, and tentative vacation planning. It took a while for us to realize that sensation was hope.

The vaccines were real. They were coming to our state, even to our very city. Lord willing, we might survive to see the After Times. 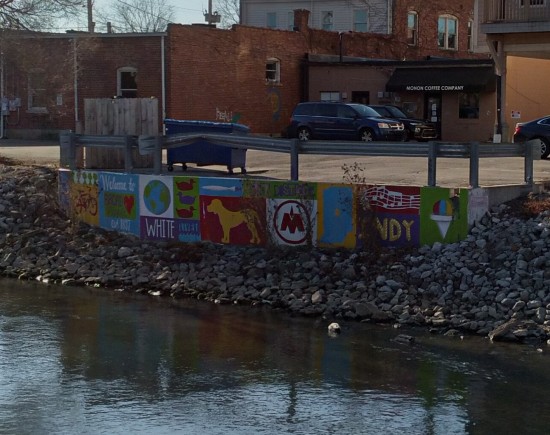 Broad Ripple has art installations everywhere. A full survey of it wasn’t our primary objective on this trip. Next time, maybe.

Then they came for the baseline elderly and the near-elderly, and I wished aloud that they’d hurry a bit and would it help if I went to the end of the vaccination lines and began shoving the herds forward to their impending immunity. Meanwhile in other states where guidelines vary wildly by local fiat, a few Facebook friends younger than me posted pics of their special vaccination moments and mementos. And their side effects, when applicable. I’m aware of at least one WordPress blogger who had a lousy experience with her first shot, but far less so with round two.

As of tonight, current stats for my Facebook friends: 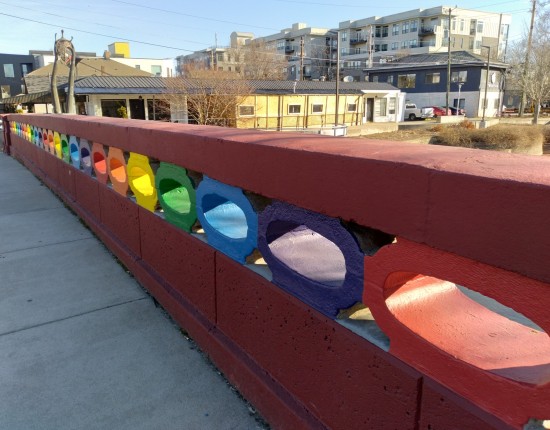 If this stretch of Guilford Avenue isn’t called the Rainbow Bridge, then they don’t deserve a bridge.

Then they came for older middle-aged folks, and I wondered if the makeup team from The Irishman could make a house call and hook a whiny fat guy up with a clever disguise, even an unconvincing one. Alas, even if I could afford their prices and travel fare, Hollywood goop is useless against Indiana’s deeply bureaucratic vaccination registration process. Patients must call or click first; no walk-ins allowed, especially not by guys poorly cosplaying as Chris Evans at the end of Avengers: Endgame. 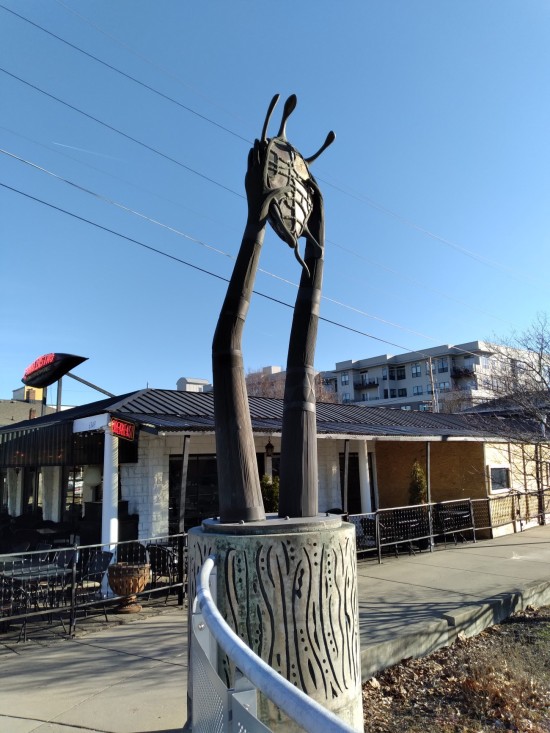 A 2002 sculpture by David Jemerson Young called “Grasping Turtle”. In this metaphor I’m the turtle, the Indiana Department of Health is the pair of long arms holding me up, and the ground is where the fully vaccinated get to walk and frolic freely.

Then the Thursday before, they lowered the bar multiple times — twice in 24 hours, in fact — and came for all Indiana residents age 50 and up. 50 was Anne’s magic number. And only Anne’s. She’s slightly older than me. In 2021 “slightly” counts in horseshoes, hand grenades, and vaccination permissions.

She scheduled her appointment for the following Wednesday. Hope was pinned on her calendar.

Anticipation of that encouraging critical step buoyed us as we went for brunch at Canal Bistro, a Mediterranean restaurant owned and operated by a husband-and-wife team from Egypt and Lebanon respectively. The staff were gregarious, welcoming, helpful, and a dozen other positively endearing qualities that ensured we’ll need to see them again someday to sample other mealtimes.

Canal Bistro itself. Broad Ripple parking is not my favorite, but it’s thankfully a non-issue on Sunday mornings.

Three days after this wonderful repast, Anne went in for her Pfizer shot. I’m told the line was speedy and the attendants brought their A-game. One quick prick, fifteen minutes of waiting to be ambushed by adversity, then she was off and running. Several hours later some shoulder soreness and a headache tried to tag-team her. A pair of Tylenol summarily dispelled both. 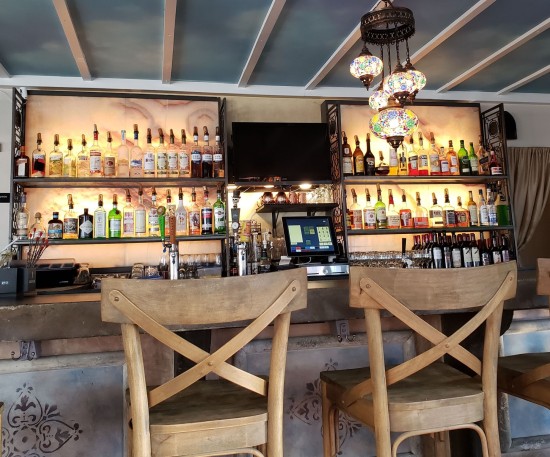 Alcohol isn’t our thing, but if you’ve been missing this kind of scene since March of last year, here’s a gentle reminder of good times past and great times ahead for you.

Apropos of everything, her second shot is scheduled for Good Friday. If any of the frequently reported, much more serious second-shot side effects occur, Easter weekend may not the best ever. Then again, neither was 2020’s. Either way it’ll definitely be too soon for in-person church service. But by the time tax season ends, the world will be her oyster. 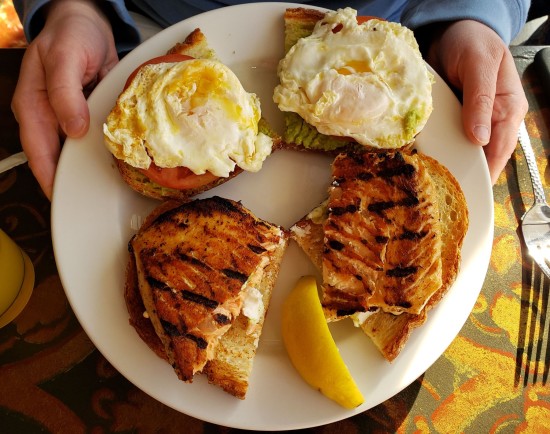 Anne’s brunch choice: a grilled salmon and egg sandwich with goat cheese, tomato and avocado. Better seasoned than any salmon either of us has had in years.

Hours later on that same Wednesday, after weeks of public outcry and probably a looming threat of 2021 Federal Royal Decree #706 to badger governors on the subject, they came for teachers and school support staff. Our niece joined their ranks last year, so that was awesome news. Not long after that update, they also brainstormed a medium-sized list of comorbidities and allowed those folks into the lines, regardless of age. Likewise understandable, with utmost sympathies and congratulations to them on their triage victory.

…and that’s where Indiana presently stands on vaccine permissions.

As of tonight “48 and obese and annoyingly jittery” is not on the list and for vaccination purposes legally counts as “young and healthy”. 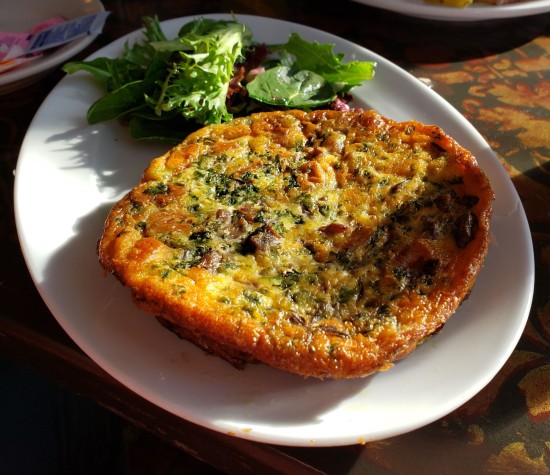 As for me: lamb frittata with rosemary, sauteed onions, parsley and breakfast potatoes baked inside. I wouldn’t have minded a bit more salt, but hated to ask for more favors beyond the graciousness they were already extending to us.

I’m sincerely, exceedingly happy for Anne, and for all our relatives, coworkers, friends, and nearest strangers who’ve moved that much closer toward putting 2020 behind them forever. Multiple sources, including Anne’s own doctor, have expressed their optimistic faith that Indiana will lower that bar yet again soon, assuming The Powers That Be don’t nominate eight or ten other demographics deemed worthy of a Fast-Pass to those medical blessings.