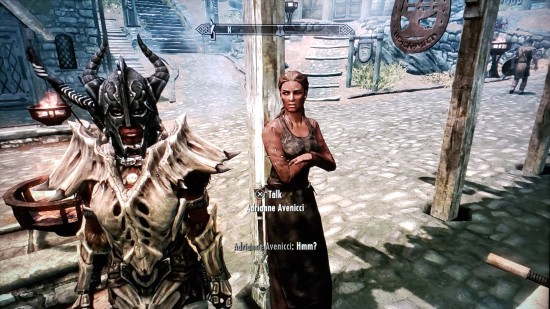 Yep, that’s me in the dragon plate armor I forged myself, hanging out with my favorite blacksmith, voiced by Claudia Christian.

Previously on Midlife Crisis Crossover, at the beginning of 2016:

As a kid, I frequented video arcades regularly. As a parent, my son and I spent a good decade playing games together on his various systems. When he graduated and moved away to college, he took all his systems with him, leaving me with only my old Nintendo that won’t play cartridges unless you keep the Game Genie firmly inserted, and an Atari Plug-‘n’-Play Controller I got for Christmas a few years ago that interested me for about two weeks. On Black Friday 2014, I decided I wanted back in the 21st century gaming mode and picked up a used PS3.

Naturally I started off a generation behind the rest of the civilized world, but I didn’t care. After fifteen months without, holding a controller felt abnormal and rusty for the first few weeks. Once I got used to it again and figured out how to disable the “Digital Clear Motion Plus” feature on my TV, I could shake the dust off my trigger fingers, choose the games I wanted to play, sprint or meander through them at whatever pace I saw fit, and try some different universes beyond Final Fantasy and our other longtime mainstays…

…and it’s been a minor MCC annual tradition ever since. In an average year I would play three times per week, maybe two hours per session, and get through four to six games. Except for that time I spent thirteen months on Borderlands 2. Or that other time when when I spent nine months of 2019 on Borderlands: The Pre-Sequel. Perhaps my definition of “average year” is stretching a bit.

And then there was 2020. Without conventions, family gatherings, friendly outings, work-related events, holidays, out-of-state vacations, or restaurants I could enjoy without terror or paranoia, I had a lot more time on my hands for hobbies. Especially this hobby, as it turned out.

The following is a rundown of my retro gaming in that unforgettably accursed year, in the order played and with my trophy percentages included to reinforce the fact that I’m neither a gaming wizard nor a helpless grandpa:

* Dead Space (final trophy count 58%): 9/29/2019 – 2/7/2020. I vaguely remember my experience from the Before Times, when COVID-19 was an up-‘n’-coming travail in select parts of the world, not yet in our backyard, and the most inconvenient part of everyday life was a horror-SF game in which I wasn’t allowed to shoot space monsters squarely in their bodies but instead was required to aim at their scrrawny, flailing tentacles, and had absolutely no reason to invest in any other weapons except the starter gun because it was the best weapon in the entire game. I don’t have much to add to the five paragraphs I wrote last year except to confirm I completed the main storyline, will concede the nasty shocks were sufficiently surprising, appreciated the designers trying to do Something Different, yet felt wholly uncompelled to play through the same scary movie again for missed trophies.

A game where I can sit down at smorgasbords uninvited? I’m in!

* Skyrim (trophy count 47% so far): Valentine’s week – present. Fantasy is not an automatic go-to genre for me, but I do have at least fourteen Final Fantasy experiences under my belt, at least ten of which I saw all the way through to the end. (A tiny part of me remains morbidly curious to know where FFX-2 would’ve gone. A very tiny part.) But the world of Skyrim comes up so often in everyday internet life that it felt remiss to avoid it. At long last I get all those jokes and memes about an interchangeable guard whose adventuring career was ended by an arrow in the knee, like a pro football player who was crushed under the wrong dog-pile and had to go into restaurant management instead.

To be sure, there was a learning curve. I wasn’t used to the concept of dynamically generated quests, in which a video game has hundreds of activities in store, but throws some of them at you in randomized order, holds back a handful that you’ll never actually see, and essentially gives every player a different chronological experience. My initial, aborted try with Red Dead: Redemption gave me a taste of that, and I hated their version of it. Maybe next time I pick it up I’ll forgive them. In Skyrim I got used to it and let the FOMO go. The hand-to-hand combat system is still clunky, the leveling system is alternately engaging and tedious depending on my mood, and the wealth of storytelling is staggering — multiple storylines that can take weeks or more to resolve, quests that can consume a diversionary day or two, or even the singular setting of a house whose stationary wreckage is a series of clues to reconstruct the narrative of a one-act play. Every location has a tale with a beginning, a middle, and an end, but they don’t always happen back-to-back.

And there are so, so many locations to see, and creative tasks to take up, and humdrum fetch-quests to endure, and dungeons I haven’t raided, and NPCs I’ve yet to meet, and more more more. Which is why I’m nowhere near done yet. Or rather, my character isn’t near done yet. 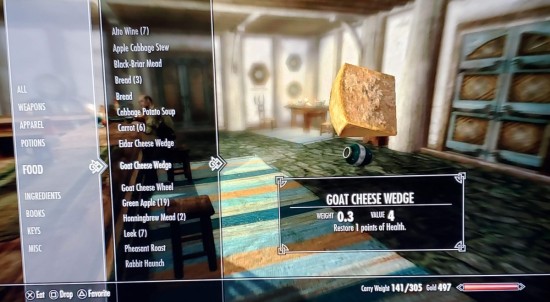 The day I found out I could also buy goat cheese in Skyrim was truly a milestone.

In the time-honored tradition of players naming their video-game heroes after random characters from elsewhere in pop culture, her name is Ramonda. She’s a Redguard who’s generally tried to be the knight in shining armor wherever possible, but ever since that night she had to go undercover at a party in the Thalmor Embassy, she’s been rattled, second-guessing herself, and not always staying on the up-and-up. In the early days you’d think she was a schoolkid collecting “Good Job!” certificates. She joined the heroic Companions, but cooled off a bit when she learned their Inner Circle is a clan of werewolves. She enrolled in the College at Winterhold to become a wizard, only to rise through the ranks at hyperspeed and become their Archmage, which means she’s now Dean Ramonda, which makes me wonder if their school is truly accredited, especially since real wizard schools don’t usually let their students wear heavy armor or carry big swords. As a palate-cleanser afterward she joined the Bards’ College at Solitude on a lark (among the cutest questlines) and was admitted, but not instantly promoted or asked to record a duet with Pitbull.

WHY WOULD YOU SELL THIS AS FOOD. I didn’t protest when the Dark Brotherhood gave me an excuse to take out this monster.

Then the Thieves Guild came a-knockin’. She was hesitant at first because Stealing Is Bad, but by this time her skills had leveled up so greatly that she’s rarely caught, she rarely suffers consequences, she has enough money to buy her way out of the most embarrassing situations, and/or she can simply pull rank and clear her own charges since she’s also a Thane (read: beloved citizen) in every Hold except Windhelm. In Skyrim, thievery for the powerful is a snap. Rising through the ranks was likewise a cinch, so she’s now the Thieves Guild Master in addition to being Winterhold’s Archmage. So far neither position requires much from her. Both places seem to run on autopilot, which is a good thing now that she’s fallen in with the Dark Brotherhood, a league of assassins who are like a rash of ghouls, but whose tasks make murder as easy as thievery. That’s disturbing, but that’s where Ramonda is right now. Once that’s done and she’s presumably promoted to Dark Brotherhood Biggest Brother, shes thinking about going back to the Companions and rediscovering what it means to be a hero, if they’ll have her. Which they will, because none of these concurrent questlines seem to affect each other overmuch.

The rest of the continent would certainly appreciate it if she’d seek redemption and get her groove back, considering the main questline is only two-thirds done. The evil dragon Alduin is still alive, still resurrecting dragons, and still killing and ruining quality of life and whatnot. Ramonda captured a fellow dragon who’s offered to take her to Alduin’s HQ and save the day once and for all, but she’s on a break from that for now. And don’t even get her started on the Civil War between the Empire and the Stormcloak Rebellion, mostly because she hasn’t started on it yet. She’s pretty sure she knows whether she’ll pick the side of the current benevolent queen or the side led by Ulfric Stormcloak, the guy who straight-up butchered the last king and walked away. Ramonda is saving him for last. Oh, my, yes.

Somewhere in between all those adventures, maybe she’ll make time to get married. She keeps putting that off. Right now while she’s in grimdark mode may not be the best time.

Did I mention all the books lying around Skyrim? Such as this one about the myth of Where Music Comes From. About which: yuck.

An excerpt from millions of Age of Coronavirus diaries, blogs, and Facebook threads.

Some random stats and figures as of January 28, 2021, culled from the ridiculous number of things this game tracks:

…okay, some of those aren’t stats or figures. I have no idea which of those stats are normal and which are subpar.

Also, brief pause here to acknowledge the frequently breathtaking scenery, even at PS3 graphics levels from several years ago, as captured on my old flatscreen TV via amateurish photos: 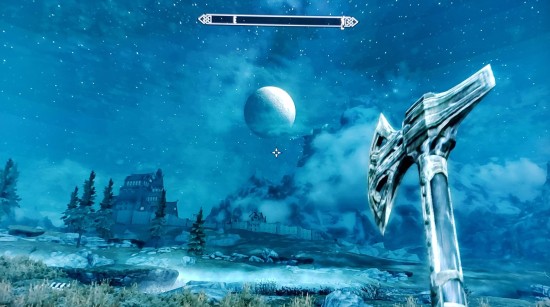 Walking east at night toward Whiterun with an Epic Elven Warhammer.

An aurora shimmering over some of the Dwemer ruins.

The capital city of Solitude. This is currently my wallpaper at work.

That time we brought the Eye of Magnus into the College at Winterhold and it wouldn’t stop rotating or pulsating.

…and that’s how I’ve spent 431 hours of my life so far since Valentine’s Day 2020. Very nice of Sony to add an extra field that tracks your total playtime for accountability purposes.

But with a lot of activities and other parts of life on hold or taken away in 2020, something had to fill the voids. Sometimes Skyrim also took away from other void-filling activities. Often when I wasn’t here on MCC writing and posting and self-entertaining at night, I was hanging out in Skyrim. My writing suffers while I’m half-asleep or depressed by a world that’s crumbling all around me, but I can totally wander Skyrim half-asleep and button-mash through its crappy fight system or turn off my brain while forging another two dozen Dwarven Bows with Absorb Health enchantments just for the experience points. On a related note, I am Skyrim’s premier supplier of Dwarven Bows with Absorb Health enchantments, having made enough to sell to all five of Peter Jackson’s Tolkien’s armies.

And in Skyrim, I can still catch disease, but they’re guaranteed not to kill me or my loved ones. 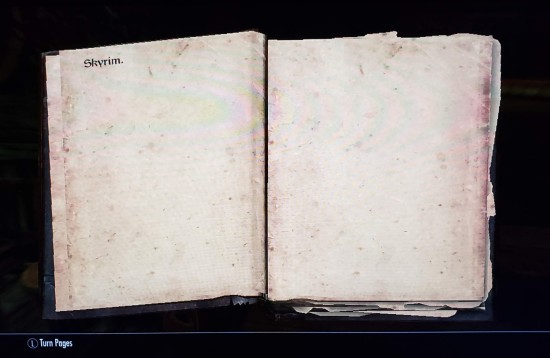