A rare sighting of a movie poster in its deserted natural habitat.

Yes, we are going to stubborn lengths to avoid subscribing to HBO Max. Thanks for asking!

Our family gambled that virtually no one else in the universe would celebrate Martin Luther King Day by going out that evening to see Wonder Woman 1984 at the theater. Once again implementing my non-patented four-step H.I.D.E. method, we waited until the Monday after its fourth weekend and nearly had an entire large auditorium to ourselves except for one couple in the back row and a family of seven clustered two rows behind us — mom, dad, and five kids, with no masks on the youngest three. We all stiffened in our seats when we heard one of them start coughing moments after the film began. So far they haven’t killed us.

I can only imagine what those kids thought about sitting through a 2½-hour movie with precisely four (4) action sequences, lots and lots and lots of talking, and a helter-skelter apocalypse straight out of DC Comics’ preposterous Silver Age.

For those who haven’t already read up on it or joined the HBO Max-o’-millions: over sixty years have passed since World War I, but Gal Gadot’s Princess Diana still really, really misses that ace pilot she once fought with for a few days. In 1984 the Themiscyran warrior spends her downtime pining for sacrificial hero Steve Trevor while she’s working for the Smithsonian in DC across a broad spectrum of sciences that were doubtlessly standard curricula back home. No one in HR has looked at her file and noticed that she’s long past retirement age, probably because she gets along so well with everyone, even the grody male coworkers she routinely rebuffs. Her newest friend is fellow college triple-major Dr. Barbara Minerva (Kristen Wiig), a bookish klutz who wears glasses and therefore by Hollywood standards is an unattractive loser who will die alone and unloved unless she can stumble into superpowers like a hundred other villains who’ve known her pain and her origin. It takes a good while to find her own pathway into their overpopulated ranks, which includes both characters from older superhero films and today’s real-world internet trolls.

One day at the office, Diana and Barbara come across a strange artifact that’s like some rich kid nailed their art-class assignment to sculpt a replica of the Touchstone Pictures logo by jamming Jurassic Park amber crystals into a squash ball. Within moments the mysterious geode reveals it’s more like a genie trapped in a Pet Rock, and suddenly wishes are granted, often with consequences. One test subject gets a free coffee, but later he probably realizes to his horror it was a decaf loaded with six packets of Truvia. Barbara wishes she could be Gal Gadot and presto! But in exchange she and Gal Gadot can no longer be friends and must fight and fight and fight, which is fine by her because she saw that “Imagine” video. Also on a totally unrelated note, Chris Pine, the third-highest councilman in the Parliament of Chrises, returns from the first film and is noticeably not decomposing.

The Fairy Godmineral inevitably comes to the attention of Maxwell Lord (Pedro Pascal desperately chucking his Mandalorian helmet), a Latino narcissistic millionaire self-help TV guru and failed real estate mogul whose birth name was Donaldo Trumpandez. He only wants what he thinks he deserves, which is of course anything he wants. Like any good con man, he needs his marks to believe he’s on their side, so it’s in his best interest for them to have everything they desire and have him to thank for it. Soon Diana and Steve are the only ones standing between the swindler and the stone. Meanwhile in the shadows, Barbara reinvents herself as the Cheetah, lurking and growling and bitter about the rule that every comic-book sequel must have two villains no matter how little they have in common and how inevitably the film really only has room enough for one of them. 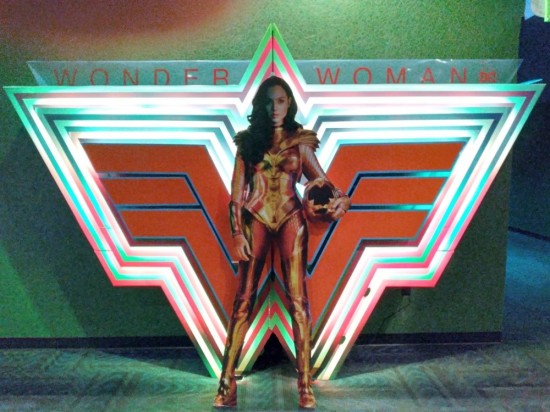 Along the way, kids and geeks who love Wonder Woman merchandise, and who can sit patiently in their seats for 210 minutes straight, can learn a few morals here, including but not limited to:

As Princess Diana tries to show us, America claims to love the ’80s, but it sure has forgotten its lessons. I can’t fault the educational intentions, though WW84 (World War #84?) creates an awfully wide berth for those teachable moments, plus some standard time-displacement movie-sized sitcom gags we’ve largely seen before. (Bonus points if you can name-check examples besides Back to the Future — like, say, the underrated Kate and Leopold.) Time is made for all that by drastically scaling back the super-heroics, which you’d think would be the point of a superhero film. After an extended flashback prologue starring Wonder Tween in the Themiscyran Olympics (basically a backdoor pilot for a series I would cheerfully watch), Gadot takes over as Diana and is granted no more than four action scenes. In order:

Remember being wowed by the No Man’s Land sequence in the first one? #3 is a keeper, but nothing else here compares. There’s a separate climax with Maxwell Lord, but no punching, kicking, jumping, or physical labor required. All around the two opponents is chaos, but it’s a Ghostbusters kind of chaos with car crashes and fluttering papers and extras running in random directions while their worlds ostensibly collide and collapse in largely conceptual, unseen ways. Pascal screams to the heavens with all his scenery-chewing might while a wobbly Diana tells the world what must be done in true unity to save the day together as a planet, besides recycling more and watching less reality TV.

Do not call her Steve Trevor’s trophy girlfriend.

I was looking forward to supporting a second Wonder Woman film and sharing some high praise, and yet I’m left with the same underwhelmed feeling I took away from Captain Marvel. When she’s not replaced by a cartoon avatar, Kristen Wiig is perfectly fine to watch as always, though I already knew she could excel in drama. (Exhibit A: The Skeleton Twins with Barry‘s Bill Hader.) Chris Pine also steps forward to deliver the best speech at a key moment, among the few sincerely emotional highlights. For every scene of beauty such as Diana learning to fly like Christopher Reeve (though a man has to tell her how), there’s another cornball concoction like WW’s classic invisible jet. It’s also hard to pay compliments once you realize you’re watching a reboot of It’s a Wonderful Life in which the angel Clarence has lost his mind and started granting kooky wishes for everyone, not just George Bailey.

Lots of little annoyances kept adding to the bigger ones, such as one scene in which Our Heroes exit the National Air and Space Museum and find themselves directly on a fully functional airstrip lined with fueled-up vintage planes. This may be the opposite end of the same National Air and Space Museum we saw in Transformers: Revenge of the Fallen, which happened to be next door to a desert. Truly our nation’s capital is a land of contrasts.

(I haven’t even mentioned one highly criticized plot device that might or might not qualify as sexual assault in your stricter metahuman courts. I trust that’s a dead horse that’s taken enough beatings for now.)

And I never could get past the central conceit of the Dreamstone, an artifact of zero backstory despite three credited screenwriters (including DC superfan Geoff Johns and director Patty Jenkins herself) whose exaggerated shenanigans wouldn’t have been out of place in Silver Age DC Comics. That isn’t a compliment. Outlandish plot mechanics plus heavy-handed moralizing equals what if Robert Kanigher had written superhero comics into the mid-80s.

Before we caught this for ourselves, I hadn’t run across anyone anywhere who likes WW84 better than the first one. It’s fun in spots, at least akin to lower-tier MCU fare, but it’s hard to take seriously when it can’t follow through on its own promises or morals. All those warnings about considering the consequences of our sins are ultimately erased by an impossibly tidy happy ending where all those consequences didn’t matter after all. Well, except for Diana, who’s left sad again, and probably ready to go grimdark for her destiny in a retooled Justice League that threatens to be nearly twice as long as this was. Oh, Merciful Minerva.

Hey, look, it’s that one actor!: Other old friends from the first film include Robin Wright, Connie Nielsen, and Lilly Aspell (Wonder Tween!), who all vanish after the prologue. A few others cameo in photos, but…well, it has been over sixty years.

And then there’s the coda…

How about those end credits? To answer the burning question that MCC is always happy to verify: yes, there is indeed a scene during the Wonder Woman 1984 end credits. Everyone else online has already gushed over it, and understandably so. After Diana honors a predecessor named Asteria by wearing her golden Alex Ross Kingdom Come armor into the final battle with Cheetah, Asteria herself shows up in the end credits to catch a falling pole at a bazaar, save a few lives, graciously smile and carry on. The actress playing Diana’s predecessor was last seen in a few episodes of Supergirl as the President of the United States, which isn’t a hint to her identity per se, because deep down inside, we all knew she’d be invited to Gal Gadot’s party sooner or later.