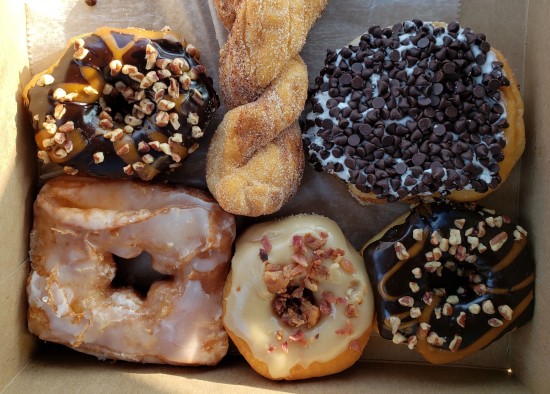 Can YOU name your favorite flavors seen here? Good, because I forgot to write them down.

Restaurant photos are naturally a frequent part of our travel experiences. However, one practical benefit of using your own home as your road-trip command base is you don’t have to eat out for every meal every day. A few times on this vacation, we settled for ordinary home-cooked breakfasts that let us unwind for a few extra minutes before takeoff to faraway towns. On three vacation mornings this year we incorporated early pit stops into our itinerary because sometimes we do need a change of pace from our groceries. This was especially true during the Age of Coronavirus, which may have been an ideal setting for the sedentary homebody in me but has been nonstop frustrating for the lover of new experiences.

Or at least relatively new. Donuts don’t exactly qualify as rare exotica. But this trilogy of breakfast mini-galleries isn’t all about donuts.

On our way south to Oolitic and Mitchell we cut through the middle of the town of Martinsville and pulled over for Knead the Dough Bakery, a pastry oasis opened in July 2017 in the shell of a former pharmacy. We have family in Martinsville who have somehow never revealed this magical place to us. They owe us an explanation.

Yes, those are their wares in our lead photo. 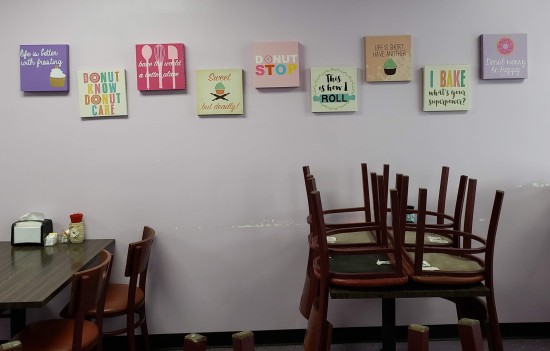 Charming signs above mostly forbidden tables. Such is 2020.

A burning question demands a response above the obligatory donut display.

Whether purple bunnies or purple ribbons, these label do proclaim goodness.

Before we sped north toward Peru and Kokomo, we couldn’t help braking in Carmel because that’s where over half of central Indiana’s upscale restaurants sequester themselves from all the other, lesser sides of Indianapolis, such as ours. They’re the Eagleton to our Pawnee, but unlike Eagleton they’ve yet to go bankrupt. From time to time we’ll sneak across their border, pose as affluent busybodies, sample their wares, and flee before they ask for copies of our servants’ tax forms as proof of our residency.

Anyway, our target in Carmel was Caffe Buondi, one of several restaurants surrounding Carmel’s own Market District grocery. Buondi was opened by a pair of Italian chefs trying to bring balance to the fast-food franchises that someone let squat on the same block. 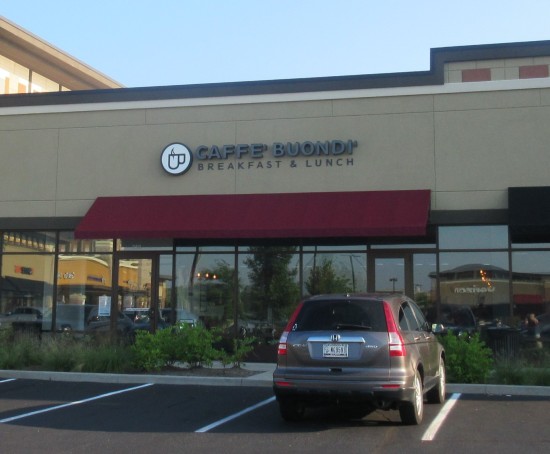 I realize strip malls don’t make for the most inspiring establishing shots. That’s the Indiana restaurant biz for you.

Decor and ambiance: wall plants and mural and so forth. 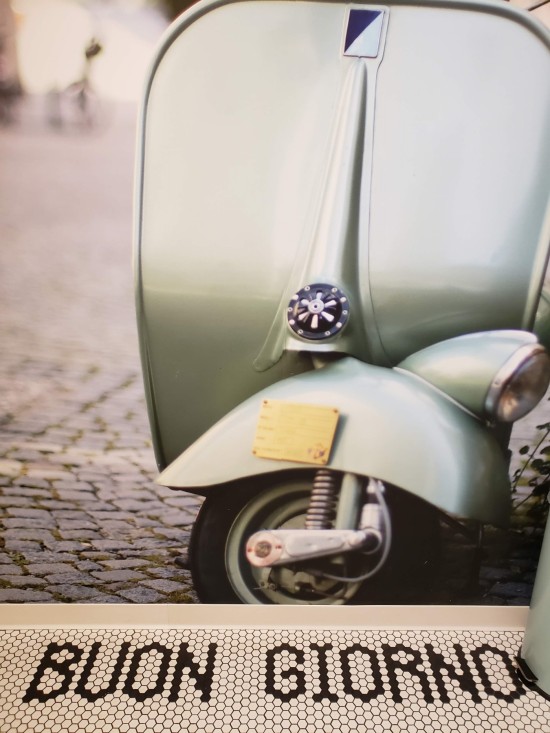 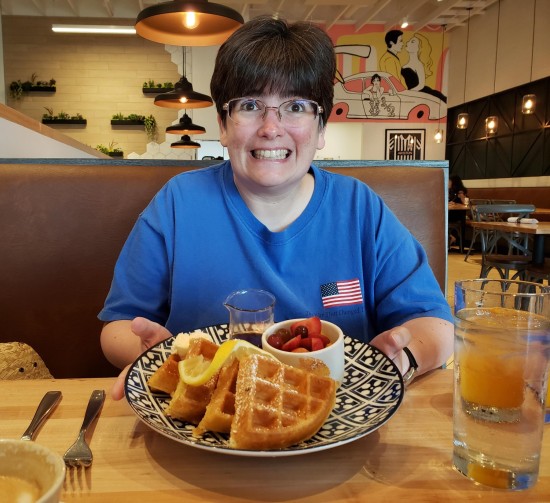 No mere waffles, those. Anne is enjoying their lemon mascarpone waffles. Adjectival ingredients make all the difference.

Each of their Frittatas all’Uovo (a phrase which here means “made of eggs”) have a woman’s name. My choice, the Anna (see what I did there?), contained smoked salmon, caramelized onions, leeks and mascarpone. Served with roasted potatoes and a croissant. I can never have enough croissants. We’re not allowed to have croissants on the west side.

Friday it was once again time to buy the donuts. This time we wandered as far as Castleton, which is a skeet’s shoot from Carmel but not quite as far north. Here there be Doughnuts & Dragons, which newly opened October 15th of last year, which means their first birthday is coming up. They’re among the very, very, very, very very few businesses I first learned of on Twitter and immediately followed. It was shortly after they began opening their social media accounts and months before the doors would open for real. Eventually I had to try them in person rather than settle for salivating over their photos.

It’s not just a catchy name: beyond the donuts, they stock a wide selection of board games for customers to borrow while they snack and enjoy amongst themselves. Well, at least they did before COVID-19 weaponized touching things. They also serve craft beers, for those among you who do enjoy your spirits. 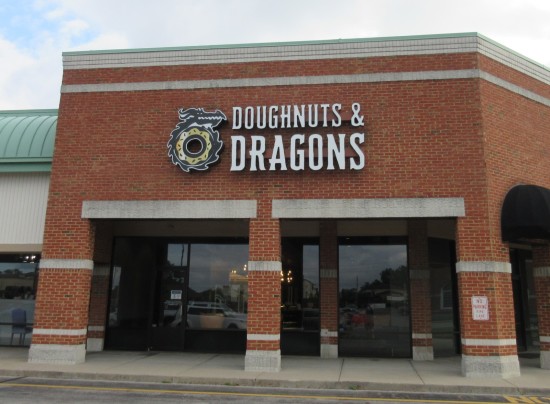 Formerly the home of a BD’s Mongolian Grill.

Yes, we have a donut display! Duh!

Bonus points for cleverness in their table-distancing methods. 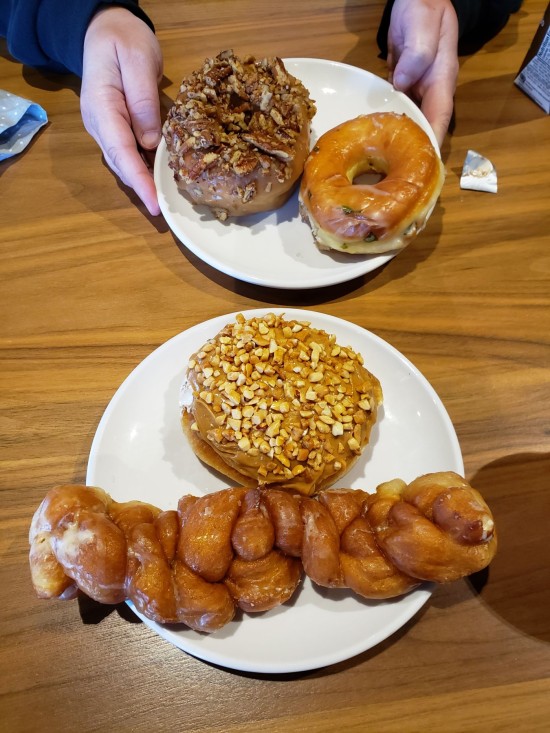 Decisions made: Anne went with one maple pecan and one lemon basil glazed, while I tried one fluffernutter and a simple yet quality coffee braid. Winners, all.

Hopeful postscript: as of this writing, all three establishments have so far survived the harshest business climate we’ve endured in years. May their fortunes and foodstuffs persevere until our next visits.