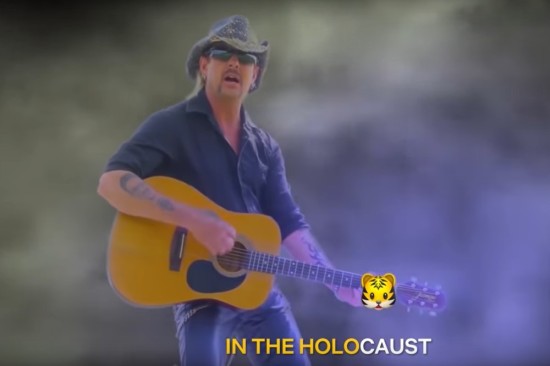 I’m sorry, I just…I can’t with this anymore.

When Tiger King: Mayhem, Murder and Madness first began popping up on the Netflix app’s main screen, between the title and the creepy orange rendering of Joe Exotic’s mugshot, I thought it was a new Asian martial-arts drama. Not that I’m opposed to those, but Wu Assassins is still at the front of that section in my queue. I ignored the image, I didn’t watch the trailer, and I certainly didn’t add it to My List. I figured it would fade into oblivion like 90% of their poorly promoted original fare.

Viewed on a device larger than my phone, now I can see all the tigers.

Then came the social media jokes. And the memes. And more memes. And they wouldn’t stop. Within minutes Tiger King references began infiltrating our lives in little ways that frightened and confused us. We didn’t get any of them. It was exhausting to be the lone holdouts in our circles, alone in our ignorance of what a “Joe Exotic” was, or why we should have opinions on the final fate of Carole Baskin’s husband, as if she were the subject of the all-time greatest episode of Snapped.

My wife Anne and I rarely watch popular TV shows. We’re not ones for following the herd or bowing to peer pressure. But we found ourselves worn down by every absurd mention, every befuddling joke, every sequence of words which made no sense strung together and yet which obviously had something to do with Tiger King. I never watch reality shows in which camera crews follow hollow celebs with their permission for years and years as free publicity for undiscerning superfans, but this wasn’t exactly that. Technically. Kindasorta.

It’s a seven-part documentary (for now), which sounds more dignified, close to scholarly. Netflix has produced and/or exhibited some solid content in that arena. I’ve seen all their last few years’ worth of Oscar-nominated offerings. Shirkers was outstanding and robbed of some deserved awards love, and their take on Fyre Festival was educationally horrifying. We just watched Wild Wild Country a few weeks ago. And “documentary” raises more erudite expectations than “reality show”. We threw caution and independent thought to the wind, and we worked Tiger King into our viewing schedule.

I hadn’t planned to write a full review because I was reluctant to devote that particular, lightly sanctified head-space to the outlandish spectacle of Joe Exotic. It’s also tough to discuss without spoilers, and there are a ludicrous number of surprises to spoil. By my count the first episode alone contained a new, shocking revelation roughly once every fifteen seconds. As each unbelievable tidbit was flung into the viewer’s face, my poor brain struggled to digest what I’d just been exposed to, only to recoil moments later at some other revolting development. After forty minutes my “wait WHAT” facial muscles were sore from the intense workout.

There was a lot to digest. A lot. An array of giant cat-farm owners with severely flamboyant personality disorders. The feuds. The wounds. The deaths. The costumes. The prison records. The political campaigns. The YouTube channels. The music videos. The few genuine animal caretakers. The several well-intentioned rubes. The sketchy interlopers. The parallels between Bhagavan Antle and Wild Wild Country‘s Bhagwan Shree Rajneesh. The herds of animals either frolicking or catatonic — some of them young and adorable, some of them larger and majestic, many of whose mouths say “ROOOAAAR!” but their eyes say “PLEASE SAVE US.”

Finding sympathetic characters was a chore in a crowd where, as my wife aptly put it in her final analysis, “All these people need Jesus.” I never rooted for Joe. I see acutely diminishing returns in laughing at someone rather than with them, especially if it’s as a defense mechanism. I wanted to root for other animal park owners, but cracks appeared in every single facade. A couple of Mr. Exotic’s former employees do deserve praise for properly sorting their priorities amid this mess. In a better world the series finale would’ve ended in a steel-cage match between Mr. Exotic and Erik Cowie, the increasingly furious hair-metal-esque keeper who, as edited by the filmmakers, seemed among the few to take the animals’ best interests to heart.

I’m also not exceedingly angry at Carole Baskin. If, for just a minute before coming back to it and never letting it go again, you can set aside that disappeared first husband who clearly didn’t die in his sleep from natural causes, then at most she’s a happy, obsessive cosplayer who super-loves animals, whose worst crime might be hypocrisy. After the alleged hubby-hit-job thing, I mean. I don’t get anyone who holds up Joe Exotic as an unassailable paladin of truth while condemning Baskin in the same troll-scented breath.

And that’s about as much contemplation as I care to put into it. Meanwhile, according to Nielsen ratings, millions of other viewers can’t get enough. Facebook alone is a premier destination for Tiger King fans who can handle way more Joe Exotic in their media diet than I can. 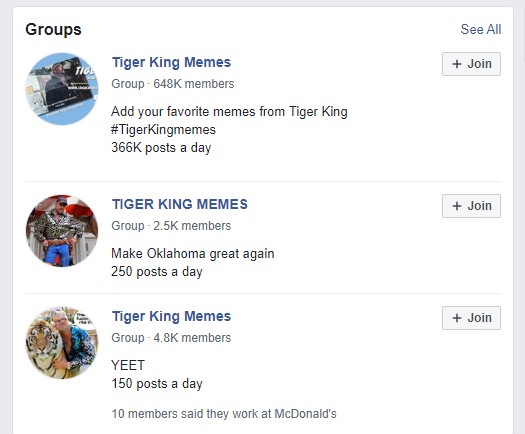 Looking to keep track of the latest Tiger King jokes and memes? Check. (And, uh, thanks for the very concerning McDonald’s stat, I guess?

Closer to what I need: support groups for Tiger King viewers. Unless the names are ironic.

I’ve heard of “Wild Kingdom”, but this is ridiculous.

The most disturbing part is how the show’s stories and wandering animals and curious management styles reminded us of one of our road trips. Once upon a time in 2008 our family visited Virginia’s Natural Bridge Zoo and had what we would unanimously not describe as our best or safest zoo experience. Especially after the encounter with the wildcat.

A teenager taking a reluctant wildcat on a walk. What’s the worst that could happen?

The second after I snapped that pic from thirty feet away, the wildcat then turned sharply, gave me a bloodthirsty hissing, and flailed its claws in my general direction until the “trainer” asserted herself and continued the cat’s daily drag in the other direction. Thirty feet, a 90-pound girl, and a Dollar General pet leash were all that separated the cat’s fangs and my jugular.

When my wife and I look back on our travel experiences and tell people 2008 was our least favorite to date, three distinct memories hit me all at once to support this last-place ranking: the intense, persistent pains that made me miserable all week long; the endless, oppressive sunshine that doubled our negativity whenever something went wrong; and the killer cat that thought I would make an excellent scratching post.

It isn’t my favorite vacation memory. Thankfully no physical harm came of it. In hindsight it’s also for the best that, when we asked about their signs advertising tiger cub petting, we were told they weren’t doing those that day. More than likely we couldn’t have afforded it, and now I’d be ashamed of it if we had.

Among the many memorable images and charts shown in Tiger King was a U.S. map with red pinpoints of all the zoos, wildlife preserves, and other creature exhibitors who could be connected to the same exotic-animal trade network as Joe Exotic’s park. At least one red pin was stuck firmly in the vicinity of Natural Bridge Zoo. My reaction: dull surprise.

Much more surprising: I learned Joe Exotic’s former dominion and Natural Bridge have other things in common. A new PETA article commends Virginia’s passing of a law that would effectively outlaw tiger cub petting and other interactions between customers and lethal animals. They single out Natural Bridge for condemnation and drop some fun trivia in a subsection titled “Connections to the Hit Netflix Series Tiger King“:

In 2015, the Humane Society of the United States released an investigation of NBZ, which showed Gretchen Mogensen — daughter of zoo owner Karl Mogensen — striking tiger cubs in the face and allowing the public to handle the distressed baby animals. According to the video footage narration, the animals were kept deliberately hungry so that they could be more easily controlled during public handling sessions.

Following the investigation, Gretchen Mogensen fled Virginia with two cougars, a tiger, and several other exotic cats. She went to Myrtle Beach Safari, run by the notorious “Doc” Antle. After that, she worked at G.W. Exotic Animal Memorial Park, also featured on Tiger King. Her fiancé served as a camera operator for Joe Exotic and directed his music video “Here Kitty Kitty.” Mogensen is now back in Virginia at NBZ.

See what I meant about shocking revelations roughly once every fifteen seconds? The whiplash effect of those two paragraphs is Tiger King in microcosm.

But I can’t keep dwelling on this. I’m tired of the new, shocking revelations. I need to move on. I’m trying to commit to that. It’s beginning to feel like a sickness, non-lethal yet in dire need of treatment. Call it “trainwreck poisoning”.

I’ve even tried to devise my own multi-step program to lead myself away from the temptation to gawk and mock. It’s a work in progress, but so far the steps to recovery include:

Once the perpetrators’ collective fifteen minutes of infamy have expired, perhaps some other TV show will come along when we’re not all weakened from socially distancing and mesmerize us with actual virtues so everyone can go follow that instead and let Joe Exotic fade naturally from memory, if such is at all possible.

In the meantime, Anne and I are retreating to the safety of saner, nicer characters in settings where people aren’t so outrageous or cruel, by which I mean House of Cards.