It’s not easy to drum up excitement for a President who had to follow a memorable showboat like Andrew Jackson, who inherited a major recession without any tools to deal with it, who got clobbered four years later by William Henry Harrison, and whose Presidential campaign popularized a hand signal that became an acceptable part of American casual communication from two full centuries ago until about fifteen minutes ago last month.

But by dint of the dignity and respect that older generations perceive as inherent in the Office of the President, Martin Van Buren netted himself a place in American history anyway.

After fetching breakfast in Albany past a procession of panhandlers, we checked out of our hotel promptly before 8 a.m, meeting the parking meter deadline according to plan. For the next several hours our path would take us along the eastern side of the Hudson River. We couldn’t afford to stop everywhere we wanted, though — we had a timed, prepaid event scheduled in the late afternoon that would be challenging to make if we lingered anywhere too long.

One last Albany sight loomed before us on our way out of town: the former Delaware & Hudson Railroad Building. Once upon a time this 1914 structure was deemed a great way to block everyone’s view of the unsightly waterway commerce that was the Hudson River eyesore at the time. Today it’s the main office of the State University of New York.

The central tower is 13 stories tall and capped with an 8-foot weather vane, hard to capture while I was driving. It was the same tall structure that greeted us when we first approached downtown Albany.

Twenty miles down the road we pulled into the town of Kinderhook, NY, a Dutch settlement dating back to the mid-1600s. It was there that Martin Van Buren would be born, later to become our first U.S. President actually born in America, our first Dutch-American President (and not the last), and our first to President whose family hailed from anywhere besides England. In a sense, his election was another firm step toward cementing our collective insistence that America was not destined to remain England Junior forever.

As an adult his law career would likewise begin and flourish in Kinderhook. This in turn led to politics, up to a stint as a State Senator, parlayed in turn to his election as Governor of New York. His term ended 43 days later when another job offer came calling — Andrew Jackson invited him to be his Vice President after the disgusted resignation of previous officeholder John C. Calhoun. Van Buren later picked up the Presidential baton with Jackson’s blessing, as well as the curse of a major recession left in Jackson’s wake. Caused either by corrupt banking institutions or by Jackson’s veritable War on Banks, depending on who you asked, the economic mess led to the Panic of 1837 and overshadowed Van Buren’s entire single term.

For nearly 200 years Van Buren’s biggest claim to fame was his part in the alleged origin of the universal “okay” hand signal, ostensibly evoking his onetime nickname “Old Kinderhook” during his Presidential election campaign. The accuracy of this legend remains unconfirmed, but in recent years the internet has singlehandedly destroyed this modest legacy. As of 2018 the OK signal, benign for multiple generations including my very own, has now been declared a Thing of Pure Evil and/or Stupidity for reasons I refuse to recap here because the nonstop eye-rolling would irrevocably damage my vision, which I need for work. I can only add that this extremely recent, utterly mind-boggling controversy is not Van Buren’s fault.

As it stands, the best Van Buren can hope for is that you might remember him from such films as Steven Spielberg’s Amistad, in which he was played by the ironically British, emphatically non-Dutch actor Nigel Hawthorne. But honestly, who remembers Amistad?

Anyway, onward. With further attempts to return to political life ultimately amounting to naught, Van Buren lived out the rest of his post-Presidential days in quiet little Kinderhook. When the Civil War reared its terrible head, he and other living ex-Presidents sided with President Abraham Lincoln, but a suggested collaboration on a shared public stance never quite came together. Van Buren passed away in 1862 and was buried in his hometown at the cemetery of the oldest neighborhood place of worship. A grateful Lincoln issued a Presidential eulogy in his honor.

Our first stop in Kinderhook was at a decorated intersection where we found the Van Buren statue seen in our lead photo, along with other mementos.

The local big rooster, which shares a color scheme with Rastafarian culture, the flag of Lithuania, and Mister Miracle. 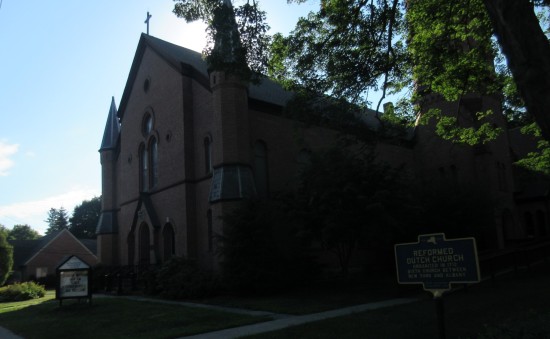 Their congregation dates back to circa 1677 per their website. Their current building has stood since 1869. 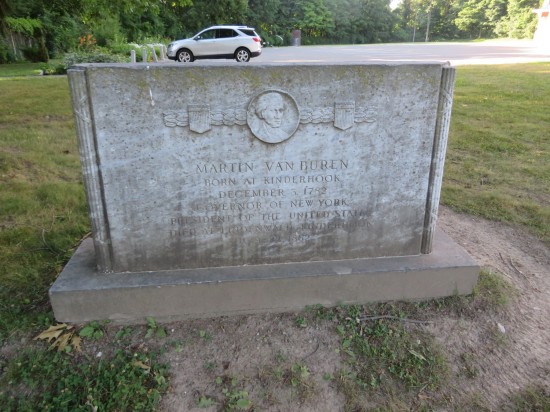 A stone marker on their side lawn salutes Van Buren’s significance on local and national levels.

We walked around to the back of the church and scouted for their cemetery. At first glance, we saw a grassy field. A dense line of trees separated their mostly unremarkable property from their neighbors. We saw no tombstones.

Giant metal word balloons imply that someone once pretended to have super-sized conversations here.

This unlabeled construct stumped us. A metal closet? A brig? An outhouse whose fixtures were stolen and sold off for beer money?

A gap in the far fence appeared to lead to a tiny creek or basic ditch. Beyond lay more houses of the living, no signs of Presidential honor. We returned to the front and tried searching on the other side of the street.

Again we found no dead, only a historical marker retracing a few footsteps of British loser General John Burgoyne after his surrender at the Battle of Saratoga.

We paused our searching while I rechecked online resources on my phone. I gnashed my teeth at a geographic discrepancy. Yes, Van Buren was indeed buried in the Kinderhook Reformed Dutch Church Cemetery…which our initial sources failed to mention was a mile up the road from the church, not next door as I’d imagined and assumed would be the standard method for church cemetery design.

We returned to the car after so many wasted minutes and drove directly to the cemetery. The main road split it in twain. Cars were not allowed inside the older half where Van Buren lay. We parked in the newer half, on a narrow gravel path, probably to the consternation of two groundskeepers trying to mow, and walked across the street to our objective — the fourth of our nine Presidential gravesites.

At last, the Van Buren marker we were looking for. No more red herrings.

Buried at his side is his wife Hannah, who died in 1819 after twelve years of marriage and five children, well before he was elected President in 1836. Van Buren never remarried. 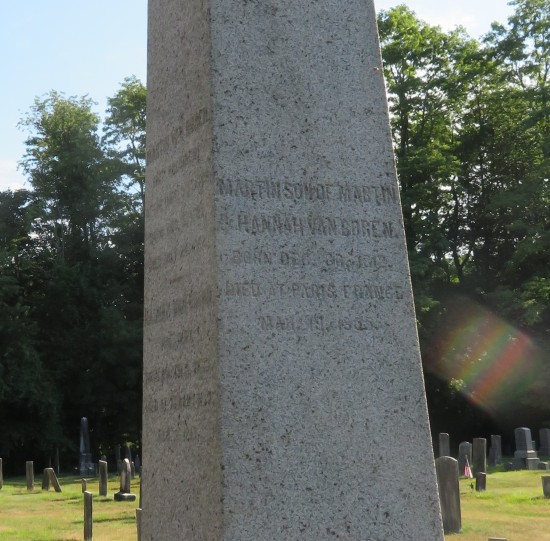 Also sharing this plot were his parents and one of their younger sons, Martin Jr. One of his older sons was buried in the Bronx; another was at Albany Rural Cemetery, where we missed him the day before. 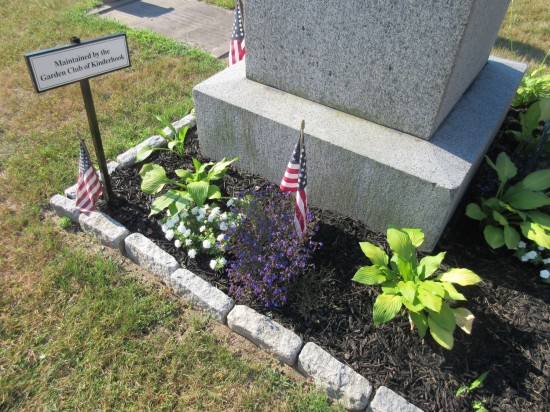 Whether great or small, all Presidential burial sites have folks who take pride in maintenance and upkeep. 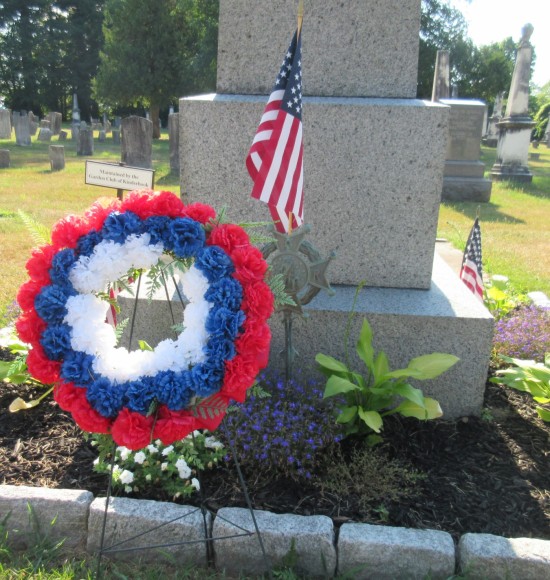 If the obelisk hadn’t been among the tallest headstones in the cemetery, this bright wreath stood in front of it as a secondary pointer toward Presidential stature.

If we wanted to dive more deeply into the Martin Van Buren experience, three miles away was his former estate of Lindenwald, which was opened to the public in 1974 as the Martin Van Buren National Historical Site. It was neither related nor adjacent to the church or its cemetery, but offered exhibits and further insight into our Eighth President’s accomplishments, or at least what he could manage under the stressful circumstances of the time.

Sadly, our timetable constituted a different kind of stressful circumstance. I’m sure Van Buren’s artifact collection has some noteworthy items, but it was ultimately overshadowed by another, larger, more prestigious Presidential historical site down the road, belonging to a renowned leader who came along at a time when the world needed an American President who was more than “okay”.