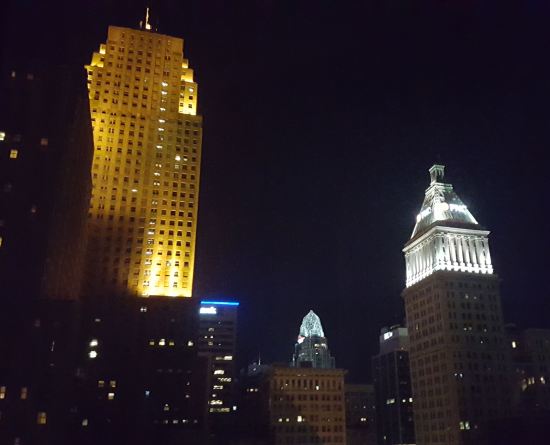 Our hotel room’s view of downtown Cincinnati high above the nightlife.

It’s convention time yet again! This weekend my wife Anne and I have driven two hours southeast of Indianapolis to attend a show we’ve never done before, the seventh annual Cincinnati Comic Expo. With her birthday coming up in a few weeks, which usually means a one-day road trip somewhere, we agreed this would count as her early celebration.

Growing up in Indiana, we Hoosiers rarely had reasons to visit next-door Ohio until and unless it was time for another one-day family road trip to Kings Island Amusement Park, a few miles north of Cincinnati. If you believe the movie Anomalisa, the only two reasons to visit Cincinnati itself are the Cincinnati Zoo and Skyline Chili. After we wrapped up our Cincinnati Comic Expo experience, we did none of those things and found a few reasons not to be bored anyway.

The convention had us spending most of our time wandering downtown Cincy’s Duke Energy Convention Center, which is smaller than ours back home in Indianapolis, but perfectly functional and gifted with far better food vendors. Best of all, the Center’s southeast corner was right across the intersection from our hotel. The convention convenience is considerate and keeps con-goers convivial. 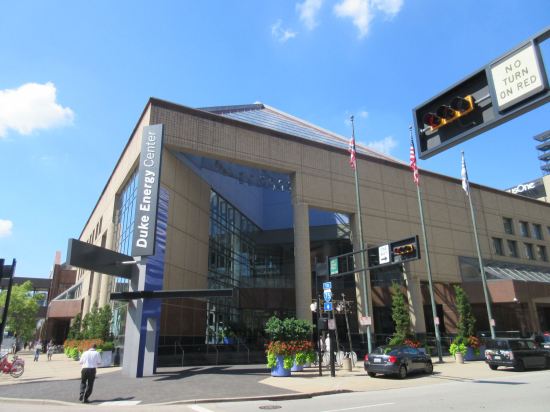 If you gotta throw a comic con and stuff it full of back-issue boxes, at least get you a place with some elbow room.

We accomplished so many con goals on Friday that by noon Saturday we both felt we’d gotten our money’s worth and took our leave. Anne and I strolled downtown for a spell in search of lunch and sights, whichever came our way first. 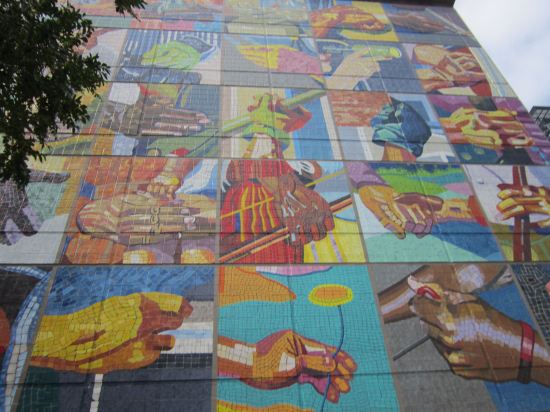 The art started with the Duke Energy Center, whose northeast corner sports this mural. 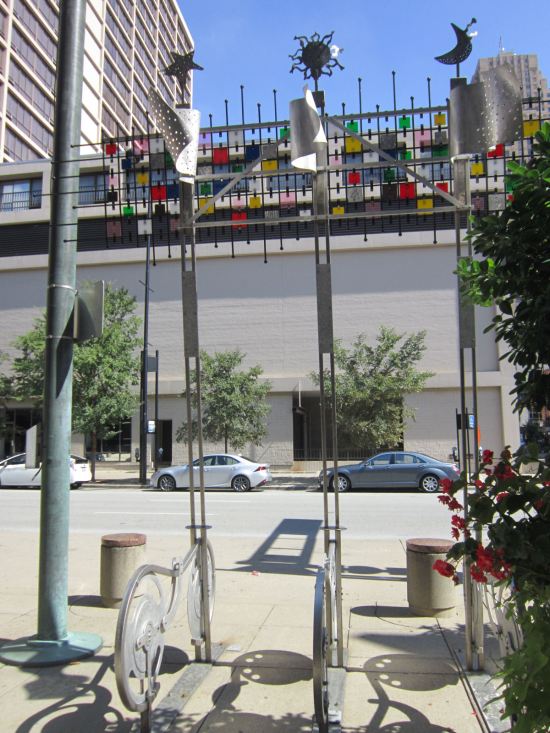 If you rode your bicycle to the con to do your part in helping the environment, you can chain up to the Star, Sun, or Moon rack. 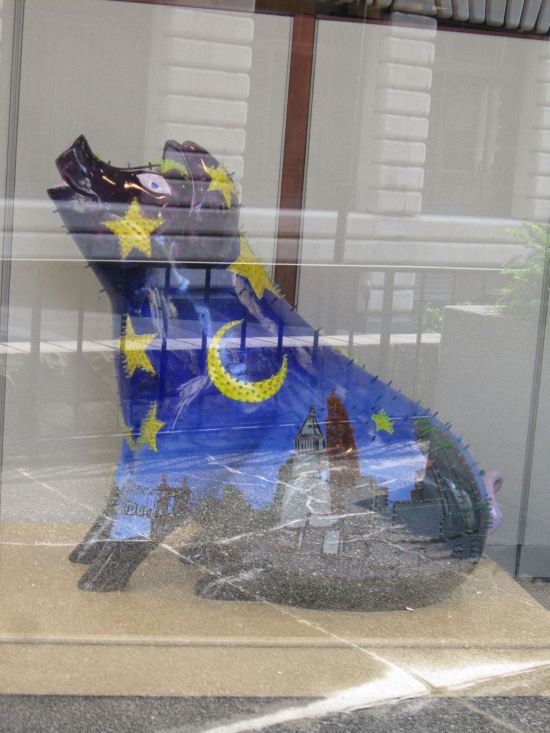 We understand downtown has a number of pig statues stationed here and there, but the only one we saw on or walk was this fly-by-night pig inside PNC Bank. 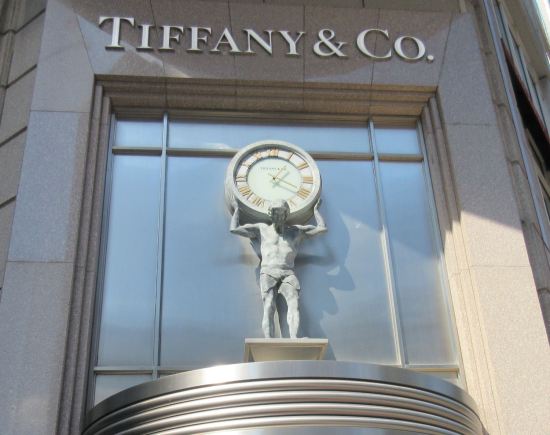 Tiffany’s brings a touch of the classics to the sidewalk art scene. I’ve no idea if there was more inside because we can’t afford to shop at places like Tiffany’s.

Sample public display of hometown pride for the Cincinnati Bengals, who as of this writing are nearly on even footing with our own Colts. 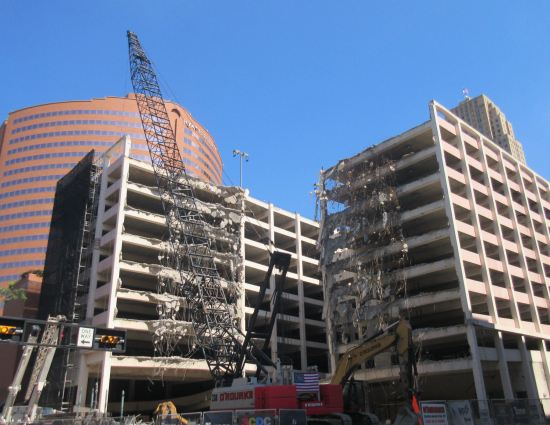 Sure, most folks wouldn’t call demolition art, but I couldn’t help staring.

For lunch we headed over to Bru Burger Bar, a trendy eatery with five Midwest locations including two in Indy. We’ve been there before but haven’t tried everything on the menu yet, so this was a fine choice for milady’s early-birthday-weekend repast. They were a few blocks east of the convention and not crowded at all. 11/10 would keep trying again until entire menu has been sampled. 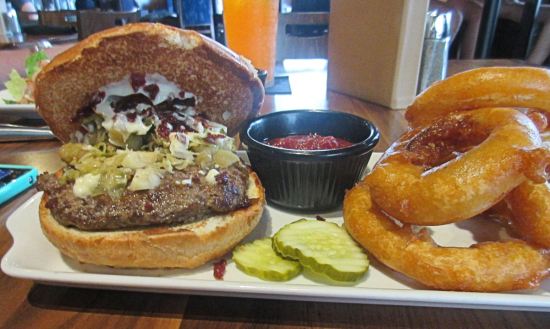 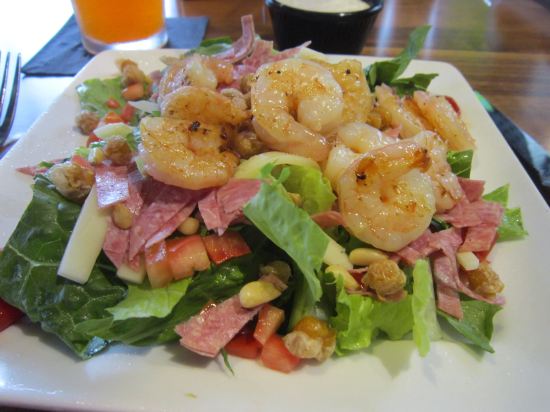 Her meal had the deceptively simple name of “Chopped Salad” — salami, provolone, pickled peppers, crispy garbanzo beans, pine nuts, tomatoes, and oregano vinaigrette. For a few bucks extra she had them toss on a handful of shrimp because birthday.

After we left downtown but before we paid a visit to the late William Henry Harrison, we detoured west of town for a quick gander at the former transportation hub known as Union Terminal.

Fans of comics and cartoons can guess why we wanted to drop in. 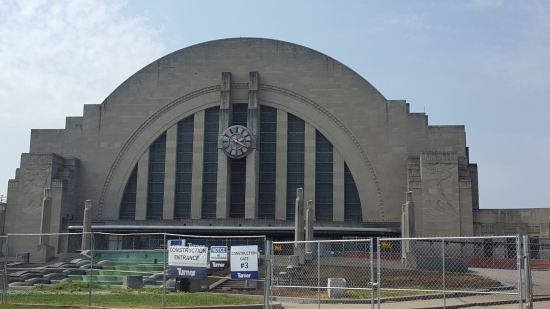 MEANWHILE, AT THE HALL OF JUSTICE…

At its height in the early 20th century, Union Terminal serviced seven different railroad companies and saw hundreds of trains roll in every day. It may not have had as much press or pop culture presence as Manhattan’s various major stations, but that architecture and its prime Midwest location gave it meaning and purpose till the ’70s, when Amtrak more or less began to de-emphasize its prominence and eventually ushered it into retirement. The animators at Hanna-Barbera, owned by a Cincinnati company at the time, would subsequently immortalize it as the distinctive model for the Hall of Justice. 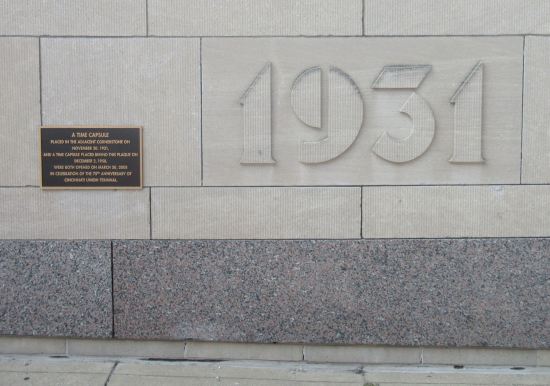 Sadly we were too late to catch any of their time capsule openings.

The heavily repurposed Union Terminal now hosts a few museums, including the Duke Energy Children’s Museum and both the Cincinnati History and Cincinnati Natural History Museums. We drove up, paid for parking, and hoped to see how far we might get inside without paying, in hopes of marveling at the interior architecture. Unfortunately the front lobby is a big white box housing a ticket window and an elevator that lets you sneak down to one of the museum’s restrooms, but no farther. We made the most of the stop before the two-hour drive home, but it wasn’t quite the photogenic wonderland I’d hoped to find. On the other hand, for anyone who grew up watching Super-Friends on Saturday mornings, or any fellow fans who saw its digitally altered cameo on The CW’s The Flash/Arrow/Legends of Tomorrow crossover two weeks ago, Union Terminal was a nifty capper on an already great comic-convention weekend. 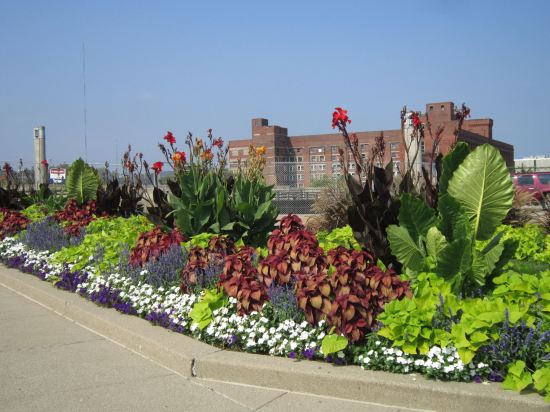 Their ongoing renovations didn’t interfere with their gardens, so I guess our six-buck parking fee wasn’t 100% wasted.

Anne and I expect we’ll return to Cincinnati someday and dig more deeply into the attractions and offerings. We wouldn’t mind at all if a Cincinnati Comic Expo encore factored into our next mini-road trip (or Cincinnati’s other rival large-scale autumn comic-con, for that matter) if timing and guest lists lined up just so. At the very least, we know we’ll have to return someday for the zoo and the chili. 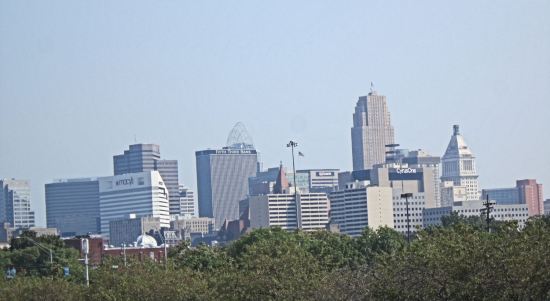 Maybe next time we can find the place where they filmed bits of Tango & Cash. Or, y’know, something classy.

The End. Thanks for reading. See you next road trip.

The preceding entry was Part Six of a six-part MCC miniseries covering our two-day visit to Cincinnati, September 24-25, 2016. Other chapters in the series are linked below for reference. Thanks for reading!