Props to director Denis Villeneuve (Prisoners, Sicario) and screenwriter Eric Heisserer (whose last film was this summer’s Lights Out) for picking up Christopher Nolan’s baton in composing a critically acclaimed non-superhero non-toyetic non-franchise non-reboot non-cheesy science fiction film in 2016 on a modest budget without a Top-40 soundtrack and without the studio announcing plans for the next three increasingly cash-grabby sequels before the Monday after opening weekend. For triple extra credit, next time I dare someone to try doing the same without well-known actors in the lead roles.

Short version for the unfamiliar: In this adaptation of Ted Chiang’s Nebula Award-winning short story “The Story of Your Life”, Academy Award Nominees Amy Adams and Jeremy Renner are a linguist and a physicist recruited by the American government to decipher the incomprehensible language of a race of aliens who show up hovering above various worldwide spots in colossal intimidating ships. If they can’t crack the code before other, less patient countries flip their lids, Earth may be either doomed or just really disappointing to our strange visitors from another planet.

That’s basically the entire movie: two hours of watching creative problem solvers tackle purely cerebral challenges while the threat of gunfire action tries to interrupt from offscreen, but largely doesn’t. It’s like you’re sitting at your friend’s PC watching them play a lost Myst sequel. Adams also has a tragic backstory involving an ailing daughter that faintly echoes Gravity, so there’s that.

Hey, look, it’s that one actor!: Rogue One‘s Forest Whitaker is the Army colonel coordinating efforts; Michael Stuhlbarg (A Serious Man, Men in Black 3) is the not-so-helpful hair-trigger Fed playing bad cop to his good cop. Beyond the sea, Tzi Ma (the boss who sends Jackie Chan to America in the original Rush Hour) is the brusque Chinese official who helps escalate tensions and who later helps save the day so the massive Chinese box office will approve of this movie.

Meaning or EXPLOSIONS? What if the first aliens we ever meet aren’t just extras with forehead ridges and skin paint? What if they have absolutely nothing in common with us except life, communication, and tangibility? The odd creatures who make their presence known to Our Heroes — nicknamed “heptapods” for lack of a defining “WE ARE THE [INSERT SPECIES NAME HERE]” moment — manifest completely different if not outright opposite size, shape, texture, physiology, language, technology, gravitational field, and time perception. Even their version of math shares the barest tangents with ours. It’s up to the humans to learn how to cope with beings who are not like them in virtually every conceivable way.

The answer: science! Lots of it. As with The Martian, Interstellar, and other predecessors, Arrival has no interest in rebel starship battles or besieged futuristic utopias or Will Smith punching invaders in the face. Authentic science, or at least a simulation complicated yet credible enough to entice us laypeople to buy in and follow along. It’s encouraging to see audiences willing to support exotic endeavors minus explosions.

All of this serves the driving parable that’s plagued man since Babel. The seemingly simple question “Can’t we all just get along?” begs a preceding question: can we talk? All of us? Like, really talk? In the film, the gulf between parties results from differences between cultures, species, and planetary origins. Here in real life, the differences are technically narrower and yet divide us more harshly and proudly than any of the benign conversations Adams or Renner face. If we can’t develop the necessary skills as a series of interdependent societies to hold simple, civilized conversations across our largely self-imposed divides here on Earth, how do we expect to establish meaningful communications beyond our own planet?

Later in the proceedings, the film also dips into the concept of eternalism (cf. Vonnegut’s Slaughterhouse-Five, Dr. Manhattan from Watchmen), but that way lies spoilers.

Nitpicking? Though more than half the film is as close as Hollywood generally gets to “hard SF” in the grand SF-lit traditions, farther along (and yet there all along, in a sense) there’s a critical plot point that needs viewers to brace for a hard shift from pure lab science to Twilight Zone fantasy twist. The central metaphor needs that twist for all its emotional connections to work, but skates past any attempts at a satisfying explanation. Either a two-hour TED Talk called “The Transmogrifying Effects of Xenolinguistics Education on Human Quantum Neuromechanics” was left on the cutting room floor or we’re meant to take a leap of faith for the sake of alien magic.

The last several minutes of the film separate the believers from the skeptics. If you bought the twist, everything eventually adds up, breaks your heart, and gives you hope that a more peaceful future is possible for life on Earth. If the twist has you calling time-out and demanding a better answer, then everything turns into a kaleidoscopic Terence Malick montage in an effort to dazzle you into shutting up.

So what’s to like? All the spaceship scenery is grandeur to behold — the mysterious floating chunk-ships with their nearly featureless interiors are a long way from the overly detailed miniatures and Jack Kirby techno-terrains of all your fan-favorite sci-fi flicks. The not-remotely-humanoid aliens themselves are like nothing I can recall in cinema, though they may have some obscure sea-plant cousins living in our deepest ocean floors or at a microscopic level. With a production budget reportedly under $50 million, their designers and CG craftspeople implemented a “less is more” philosophy on a level that doesn’t appear to have sacrificed any imagination.

The otherworldly elements are in stark contrast with the down-to-earth, serious-minded professionals tasked with analyzing all this weirdness. Adams and Renner are a perfect match for the material, both mundane yet charismatic, overwhelmed and confident, Marvel/DC Team-Up presents Lois Lane and Hawkeye. Adams in particular cedes the screen to no one, least of all the chest-thumping warmongers who wish she’d stop thinking and give up already so they can fire up their fusillades.

I’ve yet to see any of the director’s previous films, but if they’re as thoughtful, measured, and unpredictable as Arrival is, I’ll need to add them to my want lists. As to whether or not I truly liked Arrival from start to finish without reservation…honestly? I’d have to see it a second time. I have no doubt the narrative structure would benefit from an encore and reveal new details and meanings the second time around. I’d be curious to see whether or not I can take that third-act curve ball without calling foul again.

How about those end credits? No, there’s no scene after the Arrival end credits, but I was amused at one of the final apropos bits in the indicia, “©2016 Xenolinguistics Inc.”

If you’re looking for more fun after the movie, the viral website whyaretheyhere.com takes fans to an 11-minute audio clip of heptapod chatter. If you let all eleven minutes play, or if you skip ahead to ten seconds before the end and just let that play, visitors are next taken to a puzzle page requiring passcodes into twelve different sections…all of which were included on Arrival‘s twelve different posters if you knew where to squint. Completing all twenty-four fields correctly unlocks access to a few collections of extras that, to me, weren’t nearly as fun as the puzzle itself. Because sometimes the mere puzzle engagement process is more meaningful than the revealed results, as Adams’ character comes to find for better or worse. 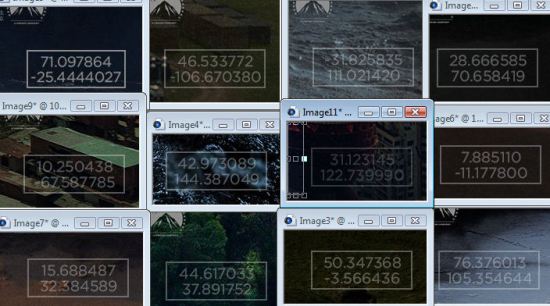 You could call this the homemade answer key I kludged together for whyaretheyhere.com, or you could say this is a new puzzle I reverse-engineered in which you have to figure out which set of codes came from which of Arrival‘s twelve different movie posters. Happy hunting!