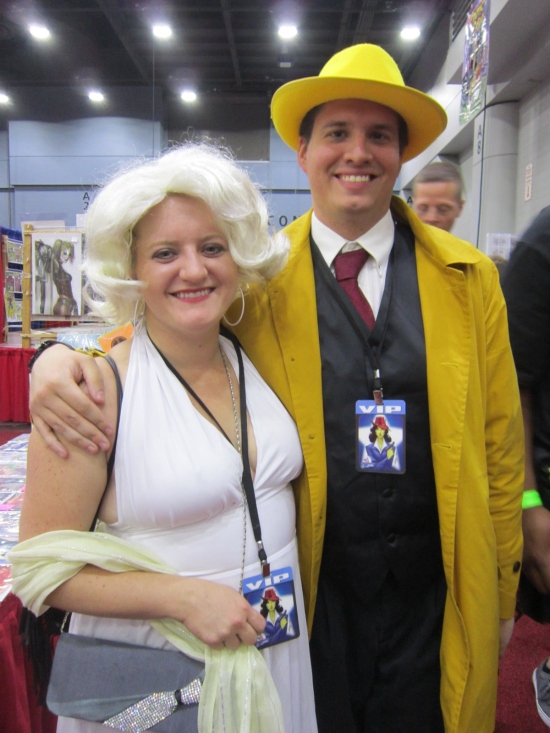 Gracing our presence on Saturday were Dick Tracy and Breathless Mahoney, from that one Warren Beatty film. (No, not Bulworth.)

It’s convention time yet again! This weekend my wife Anne and I have driven two hours southeast of Indianapolis to attend a show we’ve never done before, the seventh annual Cincinnati Comic Expo. In the past she and I have talked about trying cons in other Midwest cities, but the Expo is our first time venturing out to Ohio for one. In addition to proximity and complete lack of schedule conflict with anything else we had going on, CCE’s guest list includes a pair of actors we missed at previous cons who represented glaring holes in one of her themed autograph collections. With her birthday coming up in a few weeks, which usually means a one-day road trip somewhere, we agreed this would count as her early celebration.

But first and foremost as usual: cosplay! Presenting a showcase of all the costumes we photographed during our hours walking through and around the exhibit hall on Friday and early Saturday. So many of these were wonderful character choices that it was impossible for me to point to any one, two, or ten of them and say, “I loved this one most!” Regardless: enjoy the gallery!

SECTION ONE: MARVEL AND DC PRESENT!

There’s exactly one Marvel super-hero comic that my wife reads each month and that comic is Ryan North and Erica Henderson’s amazing colossal Unbeatable Squirrel Girl, and so Squirrel Girl and Tippy get to go first. 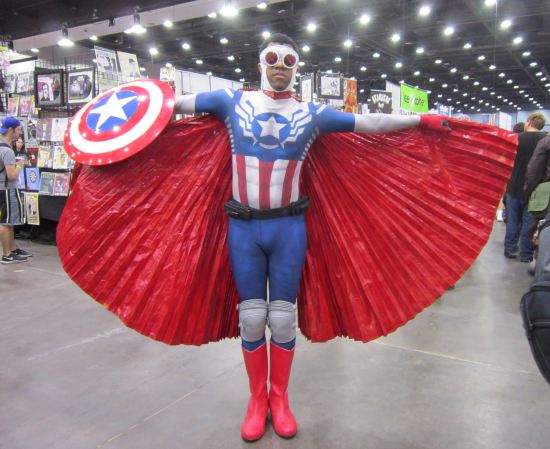 If you haven’t kept up with comics events from the last few years, you may be confused at the sight of Sam Wilson, Captain America. If Chris Evans ever retires, I would pay double ticket prices if Anthony Mackie would follow this fan’s lead. 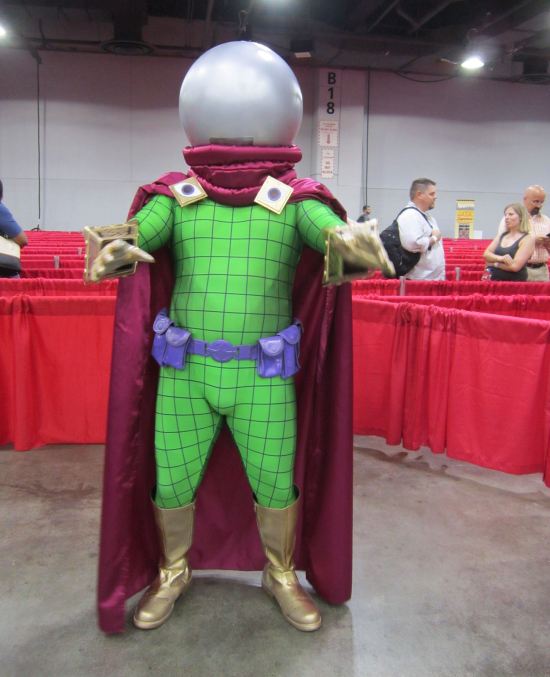 Mysterio, one of the classic Spidey villains who hasn’t jumped to the big screen yet. I’m not sure how well his eyehole worked for him, but he made a clever move of attaching a tiny electric fan inside his helmet.

At every con there’s always at least one cosplayer whose character eludes the databases inside my aging brain. I know Typhoid Mary, a Daredevil villain dating back to the ’80s, but if anyone recognizes her companion, please cure my ignorance and school me in the comments below. Much obliged!

The family that cosplays together: Star-Lord and Rocket Raccoon from Guardians of the Galaxy with Killer Frost from TV’s The Flash. 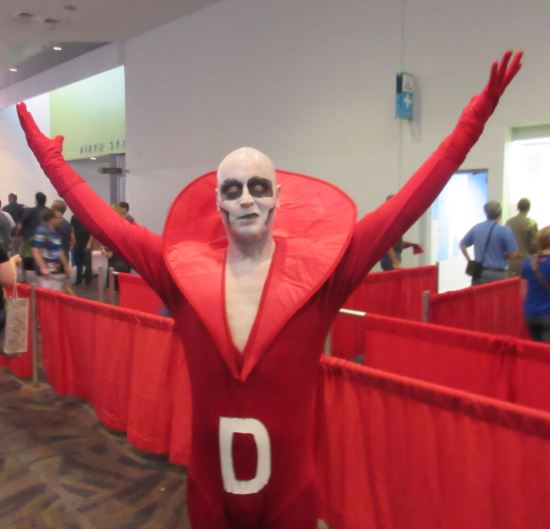 Deadman welcomes you to the world of the really living! 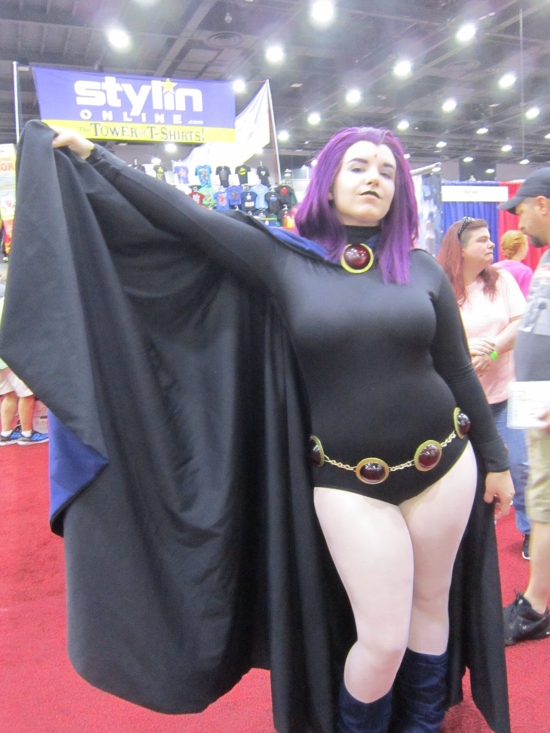 Raven from the Teen Titans! 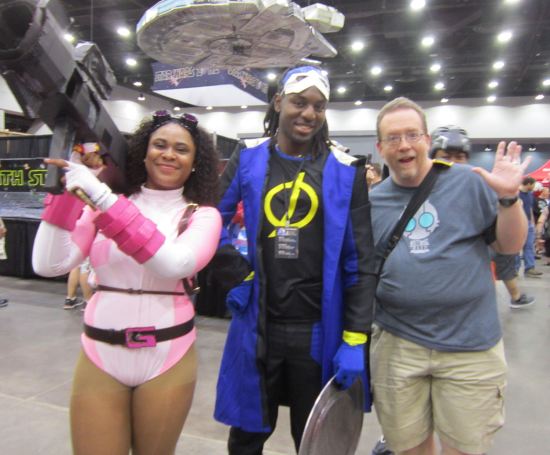 Gwenpool and Static Shock invited me in on this one. Pretend I’m a grateful Dakota civilian they just saved.

Maybe you celebrate only on September 19th, but for Piratepool and Lady Piratepool, every day is National Talk Like a Pirate Day.

To its credit, Cincy had a bigger turnout of Star Wars fans than any other con we’ve attended in 2016.

Skiff Guard and Klaatu, if I recall my old action figures correctly. One of them said hi and recognized us from the Ian McDiarmid/Ray Park photo-op line at this year’s Indiana Comic Con.

Chewbacca and a pair of Mandalorians hang out at one of the con’s extra-large Star Wars dioramas.

Sandtroopers think it’s adorable when normal Stormtroopers try to fit in, only to be the first to complain about dying of thirst in the desert.

I’m currently two-thirds of the way (I think?) through Bioshock Infinite, up to the part where I’m wandering the large marketplace on the way to Comstock’s mansion and a blue ghost is leading me to revealing flashbacks and those disturbing Lutece twins. Booker DeWitt and Elizabeth showed up here for me at exactly the right time, and were careful not to blow any spoilers.

Abby from the Ghostbusters would like to remind a Holtzmann-obsessed internet that the new movie had other worthy characters in it too, you know.

I always brake for Final Fantasy characters like Sephiroth, this time wielding a lightsaber instead of his usual Masamune. Now I want to hear Michael Giacchino compose an homage to “One Winged Angel”. 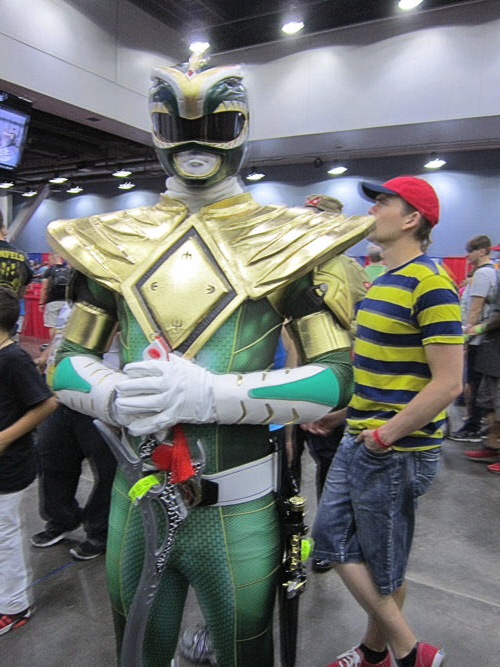 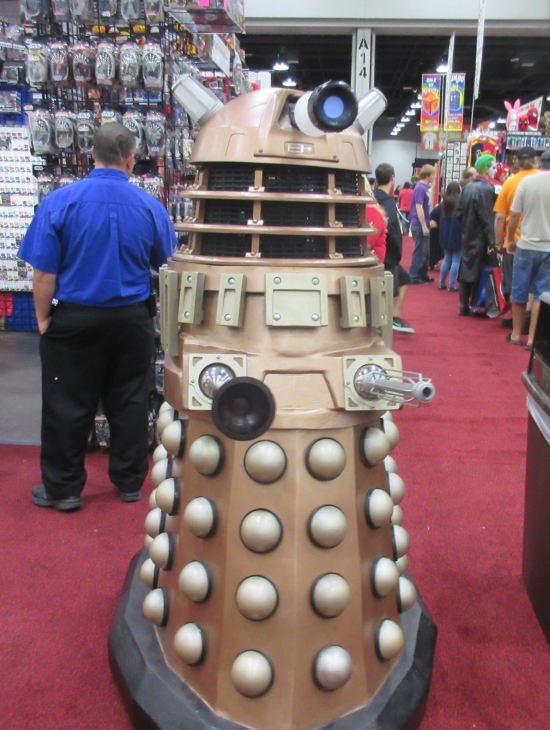 Most convention Daleks are either stationary statues or remote control rigs. This Dalek, on the other hand, was fully sentient and prepared to AM-BU-LATE.

(Special thanks to my son for naming assistance with the most obvious one.)

Click here for the exciting conclusion! With more photos, stories, comics creators, and the tale of how I nearly killed a living legend!