If you’re viewing this photo gallery from a comfy living space on a full stomach, these discount meats probably aren’t meant for you.

[My employers] gave several hundred of us the opportunity to spend half a workday (on the clock!) participating in scheduled acts of service at various charities throughout Indianapolis — charitable synergy courtesy of United Way. I signed up and went forth to serve at Gleaners Food Bank of Indiana, one of the most prominent resources in local hunger relief efforts. Despite their long-standing presence and far-reaching efforts, Gleaners has yet to run out of work. Like any major city, Indianapolis has its share of poverty-stricken residents, food deserts, regrettable layoffs, and hard times during recessions. Officially, the Food Bank doesn’t hand out food directly to the needy; it’s the distributor that provides foods to food pantries, soup kitchens, homeless shelters, domestic abuse hideaways, and the like. The Food Bank, in turn, receives its supplies via donations from the big-box stores (Kroger, Meijer, Marsh, Walmart), from government suppliers, and from food drives held by other corporations and organizations. It’s a complex delivery system with many important components, and help is always welcome.

Your humbled volunteer in his stylish, borrowed freezer jacket.

Earlier this season my company once again sent us forth into the community to serve at various local charities and organizations that could use a helping hand. Employees from our recently added extensions in other states implemented the tradition in their own applicable areas. I re-upped with Gleaners because they’re good folks doing important work, making a difference in the neighborhoods all around us — year-round, not just for the holidays.

This year I was part of a group assigned to refrigerator/freezer duty. The core of our mission was the sorting and inspection of thousands of pounds of random goods shipped in from local supermarkets. Much of their unsold, unwanted merchandise is tossed into the nearest open boxes they had on hand and sent to Gleaners for whatever use they deem fit. To facilitate the eventual distribution process, Step 1 was to sort the donations into various categories — non-perishables, refrigerated goods, dairy products, bakery merchandise, frozen meats, other frozen goods, and a few non-food items, apparently included just because they were in the grocers’ way.

The work pile awaiting us. 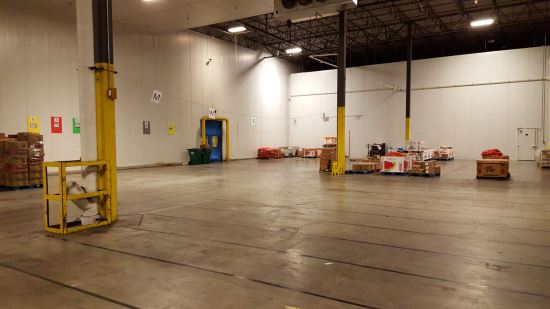 Examples of the random leftovers that come in from every imaginable grocery department. Health ‘n’ beauty items aren’t so useful, and I’m not sure what they plan to do with the protein supplements we found. 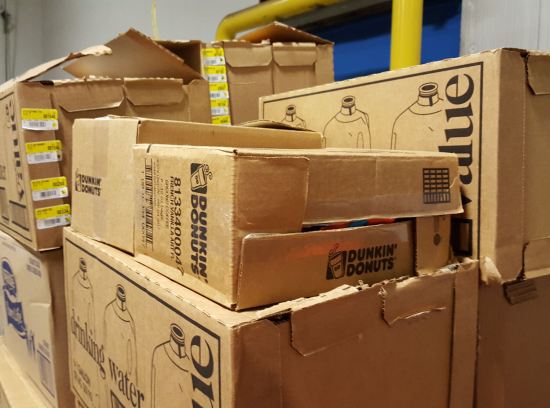 I admit I stared, but we could defer judgment and reason that perhaps there are families who bought Keurig coffee makers and then later suffered devastation and tragedy that led them down this path.

For the frozen meats, we had the added task of conducting closer inspections to ensure none of the items appeared open, contaminated, or disease-ridden. We found quite a few that hadn’t been preserved well and wouldn’t survive the long trip from shelves to shelters.

Maybe it sounds boring and repetitive, but these are necessary steps to deliver mass quantities to the masses who need them. It’s lazy and impractical to send the needy into the warehouse and tell them to grab all they can carry. You’d have heated arguments over cookies, fight clubs sparring over the larger cuts of meat, and next thing you know, the warehouse is being sectioned into turfs and walls start going up. Keeping the process orderly and organized is key to sharing that community love with the widest reach possible.

Also, without an impartial sorting process, this lone box of kale would go totally ignored. Someone has to think about the kale.

Odds are there’s a place like Gleaners not too far from you. You might need them, or they might need you. In times like these, whether or not you’re satisfied with the world at large, hiding from each other won’t make things better.

There’s work to be done.