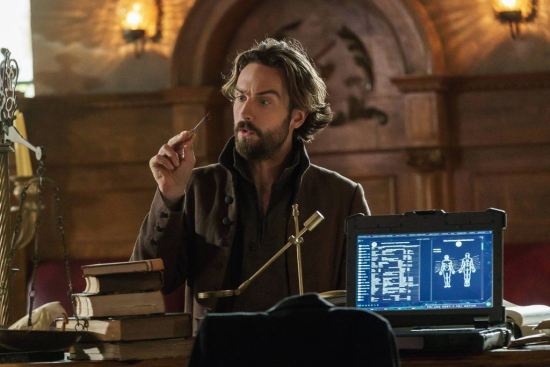 On tonight’s new episode, “This Red Lady from Caribee”: Joey Jo-Jo Junior’s daddy issues make things worse! Our Heroes fight a woman made of wasps, and when she yells, she shoots wasps from her mouth! Pandora reveals slightly more of her horticultural master plan! And the ostensibly sinister Augustus Nevins finally appears onscreen, played by veteran character actor Bill Irwin, last heard as the voice of the robot TARS from Interstellar.

…our Monster of the Week: the Soucouyant — normally a Caribbean vampire, but in Sleepy Hollow‘s world it’s a lady (stuntwoman Bethany Levy) in a red dress who’s made of Jack Spaniard wasps. Pop-culture entomological antecedents include Marvel characters like the evil all-bee-guy called Swarm and Ant-Man’s partner/wife the Wasp; DC villains Insect Queen and Queen Bee; Roger Corman’s Wasp Woman; and Deep Space Nine‘s Nana Visitor from one of the few episodes of Grimm I ever watched. Stingers are a fairly popular weapon among women of superpower.

As you might expect, the Soucouyant’s component minions carry a most unnatural kind of venom: those who get stung become paranoid and fearful of everything to a furious degree, and would ruin a lot of elections and social media if they lived long enough. Sadly for them and their family, and fortunately for the rest of us, the afflicted burn out and die quickly. In this week’s mandatory “Betsy Ross, Action Spy” flashback, we learn a Soucouyant once attacked General George Washington (Mark Campbell), who survived only because Agent Ross knew how to sustain him for a while with a witches’ brew called “Obeah”, just long enough till she could track down and destroy the Soucouyant’s hive, thus retroactively curing her victims through Lost Boys head-vampire logic.

Pandora unleashes the Soucouyant from her magic box that’s bigger on the inside and sends her forth to instill fear around town by attacking people in leadership positions. Stinging victim #1: Judge Chrysdale (Michael Pemberton, also a judge in season 2 of The Affair), who was supposed to preside over Ichabod Crane’s trial for smuggling that Sumerian tablet over from England in the season premiere. Chrysdale overreacts throughout the simple preceding trial, escalating to a mad shouting of “BAILIFF, DRAW YOUR WEAPON AND ELIMINATE HER!” before he succumbs to his accursed injuries. Victim #2: a local PTA head (Catherine Copplestone) who checks out a stack of banned books from the nearest library, burns them in the grand 1950s tradition, and dies from puritanical glee. Coincidentally, she may also have been stung.

Victim #3: Agent Abbie’s FBI boss Special Agent Reynolds. The wounds magnify his increasing suspicions about sister Jenny’s dealings with crime boss Nevins, aggravating his temper until he drives angry, yells a lot, and tries to attack Abbie. She subdues him in about six seconds and sends him to the underground jail where they previously kept the Headless Horseman and the Wendigo, just in case Reynolds develops sudden Hulk-like tendencies. He doesn’t, but the heavy chains make a handy precaution.

To keep Reynolds alive a bit longer, Our Heroes set about decoding the silly children’s sing-along that masks the secret ingredients to the “obeah”, which in our real world is simply a word meaning “magic”, but calling it a balm or a liniment wouldn’t sound as archaic and foreboding. Most of the ingredients are common spices like thyme, but one stymies everyone, a supposedly rare substance called “chadon beni”. In our real world we call it culantro. Maybe they can’t find it at the Tarrytown Walmart, but you’d think an upstate New York town of 144,000 people would have a great farmers’ market, or at least a Trader Joe’s. But no, Jenny and Kid Joe consult a local mystic shopkeeper named Azzaca (Rotimi Paul) to obtain a small brick of culantro, as seen on TV’s Chopped. They have to bribe him for it because culantro is scary and powerful and no mere mortals can handle it, but he complies because they’re basically paying him a 5,000% markup over retail price.

On their way out, Azzaca is briefly possessed by spirits from beyond and shouts in a spooky voice at Jenny, “A SHADOW OLDER THAN TIME FALLS OVER YOUR SOUL! YOU SHALL BE RECLAIMED!” Then he resumes normal composure while Jenny’s kind of freaked out. Azzaca knows what’s just happened and advises Joe to protect her from whatever comes next. Joe tries his best not to cry and hide under a table.

They toss the magic spice rub together and apply it generously to Reynolds, then triangulate the Soucouyant’s position — i.e., Pandora’s secret hideout — by plotting the homes of her three victims on a map and pinning the center of the triangle they form. Luckily for them that basic geometry was a prime factor in the Soucouyant’s plan and she actually located three prominent leaders living equidistant from her lair and from each other at precise 60-degree angles. Y’know, just like a real wasp would.

Our Heroes storm the Pandora-Cave, whereupon they encounter Pandora sporting a nice new dress and ready to lay out more of her master plan to them: the six unrelated monsters in these first six season-3 episodes were specifically chosen! For her winning ritual, Pandora needed her minions to sow seeds of secrets, chaos, loneliness, innocence lost, death, and fear itself. Those monsters we met — the Yao-guai, the Whispering Wraith, Jack the Ripper, the Tooth Fairy, the Draughr, and the Soucouyant — embodied those necessary evils and were apparently a super-villain team of sorts, ready for their own motion picture in a Sleepy Hollow shared universe. Call them the Six Horsemen of the Other Apocalypse.

While Crane distracts the Soucouyant with his crossbow that’s useless against tiny bugs, Abbie pours prussic acid (a.k.a. hydrogen cyanide) all over the hive, melting it like a bad witch and thereby turning the Soucouyant to dust by association. Meanwhile, everything’s according to plan on Pandora’s end as her mysterious blue tree opens wide and lets her step inside. Abbie and Crane interpret this as a getaway and don’t bother trying to hack it open or burn it down. The tree is still there and looking all menacing, but their job is more or less done and the day is saved as much as it needs to be. They do wonder if it’s perhaps a portal to Hell, but decide to go relax instead of doing any serious Hellmouth research. Back at the hospital, Reynolds snaps awake, fully recovered and conveniently forgetting this episode ever happened.

Other developments this week:

* Crane and Zoe Corinth (Maya Kazan) have their first date at a Japanese steakhouse, with awkward results because they both borrow their stilted banter from the same clickbait listicle. Don’t you hate it when that happens? They make up for it with a second date free of internet contamination, just the two of them walking around outside and enjoying a peaceful meadow. Weirdos.

* Betsy Ross, Action Spy, also knew Abbie’s ancestor Grace Dixon, she of the helpful Sisters of the Radiant Heart journals. In the eighteenth century, America was a small enough continent that everyone pretty much knew everyone else. I’m looking forward to a future Thanksgiving episode in which Betsy teaches the descendants of Squanto more creative uses for maize.

* Crane’s new catchphrase that needs to be on T-shirts: “Don’t acronym me, Leftenant.”

* Gawky Joe holds a meeting with Nevins and agrees to give him the Shard in exchange for more heartwarming stories about his dad. Nevins says only that his dad Sheriff Corbin was no saintly Andy Griffith. The Shard pops open because it feels like it and reveals a weird red dot inside. Nevins threatens to take Joe for the kind of ride that usually ends in fatal injuries, but Jenny shows up, retakes the Shard and her young liability into her custody, and walks away without consequence except for a shooting pain up her Shard-holding arm. Later that night, she dreams of enormous power and Terminator skull-piles, and her arm begins to glow like a monster’s.

To be continued! Next week: Jenny takes over the world, kicks Benedict Joe to the curb, and/or uses her newfound powers to whip up some delicious forbidden culantro dishes.

If you missed any previous episodes of Sleepy Hollow, you can see what’s available online at Fox’s official site, or check out MCC’s own ongoing recaps. Visit our recap checklists for season one and season two, or this season’s recaps linked below for handy reference. Enjoy!