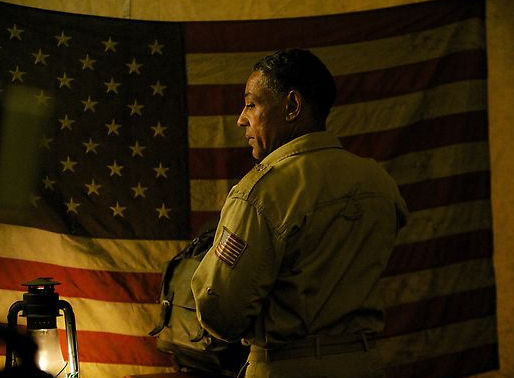 Born down in a dead man’s town! The first kick he took was…and so on.

On tonight’s new episode of Giancarlo Esposito’s Revolution, “Patriot Games”, Tom Neville teaches us all an important lesson about office politics: never let your evil supervisor stand between you and the evil promotion you deserve.

Last week Neville played bootlicker to Defense Secretary Justine Allenford to worm his way into her graces, even though she still doesn’t fully trust him, and even though it meant letting the Patriots do whatever they wanted with his son Jason. Unfortunately the Patriots keep Jason MIA this week, meaning the show has to run on one-half Neville power while he’s off in purgatory or whatever.

After barely proving himself, Tom is graduated from soup kitchen service to boring dock security. As part of his undercover nice-guy act, he breaks up a fight, losing a tooth in the process, only to be lectured by his commanding officer Cook, who can’t stand him and yearns to watch Tom fail and deserve execution. Tom’s facade doesn’t waver one iota as he responds back with a smiling, “Yes, sir!”

Tom, master of spotting enemy weaknesses, notices track marks up and down Cook’s arms. Tom adds two and two, locates Cook’s favorite crack house, greases the madam’s palm with a few diamonds, and purchases himself a two-hour sequestered interrogation room, where he keeps Cook handily tied to his bordello bed. Tom lays down a three-prong ultimatum: he wants a promotion; he wants no more bottom-of-the-barrel work duties; and he wants Jason’s location. Or Else. A hopped-up Cook acquiesces to conditions 1 and 2, but hasn’t a clue about 3. Not good enough. With Tom, anything less than 100% is a failure.

The next day, when Cook doesn’t report for work, Neville steps up and hands out assignments to the other soldiers so the Patriots’ Savannah HQ doesn’t simply grind to a halt without Cook. Allenford is well aware Tom is overstepping his bounds…and yet, he’s overstepping him so well. Tom’s humble smile tells her he’s just happy to be helpful, like any real American should be. Thus is his self-promotion secured.

And that was it for tonight’s episode of Neville Hates Everybody. Tune in next week to see where that seething scalawag schemes his way into next!

While we’re at it, let’s check in with the rest of the cast and how they fared during tonight’s irrelevant skits between Neville scenes:

Rachel Matheson: Still doesn’t know the meaning of the word “patience” and keeps running headlong into trouble. She refuses to obey doctors’ orders to rest and recuperate, but her ugly quarrel wound gives her no trouble at all, though she has to escape one nasty trap by breaking her own thumb. As always, Rachel is scarily single-minded about accomplishing her objectives.

Miles Matheson: Thinks they should lay low and behave for a while until they can get a better sense of the Patriots’ true intentions. Has a brief altercation with several Patriot guards, two of whom get the drop on him but lose the battle when magic fireflies set them on fire.

“Bass” Monroe and Charlie Matheson: The former dictator and his hardcore niece become reluctant road-trip buddies after Bass rescues her from yet another set of random attackers. Bass implies that, despite his mass-murdering past, the Patriots’ presence invokes the old adage about “The enemy of my enemy is my friend,” but Charlie is too young or ignorant to understand. They take turns humorlessly glowering at each other while making their way by makeshift wagon from Pottsboro, TX, to the main stage in Willoughby, which is fictional and therefore ruined my attempts at Mapquesting their route.

Detective Ellison from The Sarah Connor Chronicles: After brief scenes in two previous episodes, we finally learn his character’s name is Ken, he owns a butcher shop, and he’s an undercover Patriot. His advances toward Rachel fail, as does his subsequent retaliation. She kills and buries him, thus depriving me of yet another supporting actor I’ve preferred in other works.

Titus Andover: I was wrong: the leader of the war clan didn’t die last week after all. His lead henchman, another undercover Patriot, merely asphyxiated him into unconsciousness and had him carted out of town. Miles finds him at the Willoughby trainyard and helps him stab himself to death. So now he’s dead.

Ed Truman, U.S. Government: Steven Culp plays the head of the Patriots unit that staged a benign coup of Willoughby. He literally promises Miles and Rachel that they can expect to see more of him. So he’s the new new face of Patriot evil.

Aaron: His Sleepy Hollow premonitions are partially explained: his strange visions are actually provided via magic-firefly-cam. At random moments his brain flips a switch and lets him see through the fireflies’ eyes wherever they’re flying. In one scene he and the fireflies watch Miles skulking through the trainyard; later that same night while he’s asleep, he dreams that he’s watching two armed Patriot soldiers capture and threaten Miles, and then subconsciously reaches out through the fireflies to set both men on fire. So in addition to rising from the dead in the premiere, Aaron is now also Lord of the Firefies. I wouldn’t be opposed to the showrunners deciding that the entire series is his superhero origin story.

The rest of the war clan: The Patriots are keeping them bound and locked up in a boxcar.

Aaron’s girlfriend Cynthia: Stares at him while he’s trying to sleep.

If you missed all of last season and would rather read about Revolution than spend hours playing TV catchup, the MCC recap of the season 1 finale has links to MCC recaps of all first-season episodes, for better or for worse. MCC recaps for the current season of The Chronicles of Neville are listed below as handy reference for fellow members of the fan club. Thanks for reading!