Maybe you’ve seen muscle cars with awesome fire decals, but have you seen a truck engulfed in the very flames of Mustafar?

Vehicles are one of the key components of the Star Wars Universe. Mechanically inclined fans naturally paid tribute to those motorin’ machines, whether with faithful recreations of starships from the films themselves or with Terran vehicles transformed into eye-popping, street-legal homages.

END_OF_DOCUMENT_TOKEN_TO_BE_REPLACED 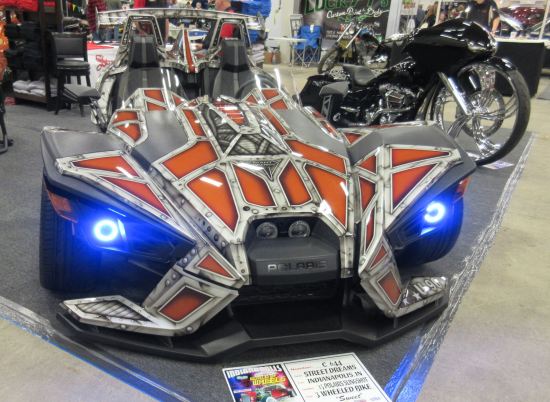 The 2015 Polaris Slingshot looks like a science fiction car, but is in fact a three-wheeled motorcycle that just needs a matching super-hero to go with it.

This weekend my wife and I attended our very first World of Wheels, a popular car show that holds court in numerous North American cities every year. Friends who know us well questioned this choice at first because they know cars aren’t our thing. When we told them our primary motive, they understood and stopped looking at us funny.

Strangers tend to assume I know cars because I’m male. This is incorrect. I’m not one for knowing makes and models on sight, how to disassemble and reassemble engines, how to change my oil, which olde-tyme cars are the most awesome, which parts are which, why anyone should spend more than fifteen grand on one, or why anyone should run out to buy a new car the exact millisecond they pay off their existing car loan. To me cars can be pretty in the same way that flowers can be pretty, and my familiarity both is largely, equally superficial.

But we had our reasons for giving it a go, for trying something new, and for approaching this great big car show as we would any given comic convention: because my wife is as big a fan of classic TV as she is of Star Wars and Star Trek, and they had two special guests she was rarin’ to meet.

END_OF_DOCUMENT_TOKEN_TO_BE_REPLACED

My wife Anne, cosplaying Casual Friday at the Jedi Temple.

It’s that time of year again! Anne and I spent this weekend at Wizard World Chicago in scenic Rosemont, IL, where we generally had a blast surrounded by fellow fans of comics and genre TV/movies even though parts of it resemble hard work and our feet feel battle-damaged after three days of endless walking, standing, lining up, shuffling forward in cattle-call formation, and scurrying toward exciting people and things.

In this penultimate gallery: a look at the cool stuff around the show floor — a little bit of merchandise including snacks, plus a wide selection of the famous replica vehicles parked around the place like it was America’s biggest geek car show.

END_OF_DOCUMENT_TOKEN_TO_BE_REPLACED

Once we returned from the Underground Salt Museum to the surface world, Day Eight of our nine-day journey continued on the other end of Hutchinson at the Kansas Cosmosphere and Space Center. Our family has seen space-race paraphernalia in other museums such as the Smithsonian National Air and Space Museum (2003), Kennedy Space Center (2007), and Chicago’s Museum of Science and Industry (2009), but the Cosmosphere competes in its own way, particularly with souvenirs from foreign contributors to the space race. Kansas seems like the last place on Earth you’d find a dedicated repository for cosmonaut relics, but there it was.

END_OF_DOCUMENT_TOKEN_TO_BE_REPLACED

We ended Day Seven with a hotel stay northwest of Wichita in Hutchinson, a city large enough to have its own dying shopping mall and not one, but two notable attractions. Thus did Day Eight commence in the heart of the Kansas heartland…at the Underground Salt Museum.

I realize the name carries an excitement level on par with a box factory or the state of Delaware, but the Salt Museum is no ordinary salt mine. Granted, yes, part of it is an ordinary salt mine, but we’d never seen one of those before, either. Could it possibly be fascinating to gander inside the workplace that provides us with one of the greatest-tasting minerals on Earth?

END_OF_DOCUMENT_TOKEN_TO_BE_REPLACED

After we reluctantly departed the Royal Gorge Bridge and Park, Day Six continued east on U.S. Route 50 from Cañon City to Pueblo. The distance was a relatively short hop of thirty-five miles, but we paused for one unplanned attraction in our path, the Colonel Leo Sidney Boston War Memorial Park. The park was established in 1997 as a tribute to veterans alive and dead. I’d pegged its location as Florence in my original notes, but online sources say the official address is in Penrose. Its namesake was a Cañon City native who fought in Vietnam, was declared MIA circa 1971, and presumed officially dead in 1997. In April 2011, his family was notified of a positive DNA match for him contained in a set of recovered remains. I wouldn’t presume to imagine the toll of such an experience.

At the time, when we pulled over to the roadside for a gander, we knew nothing about the eponymous hometown hero. All I knew was that we were standing before a military hardware collection stationed in an unusual spot.