My favorite shot of the top deck of the USS Alabama…starring some complete stranger who wandered in the way.

With each year’s travelogue we like to conclude with a second-chance review through the hundreds of photos we took to see which photos were unfairly cut from the final roster, which ones didn’t fit into the narrative but possess their own merit, and/or which ones slipped through the cracks for no valid reason. The twelve pics in this first of two outtake sets were all taken in Alabama, arguably the state where we spent the most time this week, racked up the most driving mileage, and learned the most about through historical immersion.

(As always, photos are clickable for enlargement and resolution and such.)

END_OF_DOCUMENT_TOKEN_TO_BE_REPLACED

The southbound road from downtown Birmingham led us up a ridge called Red Mountain, so named for its red iron deposits and the suitably colored surfaces. Atop one particular crest there’s a park centered around what’s billed as the world’s largest cast-iron statue, molded in the likeness of Mount Olympus’ most underrated resident, the Roman god Vulcan.

END_OF_DOCUMENT_TOKEN_TO_BE_REPLACED 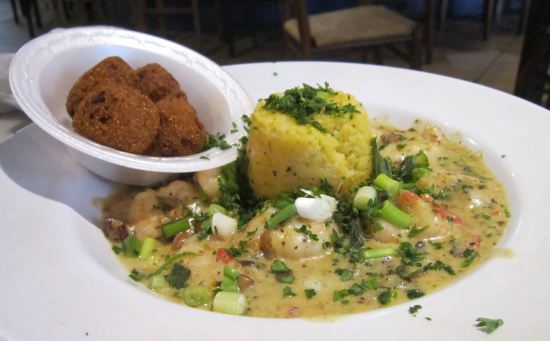 Going into this year’s vacation, we hoped the cuisine would be a highlight at our various stops — be it good ol’ Southern kitchen cookin’, Gulf-sourced fresh seafood, or, really, anything outside of international franchisees. We received our first recommendation from the friendly guide at the Alabama Welcome Center, who insisted that during our road trip we had to try genuine shrimp-‘n’-grits somewhere below the Mason-Dixon line at least once. For lunch on Day Two, I trusted her and gave it a shot.

END_OF_DOCUMENT_TOKEN_TO_BE_REPLACED 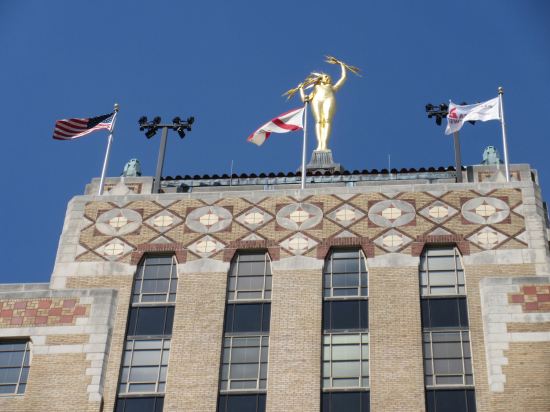 “Electra” has stood atop the Alabama Power Building downtown since 1926. Her origins lie closer to Greek mythology than to any similarly named Marvel characters.

Our two-hour walk around downtown Birmingham on a Sunday morning took us from Kelly Ingram Park to Linn Park to the Art Museum and to other parts here and there. We also stopped at their bus station because Anne had it good authority that they had one of those smashed-penny machines. I don’t mention those often in our travelogues, but those are a big, BIG thing for her. You’d be surprised how many of our stops over the years appeared on her smashed-penny machine master list months before they appeared on our finalized itineraries. This time, though, either her informant was misinformed or the bus station management hid it in some far-off back room. We weren’t prepared to go that deeply into the heart of bleakness.

We took zero photographs of the bus station, but other curiosities caught our eye as we traipsed around town. Electra up there, for example.

END_OF_DOCUMENT_TOKEN_TO_BE_REPLACED

Our Day Two morning walk through the desolate streets of downtown Birmingham took us across the street from the north end of Linn Park and toward the Birmingham Museum of Art. We’ve visited art museums in other cities on past vacations, but we regrettably missed out on BMA admittance because they don’t open till noon on Sundays. We had a busy schedule ahead of us and not much margin for immersing ourselves in the local culture beyond the first few hours.

Luckily for us, the contents of the BMA extend beyond its mere walls and enjoy grassy display space all around the block. We enjoyed what we could on the lap we took. ADVANCE DISCLAIMER: Please disregard our situational example and give money to arts. Thank you.

END_OF_DOCUMENT_TOKEN_TO_BE_REPLACED 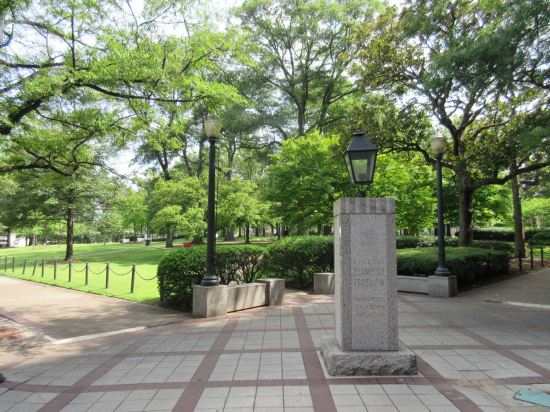 In the last three chapters we walked through Birmingham’s Kelly Ingram Park, which hosted some of the most unforgettable moments in civil rights history and today commemorates those struggles and victories in a forthright manner. It would prove to be a solemn experience for us.

A few blocks northeast is Linn Park, which has the unenviable job of trying to compete against that weighty reputation for attention from the local citizenry. Not that their adjacency has to be considered a competition, but one certainly had more visitors than the other. Calling it the Jan Brady of Birmingham parks would be mean, so let’s not do that. We can instead highlight its prominent aspects, its own graven personalities, its own works of art dotting the downtown landscape.

Exhibit A, pictured above: the Eternal Flame of Freedom, a 1969 American Legion memorial saluting all Jefferson County war veterans, equipped with a gas jet for burning brightly. The flame was out when we happened by, so I’m taking the “burning brightly” part on faith. To me “eternal” implies 24/7 fire, but it’s possible in this context “eternal” means “three shows daily” and we were too early for the first performance.

END_OF_DOCUMENT_TOKEN_TO_BE_REPLACED

The doves are symbolic, but the scene is otherwise as remembered from September 15, 1963, a quiet, graceful Sunday morning at the Sixteenth Street Baptist Church where kids were suiting up for their next choir performance to celebrate another day of joy with thanks to the Lord.

At 10:22 a.m. an explosion of dynamite sticks and unconscionable racist rage left four little girls murdered, two dozen or more injured, and a gaping wound in the side of the Lord’s house.

If you’ve seen Ava DuVernay’s powerful Best Picture nominee Selma, you know when and how it begins. On this very block in Birmingham, across the corner from Kelly Ingram Park, is exactly where too much began that should never have happened.

END_OF_DOCUMENT_TOKEN_TO_BE_REPLACED

During our sobering Sunday morning walk through Ingram Park, we saw small circles of chatting friends sharing the central commons area, while homeless stragglers reserved an errant bench here, inspected yesterday’s discarded leftovers there. All of us were equally surrounded by statues honoring those who fifty years ago walked, gathered, and fought on this very block for a better world. The reminders are impossible to ignore, but it’s up to each of us to heed them.

END_OF_DOCUMENT_TOKEN_TO_BE_REPLACED 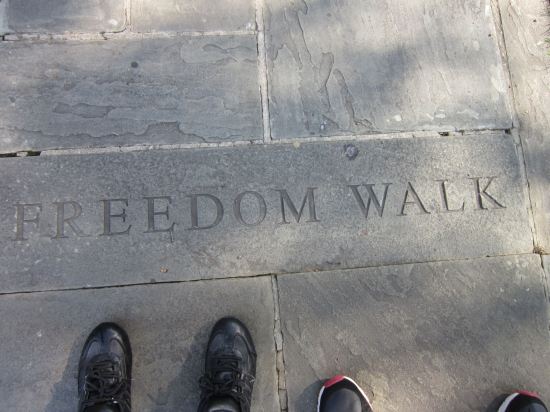 Day Two, early Sunday morning in Alabama: we arrived at our first stop in the heart of Birmingham, a few hours before most of the city would wake up, some fifty years after our country began to wake up.

The four-acre Kelly Ingram Park is an idyllic public gathering spot, a touch of verdant life in a graying downtown, and a momentous landmark of tumultuous times. In the 1960s the stone walkways beneath our feet once hosted impassioned demonstrations against oppression, segregation, and various acts of racism both institutional and internal. Today various signs and statues around the park serve as reminders of what it was like to walk in their footsteps and stand where they took a stand.