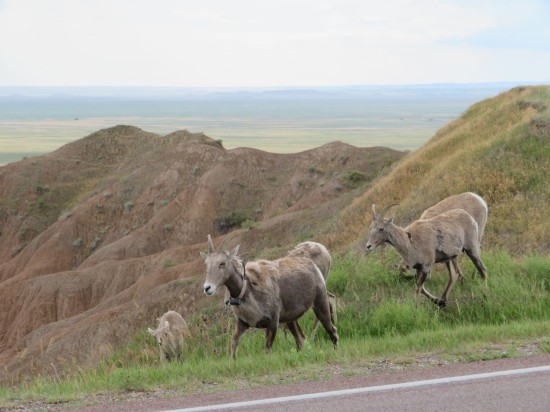 Goats on the run from paparazzi.

Onur first visit to South Dakota’s Badlands National Park back in 2009, it was hard to stop taking photos. The same held true with our return engagement, which is why they’re getting two galleries. This one features a key difference from the other one: signs of life in the photos besides rocks, nature, and geological beauty. Animals! People! Literally signs! And more!

Anne got out to snap a pic of the park entrance. Another tourist helpfully offered to take her photo. Then she had to take photos for the next sixteen tourists after her.

And now, back to more Badlands, already in progress.

A real, live prairie dog bows before its master.

I nearly made this the lead photo because awwwwwww, but then I remembered that one time I thought meerkats were cute and readers didn’t care, so the prairie dog can just shut up and chill out. 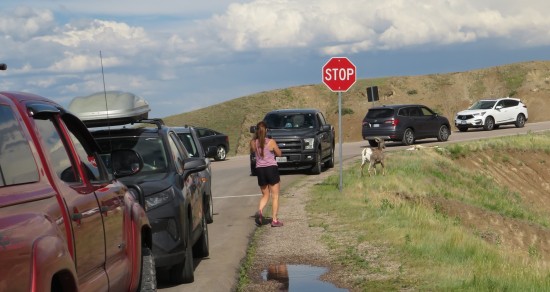 Also roaming the park were wild herds of untamed SUVs that clustered like wolves whenever a stray goat happened by.

Same goat, not having it and fleeing down the nearby steep slope where humans surely cannot follow…

…except with our optical zooms maxed out a few hundred feet away.

The only goat that would make eye contact with us.

Signs warned us other local lifeforms might do damage, but we never ran into them. Maybe that’s what the three young ladies at far right found.

Also a good general rule: don’t park to take a photo of the NO PARKING sign.

Most folks are too astonished by the Badlands to speed through, but someone out there was a traveler so unimpressed that they needed signs to tell them, “SLOW DOWN! YOU’RE MISSING IT! AND DRIVING UNSAFELY!”

Somewhere in the Badlands, heavy digging is allowed.

As folks sought refuge in their pandemic-era getaways, they guest-starred in many of our panoramas.

Parties generally distanced from each other, pretty much as they did pre-pandemic for “stranger danger” reasons.

Occasional amateur adventures would rise above the Badlands “easy” level.

Anne avails herself of the educational plaques in one of the more populated areas. 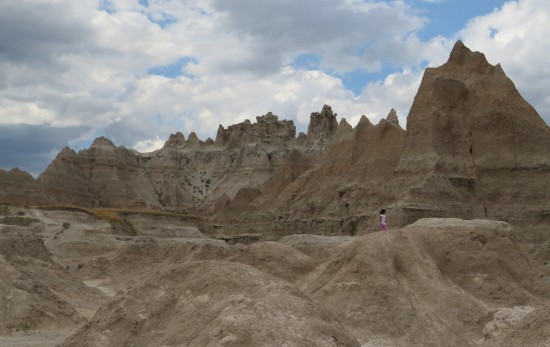 A tiny girl enjoys quality time away from her family, possibly in search of more goats.

In some parts you can walk out from street level to the tops of peaks, have someone take a pic 200 feet away, crop out the street-level portion and make you look like Hillary and Norgay.

Per the park map, at far right is technically a Point Of Interest. As is arguably every single square mile around us. 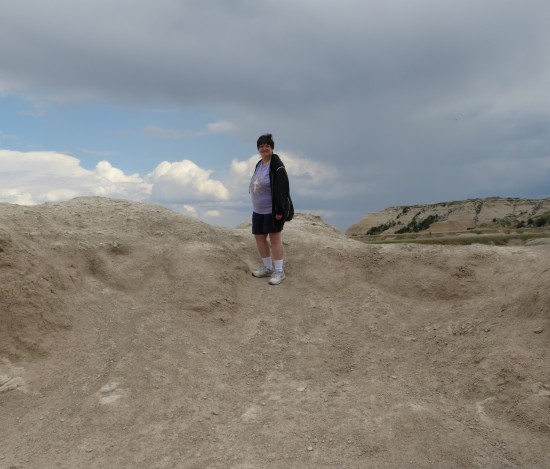 Anne climbs a peak more suited to her altitudinal preference.

…and then a couple hours later we finally moved on toward Rapid City, which contained far fewer natural wonders but in its favor did have a hotel and some food.