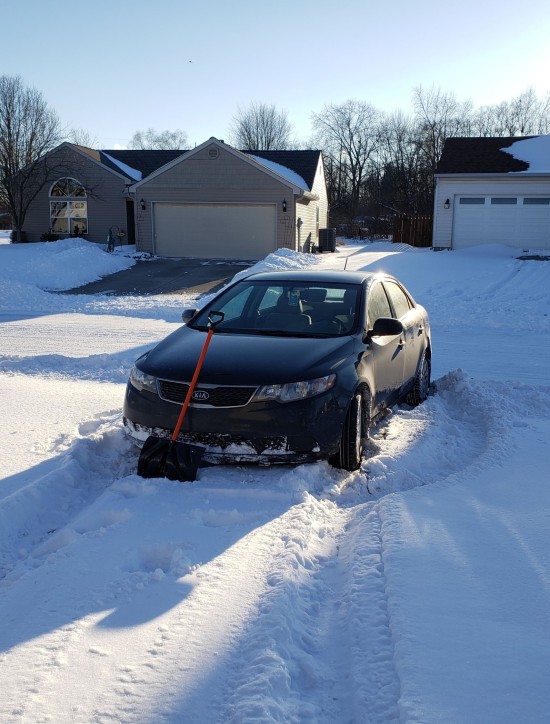 This week the teeming cloud hordes of Old Man Winter barreled across the American skies and bludgeoned entire states and regions into total pandemonium. Blizzards dumped heavy swaths all around as if half the United States were now honorary Minnesotas. Schools and other community activities that had opened their doors to welcome COVID-19 and its carriers reneged and locked their doors. Power grids failed. Water pipes seized up. Numerous utility companies faced wrathful accountability for their shortsightedness, for skimping on precautionary upgrades, and for being smug greed-heads. Homes became inhospitable and even dangerous, forcing families to seek shelter, charity, and survival elsewhere. The turmoil dragged on for hours and days even after the snowfall ceasefire. Millions of internet users distracted themselves by logging onto their devices by candlelight, their batteries down to 15% or less, and channeling their unchecked rage into scathing verbal attacks on the Zodiac Killer. This week was like 2020 all over again, much like all the 2021 weeks that preceded it, but, like, somehow in its own way even 2020-ier.

Me? I got my car stuck at the end of our driveway.

Tuesday morning Anne had warned me, as she always does whenever a TV meteorologist mentions the words “snow” or “freezing temps” or “wear a coat” or “traffic”. She worried about potentially hazardous and lethal road conditions, and about all those other aggressive drivers she doesn’t trust, setting aside how many times she’s ridden by my side while white-knuckled and shrieking sweet panicky alerts in my ear about my own split-second oversights. She reminded me I was more than welcome and able to work-from-home. She invited me to stay cozy here rather than risk contact with the outside world. She and I could spend the day together, avoiding all that wicked winter wonderland together as a loving couple, on the clock, in separate rooms, on separate computers, helping separate clientele. Ah, the blissful modern rat-race romance.

Alas, I remained committed to my routine and ventured out for an extended morning commute, which the nighttime accumulation of six to eight inches of snow had turned into a veritable Indianapolis Iditarod. My usual 25-minute drive along our middling city streets became a 50-minute polite slow-roll down single-lane hallways blanketed on all sides, slick in many spots and abysmally sludgy in others, and sometimes both at once. A few accidents dotted the landscape hither and yon, as is typical for a state that sees snowstorms nearly every year and yet seems to forget collectively how to drive in them. After a while you get used to seeing all those roadside post-collision discussion groups and trying your best not to make eye contact with them lest they jinx you.

Morning rush hour wasn’t great. I’d driven in far worse. I persevered, I did my eight hours’ time in the office alongside an even scanter coworker turnout than usual. The evening drive saw a few roads thawed, blessed by a winning combination of direct sunlight and priority snowplow attention. Not every neighborhood could say the same. Some sections of downtown clearly had more committed coverage than others. Our snowplow workforce is sadly finite and can only plow so fast, and presumably they plow where they’re told to plow. The city blocks they hadn’t reached yet were still nigh impassable, left to choke on the white detritus of those overnight snow tsunamis (snownamis?).

I like to think I navigated the obstacle course with aplomb and restraint, refraining from flagrant displays of impatience or showy daredevil stunts. Other drivers never really applaud those anyway, so why bother trying to regale implacable stunt critics with such feats as if my car and I are doing our joint Snowpiercer impression. No, I behaved myself, stayed mannerly in line, and crawled in lockstep the entire way home in front of and behind others who couldn’t afford auto collisions or insurance fights. So many two-lane roads were down to single lanes, there wasn’t room to weave my way to a pretend Indy 500 victory anyway.

I kept my promise to stay safe the entire way home without incident, barring a couple of intrusive snow drifts that got flattened because I didn’t like the way they looked at me and they had it coming. This time the 25-minute drive took a mere 45 minutes, a slight improvement possibly because many folks were scared of the risk yet really wanted to get home now now now, but in an orderly and undamaged fashion.

Our neighborhood was still buried in snow, but the lane had been uniformly flattened. The dwindling skeleton crew that composes our dwindling homeowners’ association found within themselves the means and funds to summon a truck or two for us, which I was unsure whether or not to expect. Their efforts reduced the roadway texture from “craggy hiking” down to “lunar Sunday stroll”. Any improvement was fine by me.

I approached our driveway only to be reminded that each year the magic of snowplowing comes at a price: all that plowed snow has to go somewhere. The road itself was evened and drivable, but the trucks had crammed all the excess tons of compacted flakes to the roadside and created entire mountain ranges lining everyone’s front yards. Fun for those few kids who still play outside — those haven’t gone extinct, have they? I wouldn’t know — but less fun for adults who wanted to come and go as they pleased. It’s a basic perk of homeownership.

I drive a 2011 Kia Forte. It’s been paid off since 2015. I love not having monthly car payments, and I still appreciate many of its features. Among its most annoying drawbacks: even though it isn’t an electric car or even a hybrid, the whole thing weighs about thirty pounds, even with me in it. The Forte isn’t really in a position to tell other cars or immovable objects who’s boss. It’s quite maneuverable and in a few extremely close calls has pulled off near-Baby Driver levels of dodging. But unlike the ’98 Cavalier I used to own, the Forte is not a battering ram.

A tad irritated with the day’s prolonged travel time and emboldened by my basically perfect results so far, I decided I was not about to blow it in the home stretch. I barreled toward the mini-Rockies that stood between me and my house, determined to go up and over and through and into the winners’ circle, by which I mean the garage. I just had to grit my teeth, push through, don’t stop, eye of the tiger, burning heart and whatnot, and overcome that last hurdle.

And I got jammed up in the middle of the mini-Rockies like they were a trick blanket disguising some white, fluffy La Brea Tar Pits.

Tried to gun forward, spun the tires in place. Threw it in reverse, spun the tires in place. Drive, Reverse, Drive, Reverse, no-go. If it’d been a jeep in Jurassic Park, that’s the exact moment in the movie when a mutant snow-white T-Rex would’ve clamped down and devoured me like a can of congealed cranberry sauce. Thankfully instead it was Anne coming out to greet me with a smile and, to her credit, waiving her right to perform a “told you so” dance right in front of my wedged-in car.

Not that this was a protracted ordeal. Three minutes’ targeted shoveling behind each tire gave me all the runway I needed to back up one more time and Dom Toretto my way through those last forty feet. Then I could officially say, “Honey, I’m home!” But all those long, long minutes of conscientiously slow driving all day long against my inborn speed-freak nature, only to hit a punchline at the end of the wintry journey…it stung my pride more than the cold air stung my exposed skin.

Our hearts and prayers go out to those who’ve suffered far worse this week, whether from weather or the economy or the pandemic or structural neglect or any combination thereof, and dearly hope things are getting better with recovery or deeper help on the way. My own humiliating post-snowfall inconvenience was kind of pathetic in comparison, but hey, at least I didn’t disappoint an entire constituency and try to blame my troubles on my offspring.