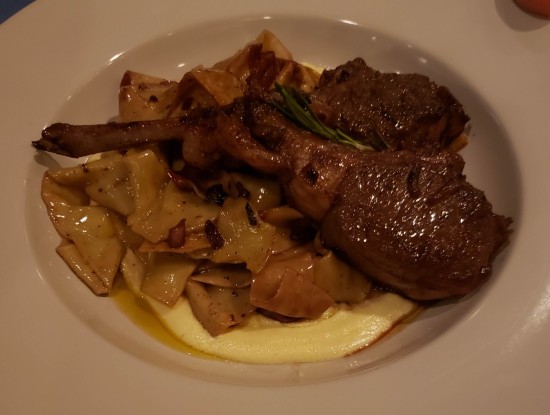 Dinner for Anne at Catellos: the Agnello and Caprino — rack of lamb atop pappardelle in a red wine sauce with shallots and herbs on a bed of goat cream sauce.

Previously on Midlife Crisis Crossover: last fall we shared our tips for supporting local restaurants in person during the never-ending pandemic without a churlish kill-or-be-killed approach. We still don’t dine out too often because COVID-19, but when we do, that listicle’s ten bullet points remain firmly at the forefront of my planning anxieties.

That entry was written during another Devour Indy occasion, a twice-yearly citywide event here in Indianapolis when local restaurateurs — nationwide chains need not apply — offer specially priced prix fixe menus to entice new customers to come sample a few of their wares. My wife Anne and I are fans of the event, but we usually skip the sale items and check out what’s on the main menu. It lets us try places we’ve never been, and it helps them recoup the considerable costs of participation. A few weeks ago, it was that time again. 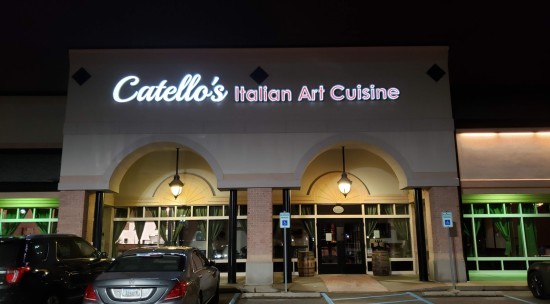 Catello’s Italian Art Cuisine on Indy’s northeast side, near the Castleton area. Their flagship location is farther out in Pendleton.

Italian cuisine is not one of my personal go-to choices. When I managed a year-long diet from July 2004 to July 2005, pasta was among the many former favorites that lost some charm for me when they became The Enemy during that time span. Since then we’ve frequently cooked wheat or whole grain pasta at home, but rare are the times when I have Fazoli’s or Olive Garden in front of me. Every so often, though, Italian fare is an itch that yearns to be scratched because Anne loves her some carbs, and I enjoy the challenge of seeing what else such places offer besides noodles upon noodles drowned in noodle sauce with a side of bread to help weigh the noodles down.

An in-depth search of the Devour Indy roster brought us to our candidate featured here, Catello’s Italian Art Cuisine, opened last November by a chef who moved to Indy from Naples (as in actual Italy) in 2014. It’s not the sort of establishment where we can visit everyday since we’re not food critics or upper-class, but one night’s indulgence was our sincere pleasure. Best of all for me, there’s far more to their fare than spaghetti. 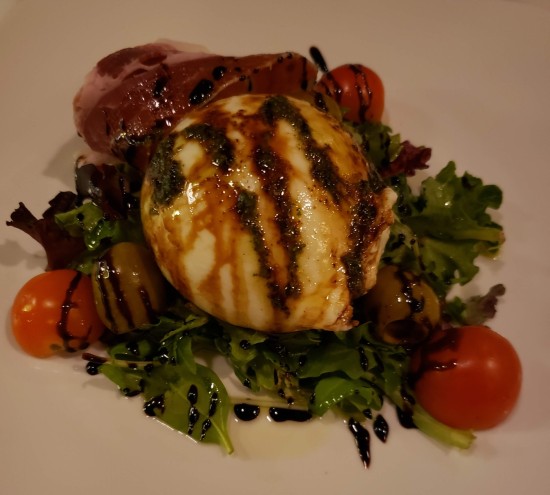 Our appetizer, the Burrata Classic — mozzarella shell on the outside, creamy mozzarella filling inside. Garnished with balsamic, fresh tomato, prosciutto, and olives. A combined bite of cheese, dressing, and green olive was heavenly. And I hate green olives.

Their amenities include a brightly lit deli on the side, which we entered by mistake upon arrival because it was far more visible at night than their unassuming front doors. A kindly staffer guided us to the dining room, and then our lovely night began amid their romantically lit ambience and their well-spaced tables. Another couple sat far across the room from us. While waiting for our entrees, a party of six was seated in the middle at least a good 10-12 feet away, safe enough by distancing standards and yet close enough that we could hear snippets of chitchat about life in the shipping business. Masks were worn all around when appropriate, nary a screaming denier in sight.

Portions were not massive, nor did they need to be. The complimentary bread and aioli were up to par and then some. We declined a second bread basket in case of gigantic entree portions. Catello’s proved not to be that kind of smorgasbord, which was fine by us. We’re in the early stages of middle age when we’re realizing “quality over quantity” isn’t just an aesthetic rule of thumb: it’s practically medical advice. At my age and advancing weight I do not need an entire feedbag full of fettucine Alfredo jammed into my face, or free refills of same, even if it’s at a desperately low price. 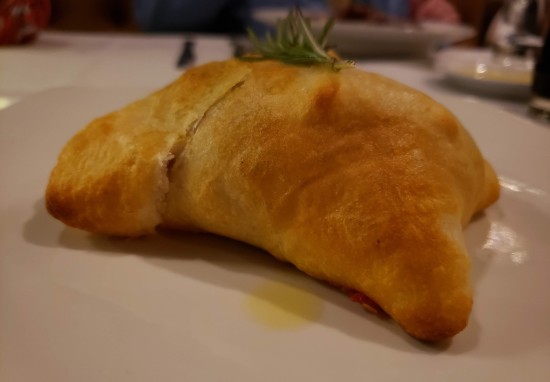 The dish that bowled me over: Filetto al Taleggio. Inside this delicate puff pastry lay Taleggio cheese and an eight-ounce filet mignon. I had no idea Italian food scientists had basically invented a sort of steak donut, but I am absolutely here for it.

Anne and I enjoyed each other’s company as well as our waiter’s. We resisted any urges to whip out our phones and take turns reading aloud the day’s social media discoveries, disappointments, downfalls, and dunks. That activity has helped us pass many a restless night over the past eleven months or more. It shouldn’t be needed to pass every night.

It was nice to spend time with each other, even in a controlled environment, without dwelling on the everyday frustrations of headlines, politics, rampant sins, abject failures, death tolls, petty feuds, schoolyard brawls posing as “government”, or whoever was Twitter’s Main Character of the Day. Just the woman I love and an exquisite meal. And our servers, with whom we possibly shared a mutual hope that none of us would sicken the other. 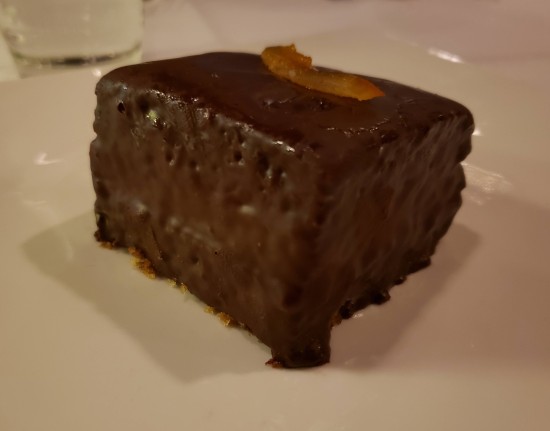 While Anne ended her meal with gelato, I tried their delectable cannoli cake, which fulfills every implied promise and more. Neither sickly sweet nor overindulgent, ’twas the best possible end note.

It’s nights like that, spent apart from devices and nonstop input and treatment of every digital morsel as “need-to-know”, that remind me I don’t always need a feedbag of internet jammed into my face, either. Sometimes it can be nourishing in moderation; more often than not, lately it’s empty calories. Fights upon fights drowned in fight sauce.

If I seems more invisible lately, it’s because I’m bored with the Never Ending Fight Bowls and off searching elsewhere in life to see where God’s hiding all the steak donuts.