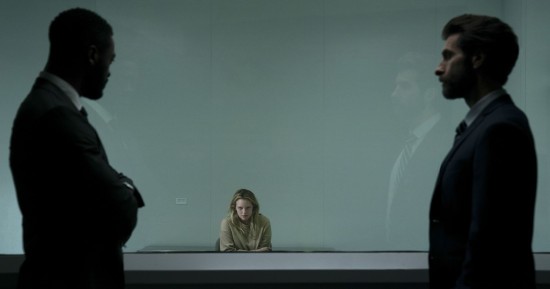 Elisabeth Moss demonstrates the proper distance to sit away from other viewers at the theater.

It’s listing time again! In today’s entertainment consumption sphere, all experiences must be pitted against each other and assigned numeric values that are ultimately arbitrary to anyone except the writer themselves. It’s just this fun thing some of us love doing even though the rules are made up and the points don’t matter. Even when we don’t have much to list thanks to the decline of Western civilization. Every year I compile this list from every film I’ve seen in theaters that year and, well, you can imagine how that went.

Thanks to the pandemic, in 2020 I saw seven films in theaters, a personal worst since at least 1995, maybe even farther back. Of those seven, three were Best Picture nominees officially released in 2019 and therefore disqualified from this list, because I’m an unreasonable stickler about dates. Ranking those three for the record:

Of the remaining four contenders that I saw in theaters, we had one super-hero film, one animated film, one reboot, and one original story. In past installments this paragraph was always much longer and stat-filled, but…um. You know.

Here’s the rundown of what I didn’t miss in theaters in 2020 before it became in my best personal interest to miss nearly everything. Links to past reviews and thoughts are provided for historical reference.

1. The Invisible Man. Elisabeth Moss wins the year as the vengeful rage of every tyrannized woman ever in Leigh Whannell’s sleek, sharp reincarnation of the second-tier Universal Monster as a more grounded but no less unsettling 21st-century monster, a tech-bro who turns savage when he can’t have his way. In this nightmare he lurks in shadows, storms, and open door frames where he thinks he can indulge himself without consequences, coasting on the sense of entitlement that too often inflates the ego of trendsetters, but the ultimate irony is that once you get past the stealth-ninja strikes and the surprise ghost-weapons, at his core he’s nothing and no one. An already great theatrical experience — where we gasped together as an audience at That One Scene — held up on a premium-cable second viewing, where I could admire the cat-and-mouse dance between Our Villain and the teasing camera that may or may not track his movements, and enjoy an encore of cheering on Moss as she emerges from her corner and makes him truly see her.

2. Birds of Prey and the Fantabulous Emancipation of One Harley Quinn. I realize they changed the name for the home video release, but if I have to call Edge of Tomorrow by its lousy assigned name rather than the clever tagline from its trailer, then I’m not calling this Harley Quinn: Birds of Prey, either. Its self-inflicted marketing wounds aside, DC’s desperate wish to make their own self-aware anarchic romp like Deadpool was among their film division’s better ideas to date. I’m still stodgy on the idea of stuffing F-bomb pellets in the cheeks of all-ages Big Two characters, but past the bawdy and the bloody, Harley’s escapades among Gotham’s warring factions and its new wave of (anti)heroes are brash and bouncy and boisterous and far less compromised a platform for launching her than Suicide Squad was.

See, Ian and Barley have the right idea: the great outdoors is safer! I couldn’t convince my family to give our local drive-in a try, though.

3. Onward. “That was in 2020?” asked my son the other day when I brought up Pixar’s last theatrical joint, and the last film we saw before the lockdowns began. Yes, it was a mere ten months ago but feels like eighty-four years since that time we watched scrappy youngster Tom Holland and former star Chris Pratt drive around in a super awesome ’70s-painted van on a road-trip fantasy quest with their dad’s walking groin. Their mostly harmless capering encourages viewers to lower their expectations for these affairs, an okay reminder that not every fantasy setting needs to be a $300 million Peter Jackson event spectacle and not every Pixar film needs to be an emotionally devastating, award-hoarding Toy Story sequel chasing that gleaming 100% notch on the Tomatometer.

Isolation is good, and as the esteemed Mr. Washington demonstrates here, PPE can be useful, too. Why not bring gloves to the theater? They’re legal!

4. Tenet. How topsy-turvy is it when you can declare without irony that Christopher Nolan directed the Year’s Worst Film if you reduce the sampling pool this drastically? He’s more than welcome to write a 100,000-word treatise on why it was actually a good thing to write a screenplay that’s 95% convoluted fake science exposition, then take every possible step as a director to render it incomprehensible on the first, most expensive viewing. If a film is designed to “get better every time you see it”, that means the first showing will be your worst experience with it. I didn’t go to the trouble of devising my very own four-step method for safely going to theaters during a pandemic, which meant waiting three weeks and paying rather extra for a deserted Dolby Cinema evening showing, just to experience a new Nolan film at its absolute worst.

I mean, Armageddon may have been one of the loudest, most chaotic blockbuster flicks ever, but at least the audience could tell what the heck was going on, judge it impartially ludicrous, and laugh at the correct moments of unintentional awfulness instead of Wiki’ing them later. I can confirm from personal experience Tenet on a Redbox Blu-ray is not the same experience. It’s smaller and there are subtitles and it turns our first try into basically a 2½-hour spoiler-filled trailer for it, but it was a less frustrating evening, a buck-fifty well spent. Even less than that, actually — I had a Redbox discount offer. And I didn’t have to watch it with a mask on in a room whose thermostat seemed cranked up much higher than it used to be and without the distracting background roar of an expensive air filtration system.

…and that was my 2020 at the movies. Shortest annual list ever. Now if we’re talking about the 2020 films I caught at home, for once that’s a longer list. Much longer.