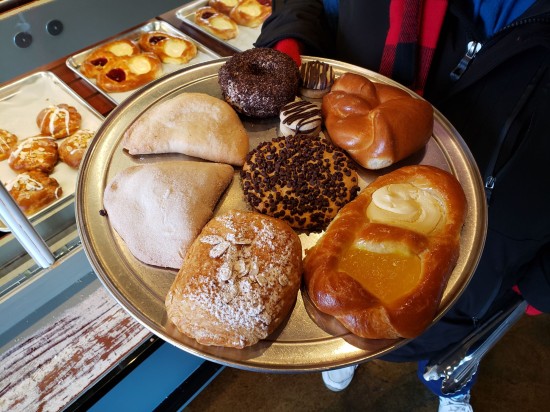 These scrumptious baked goods are actually the end of our story, but when you invoke the word “Valentine”, no one wants to put off the sugar till later.

This year our Valentine’s Day was a wash. Anne and I both had to work, which was time well spent in the sense that more work means less debt. The evening was equally unromantic. While I tended to a recurring family responsibility, Anne spent those same hours errand-running. Sacrificing that time frame meant far fewer interruptions in the rest of our weekend.

United at last at the end of the day, we exchanged gifts and red-tinged, heart-covered cards with jokes on them. Then we hurried up and fell asleep because we’re older now and we had a date to look forward to in the morning.

As some families celebrate Christmas not on the day of, so went Cupid’s cutesy custom for us.

Massachusetts Avenue in downtown Indianapolis is one of those prime gathering places for snappy dressers who enjoy high-end dinners, trendy boutiques, and a classy nightlife steeped in dignified alcohols. Every few months an upscale Mass Ave restaurant goes out of business, but the organic traces left unscoured from the crevices of its abandoned shell serve as the flowerbed from which the next aspiring bistro springs forth. Mass Ave is a domeless terrarium of skilled chefs and magazine-photo living.

After 5 p.m. the sidewalks are crowded with wanderers and cruisers and bar crawlers, and all the parking spaces are full because Indy’s mass-transit game is weak and the neighborhood association believes parking garages are déclassé eyesores. But at 8 a.m. on a Saturday, early birds can park anywhere their heart desires, plant a flag and claim the land as their own for a few hours without opposition until the hangover survivors emerge from hiding, don their designer sunglasses, and begin their party life cycle anew. 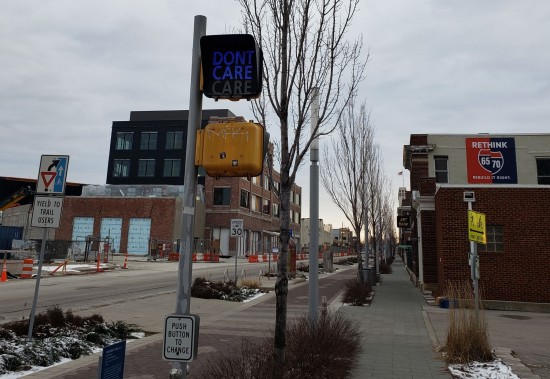 Mass Ave has art everywhere you look, from murals to protests to subtle flourishes embedded in the cityscape.

Anne and I visit the area on occasion for a change of pace and a sample of creative cuisine. This morning our never-ending search for Places We Haven’t Tried led us to the Love Handle, whose name all but screamed “VALENTINE”. This artisan shoppe migrated from Milwaukee to Indy in 2015, moved one more time to Mass Ave, and recently celebrated their second anniversary in their current hideaway. A rotating menu of brunch and lunch items offers locally farmed ingredients, multiple meat options, select pastries, and some alcohols because the majority loves those things. 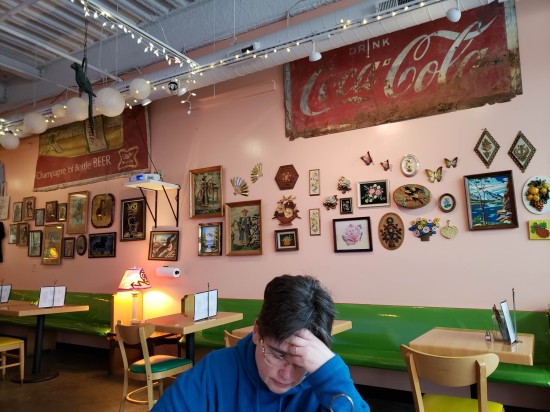 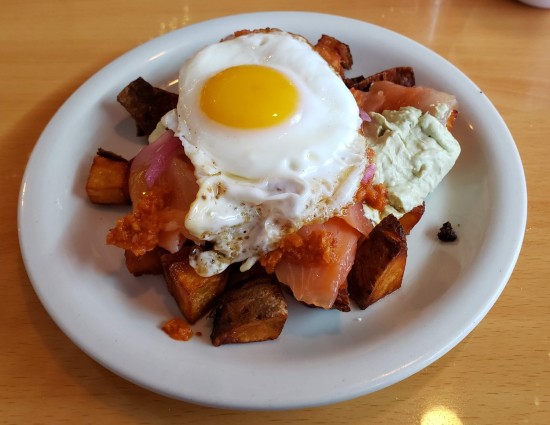 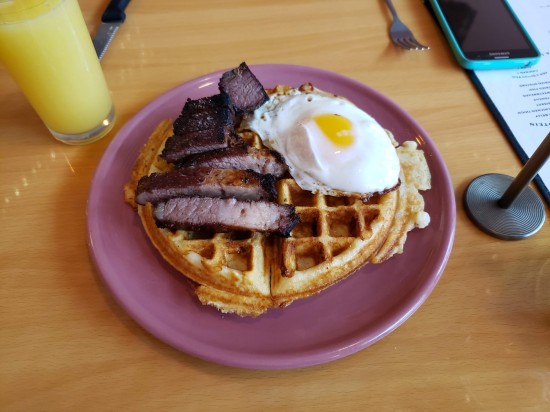 Anne’s breakfast of beef brisket and waffles, served with a side of hot honey ‘n’ miso lime butter, and topped with a fried egg.

They do love their fried eggs. I share this love, though dishes with fried eggs on top tend to look alike and make for repetitive photography. They visually accentuate the fried egg as the star of the dish at the expense of all the delightful flavors underneath. The cured salmon in particular was a revelation on my plate. The last few times I’ve ordered salmon at other places, especially steakhouses, it’s been coming out bland and dried out from overcooking. It’s a relief to know God didn’t create salmon with the intent to encourage Adam and Eve to turn it into pink drywall. The Love Handle handled this salmon with love.

We enjoyed our whimsical dishes. We enjoyed each other’s company. We recapped highlights from our respective internet feeds. We each shared memories and witticisms and opinions and tirades for an exclusive audience, our number one follower. Such is 21st-century middle-age love.

By the time we bade the Love Handle adieu, no other Mass Ave businesses were open yet. Window shopping is more fun when you can open the occasional door. Brisk walks are less fun when wintertime bitterness has clocked in for duty weeks late. We speed-walked back to the car, drove back to our side of town, and digressed one last time before retreating to the safety and screens of home.

Not far from our house is an artisan bakery with pastries called Artisan Bakery and Pastries. The proud house specialty is Latino wares, sugar and other carbs lovingly wrapped in shapes and textures ranging from pleasant to heavenly. That’s today’s haul up there in our lead photo, an assortment that includes empanadas, cookies, a donut, a double danish, and more. In the past we’ve sampled almohadas, banderillas, yo-yos, cream puffs, and then some. They stock up on conchas above all else. They also bake exquisite cakes to order. Now we just need someone to invite us to a party so we’ll have a selfless excuse to buy one.

Also worth mentioning: the grand total price of that entire plate of goodies was less than what we paid for either breakfast dish alone.

To local tastemakers our side of town may seem totally uncool, much like middle-age wedded bliss, but it has its perks.