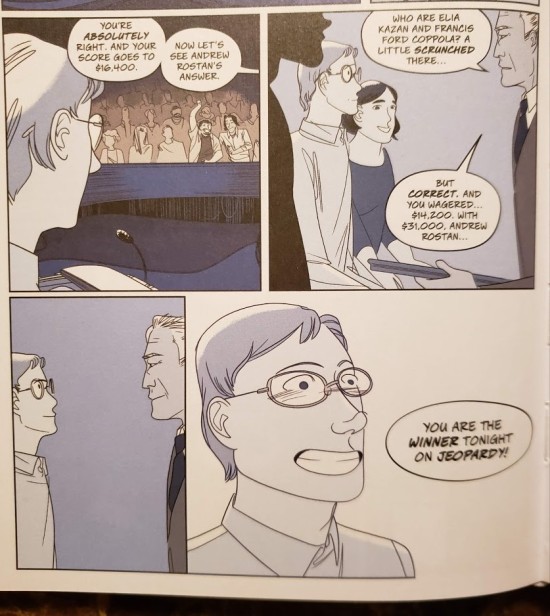 The thrill of victory in front of a celebrity and an audience of millions. Art by Kate Kasenow, Jenna Ayoub with Ilara Catalani, and Laura Langston.

6. Richard Price, Lush Life. Between his contributions to The Wire and his outstanding HBO miniseries The Night Of, I’ve seen more of Price’s T works than his acclaimed novels. I’m slowly trying to rectify that, having read Clockers and The Whites in recent times, but I have far to go. 2008’s Lush Life is a vivid snapshot of Manhattan’s Lower East Side as a nexus of Manhattan realities whose disparities clash when an armed robbery goes murderously wrong. Gentrification and dilapidation collide in the reality where the artists who fancy themselves future entertainment visionaries infringe on the turf of the less well-to-do just trying to make a living. We’ve been in the vicinity a couple of times on past trips, but Price reveals far deeper details than than we witnessed on our short tourists’ walkabouts. (If anything, it reminded me more of our experiences in Baltimore, Hartford, and the most uncomfortable city we’ve visited to date, New Orleans.)

7. Andrew J. Rostan and Kate Kasenow, Form of a Question. A candid graphic-novel memoir by a then-twentysomething Jeopardy! champion who found himself intoxicated by the adrenaline rush of multiple game-show victories, but who eventually learned one cannot live by book smarts alone. Whereas Ken Jennings’ Brainiac (among the show’s definitive behind-the-scenes recounts) was written from the perspective of a family man whose identity was essentially in place before he rose to trivia superstardom, Rostan during his glory days was younger and had far more to learn about how to associate with people instead of merely awaiting their quizzing and their awe. It’s a deeply personal tale but should resonate with anyone who found young-adulthood far more vexing than their school years ever were.

8. Shaun Manning and Anna Wiesczyk, Interesting Drug. A dispirited college dropout is accosted by a clearly skeevy-looking dude who tells him he’ll one day invent a time-travel drug and helps accelerate his inventing timeline. What could possibly go wrong besides underlying selfish motivations ruining everything? Or the part where buyers get hooked not on the drug itself, but on nostalgia and on watching their own past in reruns? A new take on an old SF subgenre finds a twist or two, but gets obscured at turns because the two main characters seem to have shopped at the same exotic hair salon and are frequently hard to tell apart at a glance. On the bright side, yes, the eponymous Morrissey single works its way into a cameo.

9. Markisan Naso and Jason Muhr, Voracious, vol. 2: Feeding Time. Previously on Voracious vol. 1, a down-and-out chef inherits a time machine he uses to go back in time, hunt dinosaurs, bring their flesh back to the present, and make gourmet dishes out of them at his restaurant. The first arc began humorously and innocently enough, but Act Two takes a dark turn when we learn Our Hero’s expeditions have been wrecking another timeline in a devastating manner for which “butterfly effect” is an understatement. The timeline war echoes the middle seasons of Fringe and, in its most masterful trick, convinces the reader that an alternate reality of hard-boiled dinosaur detectives can be conveyed with straight faces and wounded hearts. That, if I might overuse a phrase, escalated quickly.

10. Daniel Kibblesmith and Derek Charm, Valiant High. For a while the folks at Valiant Comics had a promising universe going with titles such as X-O Manowar, Archer & Armstrong, and the best of the bunch, the young, disillusioned yet pessimistically idealistic rebels of Harbinger. I gave up on their universe when their publishing strategies changed and they went all-crossovers-all-the-time. This all-ages gem reimagines all their characters as students or faculty at the same superhero high school, with no pretense at continuity and no crossing over into twelve other titles. The results are Archie-fied in all the most complimentary ways, filtered through the modern lens of a razor-witted four-time Emmy™ nominee and the current artist of Marvel’s Unbeatable Squirrel Girl. I’ve never cared about the Emmys in my life, but I care quite a bit more about this book. If only it weren’t a one-time deviation from the company’s present norm. 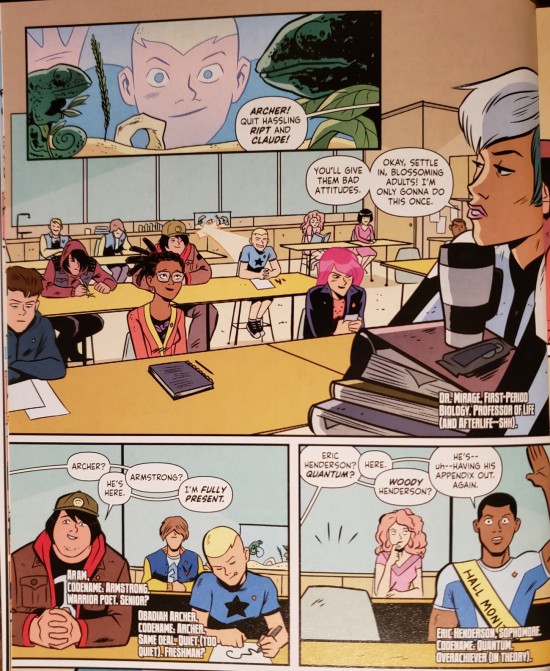 Besides Christopher Priest, Kibblesmith is the only writer I trust with Quantum and Woody. Art by Derek Charm and David Baron.