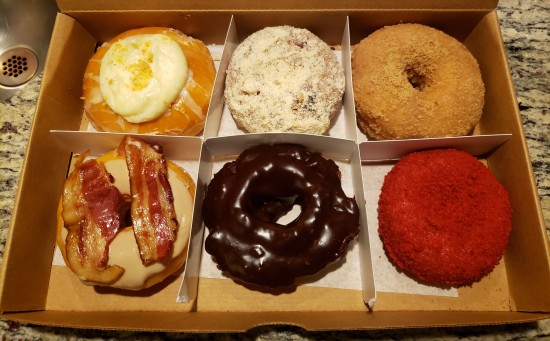 Previously on Midlife Crisis Crossover: Anne and I attended the tenth annual C2E2 entertainment convention a few miles from downtown Chicago. When time permitted before and after the show, once again we wandered the Windy City and took photos, preferably of places and things we didn’t already see on our last several Chicago comic cons. Y’all know me — any excuse for a travel photo gallery.

Our old nemesis the Dan Ryan Expressway was slightly less gridlocked than usual on Friday morning. You can actually see some pavement between the cars. 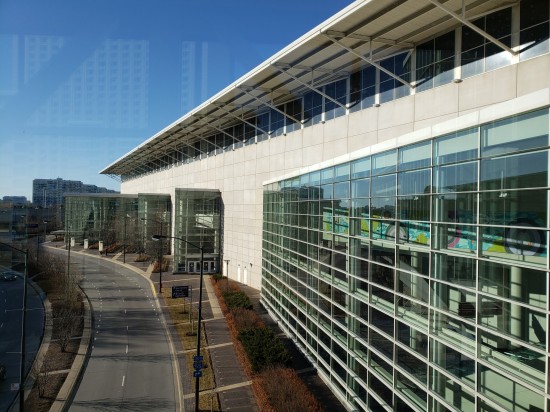 Once again C2E2 was held in McCormick Place’s South Building. In the photo is their West Building, where Star Wars Celebration Chicago will kick off April 11th for a 5-day extravaganza of
rare exclusives, corporate-approved overcharging, and fans who loved or hated The Last Jedi choosing sides in a Hatfields-vs-McCoys pointless live shootout. 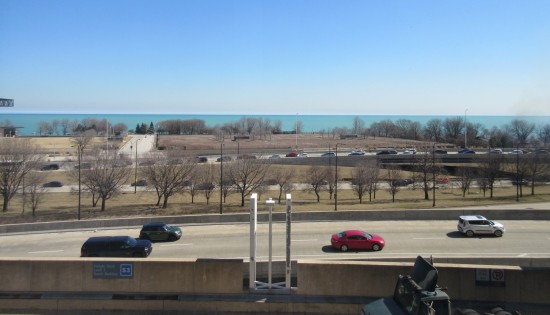 The view of Lake Michigan from the fourth floor. On Saturday there were trees or similar things on fire out there along the coast, which we stared at but didn’t think to photograph.

The view from our hotel up on the Magnificent Mile. We’re major buzzkills, anathema to most parties, and almost never stay at hotels next door to cons. 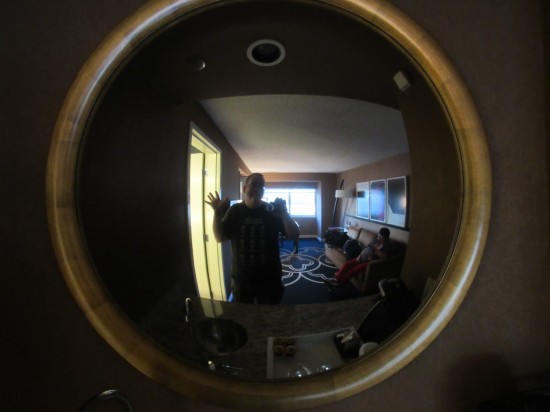 Our hotel came with a fun-house mirror I could use to recreate at least half of Yorgos’ Lanthimos’ The Favourite.

Late Friday night, Anne and I ambled toward Water Tower Place in search of grub. Across the street was upper-class neon shopping. Not our thing, but their lights were pretty.

Friday dinner was at M Burger, decent beef but lousy service. For dessert I tried Scooped Cookie Dough Bar, which serves exactly what the name says. I made the mistake of trying their Mexican Hot Chocolate cookie dough without a drink. I took three bites and saved the rest till we returned to the hotel and I paired it with a cup of Keurig decaf and all the free water in our sink.

After two straight days of C2E2 and a Chicago parking garage incident I don’t feel like posting about yet, we spent Saturday night at Giordano’s, which gave us a few hours to unwind because that’s how their service always goes. Artichoke fritters with lemon basil aioli were a nice appetizer while we waited and waited.

Sunday morning we walked over to Do-Rite Donuts and noticed Chicago keeps their Christmas decorations up through March.

Ah, yes, the traditional city sight of reindeer in springtime. 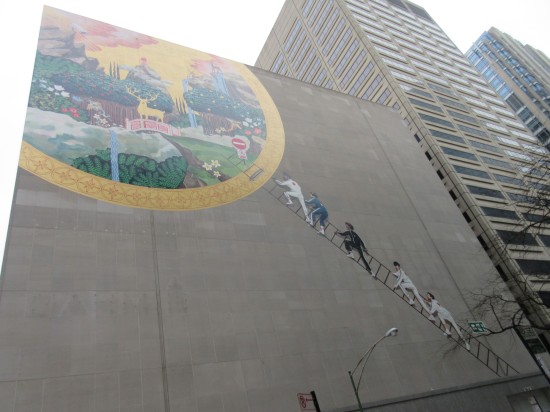 Brand new to the Magnificent Mile this year: a 9-story mural by Spanish artist Ignasi Monreal.

And in the midst of downtown life and the gently indifferent skyscrapers, C2E2 waves hi to us one last time before we head home.

…and slightly over a week from now we’ll be back in Chicago once more to revisit a show we haven’t attended since 2005. Updates and new Chicago visuals as they occur!