Come have a seat with Eleanor and Franklin in happier times!

I know what some of you are thinking: of the nine American Presidents whose graves we visited on our week-long scenic tour, isn’t it about time we got to a President who had more than twelve fans? First of all, the city of Buffalo thinks people like you should stop being so mean to Millard Fillmore. Second of all, yes. Yes, it is.

About an hour south of the modest Martin Van Buren experience, on the same highway and therefore really easy to map a direct route to, was the town of Hyde Park, hometown of the legendary Franklin Delano Roosevelt. If you had better history teachers than I did growing up, chances are you know at least as much about the onetime New York governor, if not more than I do — the childhood polio, the downplayed wheelchair, the Fireside Chats, the New Deal, the day Pearl Harbor “awakened a sleeping giant”, World War II in general except the part with the atomic bombing, and the trivia question “Which U.S. President served the most terms and inspired a Constitutional amendment to secure that world record?” Also part of his story was outspoken civil rights activist Eleanor Roosevelt, no mere Concerned Wife.

Their estate can now be visited today as the Home of Franklin D. Roosevelt National Historic Park Site and the Eleanor Roosevelt National Historic Park Site, two separate acreages two miles apart, to where they retreated from the world when other affairs didn’t keep them busy. Eleanor’s place is to the east and contains Val-Kill Cottage, which they used for entertaining family and friends. After FDR’s passing in 1944 it became Eleanor’s full-time home. Due to a pressing afternoon appointment we didn’t have time for the full tour, but Anne at least wanted to pay a visit. 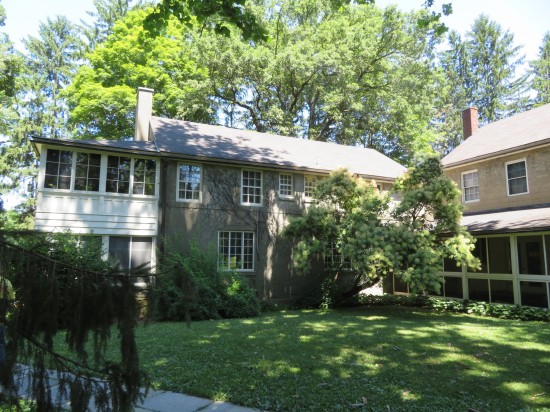 Val-Kill Cottage. We only got as far inside as the gift shop.

The adjacent Val-Kill Pond and creek were lovely on this summer day.

Our focus was turned more to FDR’s half of the estate. It was larger and contained more multitudes, including some sort of unexpected local festival with tables, tents, and music. We saw no instructive signs cluing us in as to whether or not we could approach, so we limited ourselves to the overtly Presidential highlights of the grounds.

A selection of art can be found around the various pathways, including FDR’s bust.

Across the way, a Winston Churchill bust keeps the FDR bust company.

Tangential contemporary pieces include these figures made from the Berlin Wall. The surrounding wall section now stands in Fulton, MO.

A selection of gardens still tended to this day.

The Roosevelts’ coach house, which I guess is what the upper class called their garages.

At the center of the rose garden was object #4 of our 9-object quest, the couple’s shared gravesite. 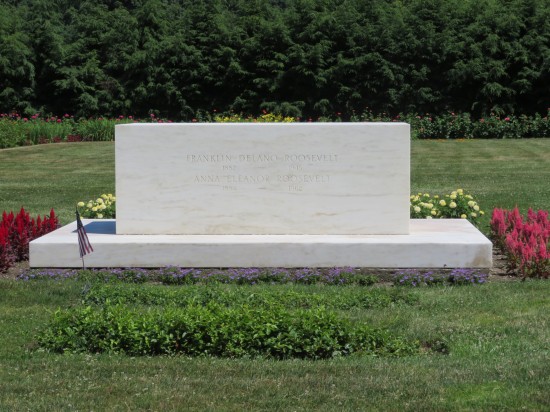 Beyond the mandatory Visitors Center and main gift shop, the bulk of our Hyde Park experience was inside the walls of the FDR Presidential Library and Museum, whose contents far exceeded expectations.

The area certainly isn’t lacking for Roosevelt busts. We found more inside, too.