DISCLAIMER: Not a working spacecraft yet.

Our first venture into the state of Iowa left a lot to be desired, but it was a milestone in our travels: the first time we ever visited the birthplace of a famous personality before they were born.

Our escape route from Omaha’s Henry Doorly Zoo was shrouded in thunderclouds, and made all the more Byzantine by assorted College World Series cordons and detours. Just before I got my bearing and confirmed which way our necessary exit ramp was, we saw one lunch option too late to take advantage. Next time we’re in town, maybe.

Come on down to where beauty fed the beast!

To our sorrow, lunch instead was several miles east in Madison at a far less apropos KFC whose ‘C’ stood for “C-minus”. We left the zoo far later than I’d preferred in the first place, but all the traffic runarounds ate up the remnants of spare time I’d allowed in my head and, I was painfully aware, had pushed back our arrival time at our next stop. To make matters even more discouraging, the same rain that made parts of the zoo undesirable also dogged our heels pretty much through the entirety of Iowa. This, of course, was on top of far too many miles’ worth of road construction that would’ve slowed our progress even if the day had been gloriously sunny. For added measure, fuel to the fire, insult to injury, salt in the wound, misery upon misery, and other metaphors that just won’t mix, somewhere past Cedar Rapids all cars came to a dead stop frequently because portions of I-80 were flooded. Several inches of accumulation had to be traversed with the kind of sensible trepidation I find incompatible with my normal style of driving. 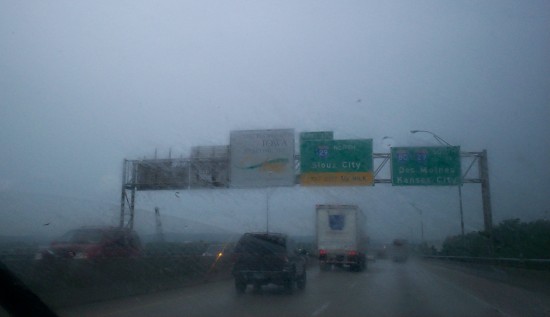 Not our best day.

It was 4:30 p.m. or so when the three of us began to discuss the possibility that the second half of our day may have just been officially ruined and that we might be better off heading straight to the hotel and surrendering to failure and hotel-room ennui. We’re usually tired and rundown by this point in the vacation anyway, but this potential denial of tourism privileges made our already shrouded ambience even darker.

We spent another hour in a mutual funk until we all slowly came to the same realization: we’re not likely to make frequent return trips to Iowa. At this point we didn’t care if we ever saw Iowa again. As far as we were concerned, Iowa and its flood-plain highways and its endless futile construction and its antisocial weather would not keep us from our chosen destination.

Iowa still had one thing that we wanted to see. That we had to see. That would probably never approach within fifty miles for the rest of our lives. That our geek cred demanded we see, and see it NOW, even if every business or storefront was closed for the night by the time we arrived.

Thus sometime after 6 p.m. we detoured off the interstate, took a lonely highway a dozen miles south, and veered off into the tiny town of Riverside, Iowa.

It’s the little touches that tell you this community isn’t just six farms and a Dairy Barn.

Riverside is the kind of town bisected by a medium-sized highway that can carry you through its entirety in three minutes flat. A few decades ago, someone in town turned on a TV, found out that the good Captain James Tiberius Kirk, legendary hero of TV’s Star Trek and hapless victim of Star Trek Generations, was written as a native of Iowa. That same genius asked the suits at Paramount for permission to adopt him as a native son, in much the same way that our friends in Metropolis, Illinois, had co-opted Superman as one of their own. Like Metropolis, they hold a convention each June in honor of their pop-culture superstar. Like Metropolis, they have a large casino down the street to pass the time between cons.

We parked in front of the Chamber of Commerce, long closed by the time we showed up. Anne chatted up a teenage couple sitting outside the local ice cream shop (probably also closed) and interrogated them for the information we needed. First of all, a storm had blown down their pride-and-joy Enterprise earlier that week, so it was out for repairs. Secondly, we’d driven past the right spot at least three times.

On the outside, this Riverside beauty salon (also closed) looked perfectly normal and unsuited to our needs, both recreational and tonsorial.

I’m not sure how long they’ve been closed. For all we know, this might be a hollow facade.

Then we took a step back for a closer look. The clues revealed themselves.

We walked through the salon’s side yard and around back. We found what all the fuss was about. A combination of TV lore and local head-canon pegs this very patch of ground as the place where Captain Kirk will one day spend his childhood. 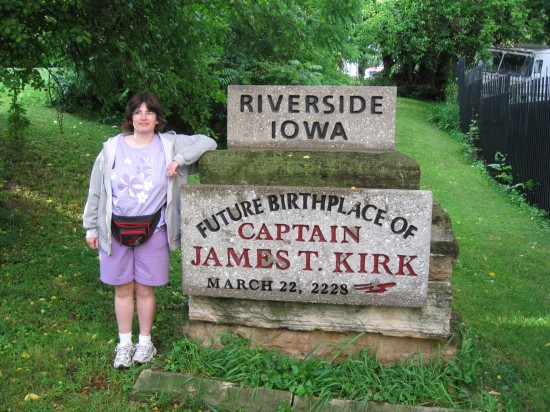 Solid confirmation that we live in the original timeline before J.J. Abrams meddled with Trek history.

The marker is unguarded and un-monetized — no ticket booth, no foreboding fencing, no merchandise booth, and, most crucially, no “CLOSED” sign. We appreciated the sight, though there wasn’t much to it beyond what you see there. If we’d had a Frisbee and a radio, I suppose we could’ve spent some quality time bothering the neighbors.

On our way out of town, we stopped in front of the Riverside Historical Society HQ. Their sign said “CLOSED” but their proud display shuttle (see lead photo) had somehow escaped our notice on the way in. It needed some light repair work, but who cared. I had to salute the ingenuity and dedication required to build an entire shuttlecraft using only the TV show and its expanded universe for reference.

I also had to salute the nice lady who saw us outside gawking, unlocked the front door, and let us in. She’d been there after hours to do some necessary remodeling work and saw no harm in having us inside as guests for a bit. 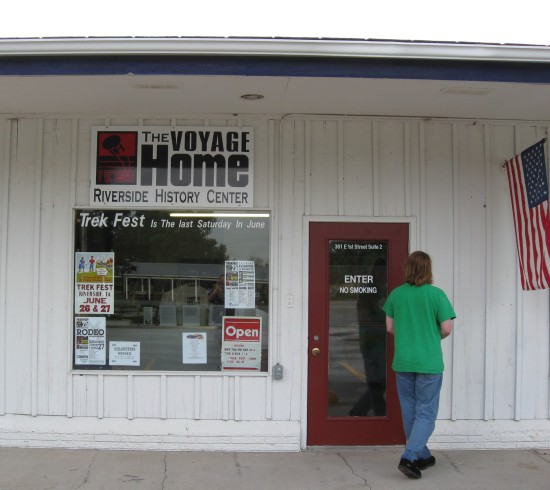 Sadly we’d arrived the week before Trekfest 2009 and had to decline our RSVP.

Our gracious host invited us to peruse the displays and descriptions of the long, detailed history of Riverside, as well as their Trek collection. Beyond their proud legacy of townspeople who died fighting in major wars, Riverside’s other great moment was its costarring role in the William Shatner reality-TV stunt Invasion Iowa. I haven’t seen it and am therefore unqualified to comment on its controversial contents or results beyond what I’ve heard secondhand, but I get the impression that what was conceived as a glorified extended episode of TV’s Bloopers and Practical Jokes became something a little more sweet and meaningful by the time everyone ceased fire.

I have no idea whether this sign was made before or after that production. Our tour guide seemed neither embarrassed nor ashamed. She had nothing but kind things to say about good ol’ Bill. 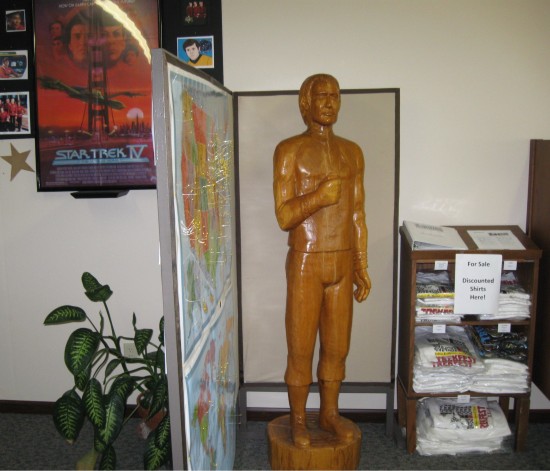 Posters, animation cels, TrekFest shirts, and — we think — a statue of Khan. 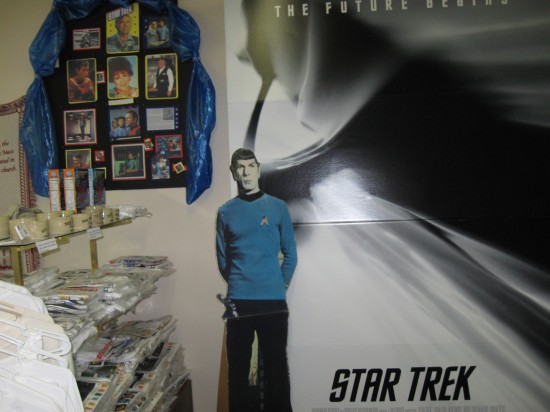 Young Spock had no idea what would become of his life and timeline when Abrams’ overhaul hit theaters in May 2009.

Naturally they had Trek merchandise on sale, arranged in no particular order. They had a couple of items promoting Invasion Iowa, some leftover souvenirs from previous TrekFests, and — funniest thing of all as far as Anne was concerned — hats called “Shatz”. It was apparently a hat designed in honor of Shatner himself. We weren’t inclined to invest $20 in this keepsake and we somehow neglected to photograph one. They were in the beret family, but…different from a beret? In ways? If necessity is the mother of invention, sometimes opportunity is its surrogate.

1. Glimpses of “Shatz” later surfaced online and proved we weren’t making them up.

2. Invasion Iowa first aired on SpikeTV in 2005 and was briefly revived on Comedy Central in 2007. We just learned last week SpikeTV was recently rebranded as the Paramount Network. Although the show didn’t leave a huge mark, its creators Rhett Reese and Paul Warnick went on to bigger things. You might remember them from co-writing such films as Deadpool and Deadpool 2.]