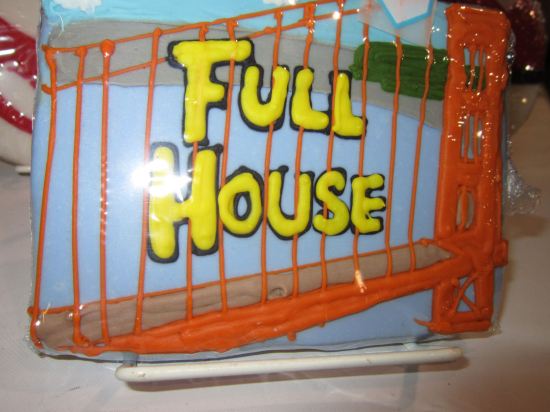 Baked goodie courtesy of the upstanding citizens at Max & Benny’s in Northbrook, IL.

If you were of a certain age in the ’90s, you watched Full House the sitcom on ABC’s TGIF. You dreamed of Full House: the Reunion Special. You binged on Netflix’s Fuller House, the sequel. And if you attended Wizard World Chicago 2016, you could eat Full House: the cookie! If the studio has their way, you’ll just never quit Full House for the rest of your life!

At every convention my wife and I attend, we’re bombarded on all sides by dealers and collectors trying to convince us to buy their new or used merchandise because it contains familiar faces and images, trying to jack into our childhood memories via colorful collectible Pavlovian tokens not unlike the above cookie, which would make a fine Golden Gate Bridge road-trip treat if you deleted that obtrusive corporate logo.

Merchandise is the bait, and our own nostalgia is meant to be the fishing line, reeling ourselves in to be netted and financially filleted.

Super-sized reproduction of Herb Trimpe and John Romita’s cover to Incredible Hulk #181 near the entrance to Cincinnati Comic Expo 2016, reminding you to think comics, buy comics, and please don’t leave unless you’re carrying at least six pounds of old comics in your bag.

We’re at an age where we no longer have the same old reflex responses to the same old prompts. Our early convention experiences saw us immersing ourselves in geek culture, wall-to-wall sensory overload from thousands upon thousands of comics, books, toys, costumes, knickknacks, DVDs, tapes, and other fanciful objects starring or rooting for the heroes and villains from our favorite fictional universes. Frequent overexposure in such wide-scale specialty-consumer playgrounds eventually begets a tolerance, when bedazzlement becomes expectation and what was shocking and awesome becomes status-quo interior decoration. In short, we’re so used to it that we utter “WHOA” a lot less often than we used to, and consequently have become slower on the draw with our wallets and our cameras alike.

At Indiana Comic Con 2016, Galactus reminds all who enter that if they really loved Jack Kirby, they’d go buy lots of back issues and reprints with his art in them. Or you can be reminded of the Fantastic Four instead, but that happens less often to a lot of fans nowadays.

I mean, sure, we still buy stuff, but the older you get, the more you accumulate, and the more room you need to store all your coveted treasures and junk. Some folks don’t mind moving into larger houses, building new sheds in the backyard, renting extra space from nearby storage facilities, or filling up their garage with boxes while their cars rot outside in the elements, thus nullifying the entire point of owning a garage in the first place. Sooner or later you have to draw a line on the amount of square footage you own or rent and say to yourself and to all these dealers, “I CAN’T TAKE ANYMORE!” No matter how intense your flashbacks are to your favorite episodes or issues, no matter how hard your inner child pouts and kicks and screams, you have to learn the self-control and the backbone to tell yourself no more. 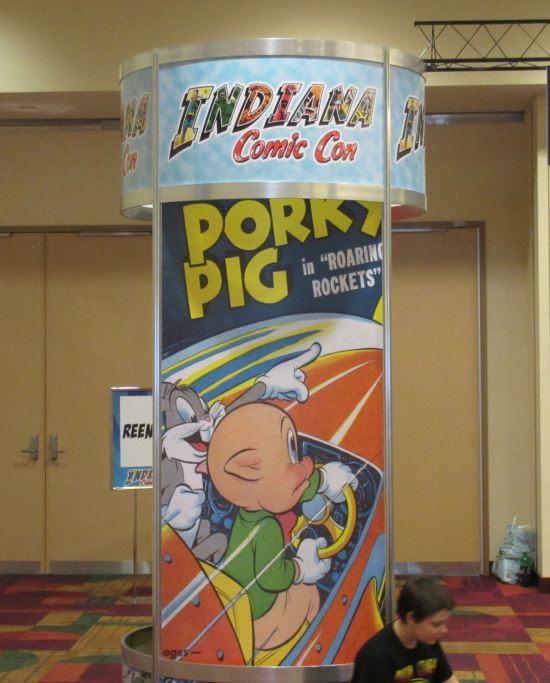 Remember when you were five and they reran Looney Tunes cartoons on Saturday mornings or weekend afternoons? Porky Pig sure does! And he hopes you haven’t forgotten him or your cash!

I keep my nostalgia low-key nowadays, and get resentful when I think someone’s trying too obviously to pluck that particular heartstring without any other substantial reasons to care why they’re parading old-school stuff right at me. If it’s a really creative use of an intellectual property that provoke a deeper response than simply “Yes, I remember that person, place, thing, product, good, or service,” that’s cool. I’ll take a look.

Also worth noting: here in the 21st century, despite all the reboots and relaunches and protracted sequels and expanded extended extruded extraneous universes whose copyrights will never be allowed to expire, believe it or not we actually see new characters, worlds, and ideas popping up on occasion and converting us into their fans. We only have so much room in our heads for all these milieus, so sometimes that means we let go of other aging universes and let them fade into the distance behind us while we move on to greener, less crowded worlds with different perspectives, timelier attributes, and fresher takes on the moral and spiritual themes that resonate with us most in our respective walks today.

Nothing personal. It’s not you, it’s us. We’ve grown, but you haven’t changed and your owners are so very proud of that.

So yeah, I remember that face, and that face, and that one, and so on. We’ll let the younger generations pick up our grand tradition of stopping and staring at every scintillating sight and exclaiming to each other, “WOW, I REMEMBER THAT! SHUT UP AND TAKE MY MONEY!” while we keep on walking. 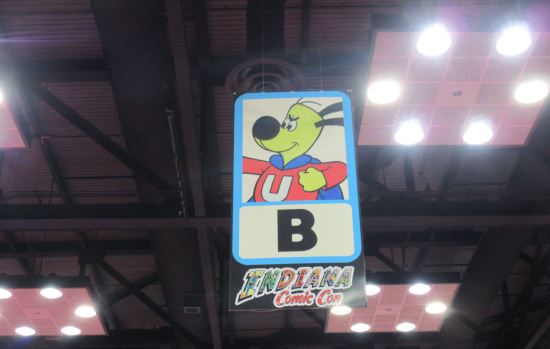