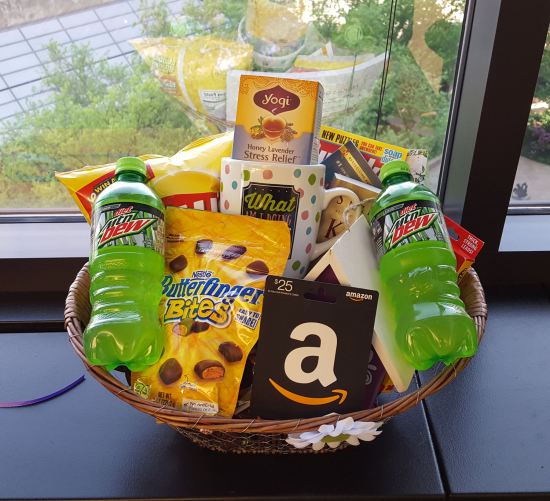 For fifteen years my mom and I worked at the same company in different departments. She retired May 31st after nearly fifty years in the rat race. This was the gift basket her coworkers assembled to help kick off her next era and keep her busy with creature comforts for the short term till she gets settled into a new daily groove. At least one of these items is outside her bailiwick, but such special occasions aren’t the right moment for nitpicking. I appreciate that they took to heart most of the ideas I gave them. Maybe she’ll surprise me and give those untested things a try. Or maybe she’ll hang on to them till Christmas and then hand them off to me or my wife. Whatever works for her.

We threw a lunchtime pitch-in for the yay-retirement opening act, featuring the last round of my critically acclaimed Betty Crocker brownies that she’ll ever get paid to eat. The standard, official retirement party came later in the afternoon, kept small per her wishes — just her immediate coworkers and several folks from other sections who interacted with hers. In lieu of physical invitations, relatives and other friends would later shower her with Facebook congrats and well wishes, which meant a lot less cleanup for us and more leftover cupcakes for my son.

Her supervisor said a few words, as did a few other folks. As someone with the inside scoop on the Woman of the Hour, I added a few paragraphs of my own to put the event in context. The following is an expanded version of what fell off the tongue and from the heart in the moment:

Mom’s work history began as a teenage waitress at the local Dog ‘n’ Suds. She claims she wasn’t among those who did the job on roller skates, though that’s not how I remember her telling the story when I was a kid. From there she went through a couple of department stores, both of which eventually went out of business, same as that particular Dog ‘n’ Suds location eventually would. During my infancy Mom worked while Grandma basically raised me. Food stamps were a necessary thing till a social worker connected her with Jefferson National Life Insurance Company (no relation to the company currently bearing that name, far as I know). It was her first desk job with name plates instead of name tags. That was the beginning of a 23-year career she loved. Between her pension-admin job and Grandma’s Social Security checks, we three in that humble townhouse were never rich or even middle-class, but we were stable.

Then in the early ’90s Jefferson National got bought out by a bigger, newer insurance company that eventually ran themselves aground thanks to various forms of publicly documented malfeasance. The Jefferson National logos were removed from the building, and the gutted company joined her first three jobs in the resumé graveyard. All employees were relocated up north and outside city limits. Riding the bus to and from work for 23 years gave way to long, congested drives far beyond the bus-line reach. It was one of the worst fates they could’ve assigned to a woman who hates driving on interstates.

Mandatory party punch filled with the tears of all the disappointing, dismantled companies she left in her wake.

The quality-of-life differences were vast and depressing and burdensome. She gave them her all for a few years till she couldn’t take it anymore. She abandoned ship before their controversial headline years began and found refuge in another financial organization whose primary line of business always sounded so boring when she tried to describe it that I still can’t remember what they did without cheating and Googling them. I visited her there a few times and remember feeling really sleepy every time I walked in.

They did right by her, but on some level I never understood, she felt they weren’t a solid fit or a lifelong option. So she surprised everyone who knew her by going back to college and earning her Finance degree at age 50. Her graduation was held at the Indiana Convention Center, same place where some of our geek conventions hold court. Meanwhile, the formerly large company that bought out her favorite employer, shrunken after years of their own shenanigans, got themselves swallowed by a bigger fish.

That piece of paper was exactly the springboard she needed to make the leap to her final workplace. After a few months of contentment among their ranks, she knew I was more than ready to escape the restaurant management field and recommended I find a slot there for myself. My first interview was for a position that was well beyond my skill set, and ended with three supervisors staring blankly at me like they were filming a dry run for The Office. A few months later I aimed for a lower position, came in hopped up on sugar and caffeine, and gave the performance of a lifetime to the woman who would become my next boss.

And there we stayed for fifteen years, kept in our separate corners both by company bylaws and by my insistence in their adherence to same. Some folks read over this and think it’s adorable that we worked at the same place; others read this and think, “Dude, there is no way I could handle working near my mom.” In this case, you’re all right. Some days were better than others, same as any other company.

And now at age 66, postponed as long as necessary for the sake of value-added baby-boomer Social Security perks, she’s reached the end of that career journey. Nearly five decades of twists and turns, of roadblocks and generously opened doors, that she had to go through to reach the finish line, through the phases from single-mothering to teenage waitressing to midlife-college-grad number-crunching — not just so she could do what she got to do, but so that someday I would get to do what I do, too. 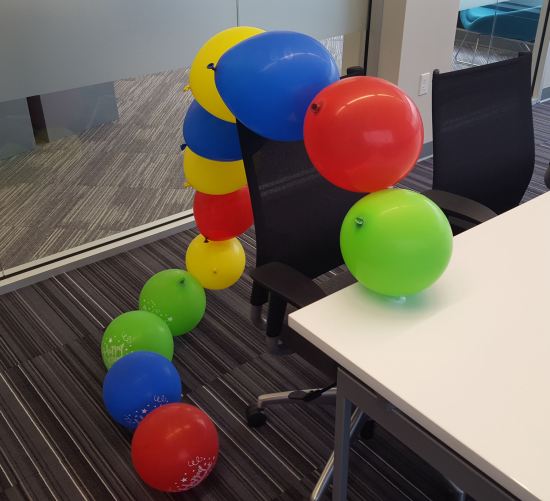 Party decorations included several cheap HAPPY RETIREMENT balloons taped to a whiteboard. I entertained myself during post-party cleanup by sticking the balloons together into an impromptu balloon centipede. And/or another metaphor.