Finally, two guests who showed US how jazz hands are done.

Defying all expectations, Supergirl has become must-see TV in our house. I’ve yet to write about it here, but Twitter followers are (hopefully) used to me live-tweeting it on Mondays for fun and more fun. (I think most of the I’ll-follow-you-if-you-follow-me-and-also-please-buy-all-my-ebooks crowd already Muted me seconds after I followed them back anyway, so I may not be bothering as many people as I think.) The show has its occasional silly moments and head-scratching choices (many of them Maxwell Lord’s fault), but Kara, Alex, James, Hank/J’onn, MVP Cat Grant, and, yes, even Winn are a welcome sight to us.

Last year Anne and I discussed the notion of no longer considering any conventions an automatic buy-in until and unless the guest list gave us a solid reason to commit. C2E2’s early guest announcements for 2016 were okay, one of them pretty great. (We’ll get to him in a later entry.) Then they added special guests Melissa Benoist, the greatest Supergirl of all time, and former Grey’s Anatomy costar Chyler Leigh, who plays her adopted sister Alex. They sealed the deal for us.

Behold above the newest addition to our ongoing jazz-hands photo-op collection. Even after posing for pics with the hundreds of fans in front of us, their unstoppable enthusiasm bowled us over and won the con and the photo.

If you asked me to summarize our Saturday experience at C2E2, the answer is Supergirl. The dual photo op came later in the afternoon, but when security opened the floodgates and let all several thousand fans inside the show floor promptly at 10 a.m., we made a beeline for Benoist’s autograph line. She was supposed to arrive and begin signing at 10:30, but circumstances (Chicago road construction, probably) delayed her arrival till closer to 11:30. We were in the front half of the line and took about an hour to wind through, say hi, and be all dazzled at how she looked exactly like she does on TV, except no cape or glasses. From there we skipped immediately to the next line for an additional 15-minute wait for Chyler Leigh’s autograph as well. Also awesome in every respect.

The photo-op came later in the afternoon. In between the two came the Q&A on the C2E2 Main Stage. Our special host for the hour: Clare Kramer, best known as the evil goddess Glory from Buffy season 5.

We met Clare Kramer at Wizard World Chicago 2011, but failed to get a photo of her at the time. That oversight is now technically rectified.

Fun trivia and moments from throughout the talk:

* Supergirl’s costume was designed by three-time Academy Award Winner Colleen Atwood (Chicago, Memoirs of a Geisha, Tim Burton’s Alice in Wonderland). It was the only super-design Benoist ever had to try on.

* Neither had read the comics prior to winning their parts. Benoist immersed herself in the comics afterward, starting with the New 52 and then working backward. 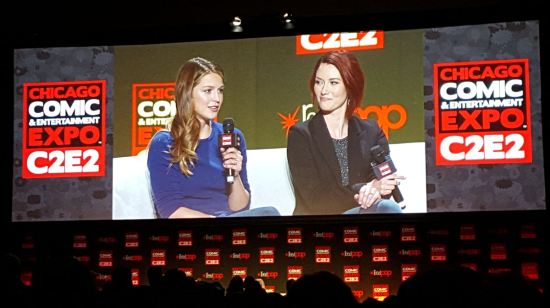 * Each episode takes eleven days to make, plus another three for visual effects and post-production.

* The hardest parts are when their characters have to be mean to each other, such as when Alex had to rescue Kara from her dream Krypton in “For the Girl Who Has Everything”, or in last Monday’s Red-K episode “Falling”. They get along great, which made Bad Kara scenes all the more challenging.

* The March 20th crossover guest-starring The Flash was, naturally, fun to film. Regarding Grant Gustin, Benoist confirms, “He was pretty jealous of my cape.”

* Benoist is a fan of Star Wars and Kingdom Hearts, and believes the Sorting Hat would put her in Ravenclaw. Leigh confirms Benoist is good at “math stuff.” 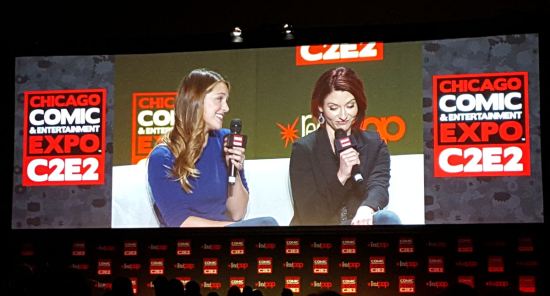 * When time began to run short for the Q&A, they asked all the young girls in line to step to the front to make sure they’d have the chance to ask their questions to their heroes.

* The final question of the hour came from a fan asking about their opinions of the sexualization of female super-heroes. The fan was a 12-year-old girl. Everyone was so impressed by the maturity level of the question that answering it kind of became beside the point.

…and that’s how 85% of our Saturday went. Friday was a fabulous day in itself, but Saturday was all we’d hoped and more. Much like the TV show itself.

More C2E2 pics to come. To be continued! Other entries in our special 9-part series: