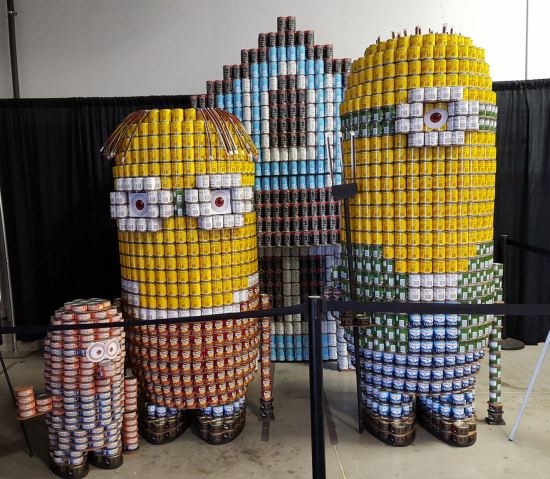 It’s that time again! The Indiana State Fair is an annual celebration of Hoosier pride, farming, food, and 4-H, with amusement park rides and big-ticket concerts by musicians that other people love. My wife and I attend each year as a date-day to seek new forms of creativity and imagination within a local context. We’re not as thrilled about carnival rides as we used to be, and the State Fair almost never invites musicians I like. In between snacking experiments, our day at the fair tends to be all about sightseeing…

Another fun annual event is the Canstruction contest, which isn’t necessarily intended for local 4-H youngsters. Canstruction is a charitable organization that holds nationwide events in which engineers and other clever planners compete against each other in building the best sculpture made entirely from canned goods, preferably in recognizable shapes and not lazy Impressionist piles with titles like “Cleanup on Aisle 6”. After the judging and the public displaying are over, all those meticulously planned figures are torn down and the components are donated to local hunger relief charities, who in turn forward them to needy families totally unaware their next few meals used to be Art.

Exhibit A, picture above: Minions recreating Grant Wood’s “American Gothic”. The makers called it “FARMinions” as if the farming were the most important part. Begging to differ, I must insist this piece’s true name is “Aminion Gothic” whether they accept it or not.

From the dual realms of books and cartoons, Wilbur the pig from E.B. White’s Charlotte’s Web watches helplessly as the titular spider, made of canned olives, spins a special message to some unbelieving townspeople. Incredibly, everyone thinks the pig who’s sitting there doing nothing is super awesome, while overlooking the startling fact that among them crawls a spider who knows the English alphabet. Of all the animals to crack our codes and potentially steal the secrets contained in our books and classified government documents, why’d it have to be one of the ickiest ones in existence? 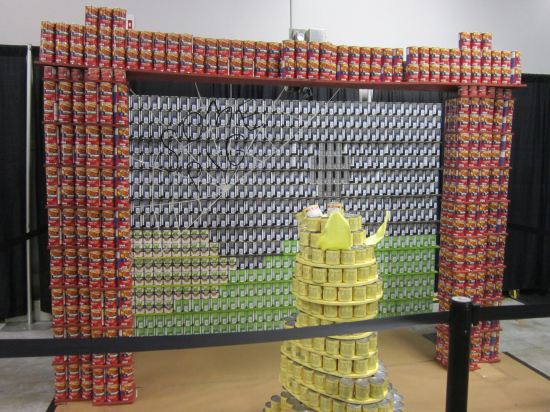 Also from my childhood: canned See-‘n’-Say! Old folks know the drill: the arrow points to a picture, you make it spin, and the machine makes the corresponding sound. Unfortunately, Anne got this version to work exactly once, and then it wouldn’t move again. Rather than slapping it really hard like a ’70s TV to see if that would make it go, we decided instead to walk away while whistling as innocently as possible.

From my childhood and from recent animation, it’s Mr. Potato Head! Sadly, Don Rickles couldn’t be on hand to provide his voice personally. Even at age 89, Nr. Rickles keeps pretty busy and lives comfortably enough that he doesn’t have to say “yes” to every gig. 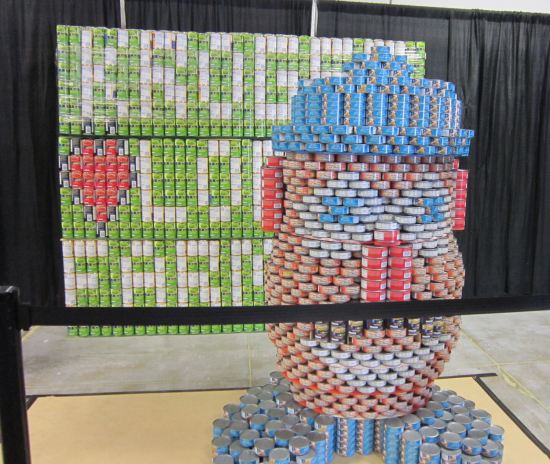 Also from the world of Pixar: WALL·E! Remember when he was popular? Good times. In this attempted comeback, WALL·E has returned to his post-apocalyptic work planet and is back to scooping up mounds of human garbage, now made from canned goods. Yum! 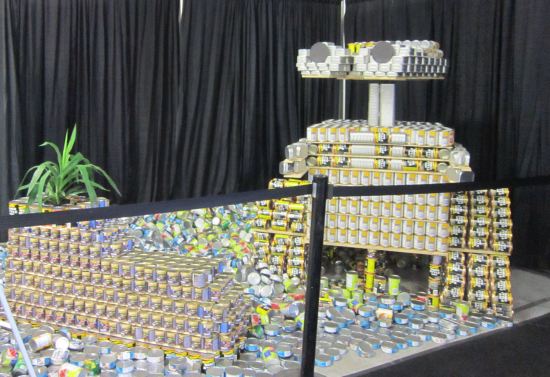 Also from the world of CG animation: Bob the Tomato and Larry the Cucumber from VeggieTales! Apropos of veggies, Bob is made from cans of diced tomatoes. However, Larry is made from canned green beans because no one would wish canned cucumber upon needy families. And a lot of picky children would prefer not to see them joined by Junior Asparagus.

In case you’re wondering, no, I have no idea who won. To me, it’s not about who wins or loses. It’s about the cans.

Part 1: Our Year in Food
Part 2: The Year in Lego
Part 4: The Art of the Fair
Part 5: Random Acts of State-Fairing