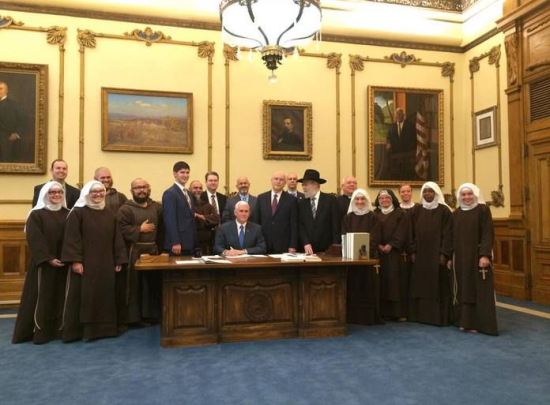 The actual Indiana Governor’s Office photo from today’s behind-closed-doors ceremony for Governor Mike Pence’s signing of the RFRA. No Photoshop or verified cosplayers were involved in the making of this picture.

[The scene: Kip and Kasi Kay travel from their hometown of Lewiston, Indiana, to do some shopping at a quaint stretch of stores up in the Big City. It’s the weekend after Governor Mike Pence signed Indiana’s Religious Freedom Restoration Act into law and dramatically improved the world and changed lives and ushered in a new era of human greatness and so on.]

KIP: Hello, beer man! We would like ten kegs of your finest brew.
KASI: We need it for tonight’s white-power rally.
LIQUOR STORE OWNER: What? Uh, no. You can go now.
KASI: But we have money and we brought our own truck.
LIQUOR STORE OWNER: Sorry, no. My church believes God created all humans as equals regardless of skin color. I can’t possibly.
KIP: We didn’t ask. Here, have money.
LIQUOR STORE OWNER: No can do. RFRA, folks.
KIP: What’s a roofra?
LIQUOR STORE OWNER: New law just took effect. Religious Freedom Restoration Act. Way I took it to mean, I don’t have to make any sale that offends me on religious grounds. Racists are one way.
KASI: You only sell to non-racists? Do you actually ask everyone? Is there a test they have to take before you’ll let customers go get drunk?
LIQUOR STORE OWNER: Who I sell to and when I sell it to ’em is my business. Good day, folks.
KIP: We’ll get you for this!
LIQUOR STORE OWNER: Wouldn’t advise it. I’m in the alcohol industry. I know some people you don’t wanna know.
[Kip and Kasi exit, confused and upset. Later that night, an angel leaves a quarter under Mike Pence’s pillow.]

KIP: Greetings, office-supply shopkeeper. We’re interested in personalized stationery for a friend.
KASI: It’s the Grand Dragon’s 75th birthday!
OFFICE SUPPLIER: I…wow. I see. I’m afraid I can’t help you.
KIP: What, because you have too many customers? No else is here.
KASI: We brought money. It’s green and everything!
OFFICE SUPPLIER: Sorry, no, but, well, what with the — how do I put this? — the bad history of your organization. The lynchings and whatnot. “Hate the sin, love the sinner” is one thing, but I can’t be on board with this.
KIP: Last I checked, America was a place where everyone bought and sold things!
OFFICE SUPPLIER: Maybe sometimes. RFRA says I’m within my rights to, uh, to not. I can’t believe we’re having this conversation, but here we are. It’s empowering, really.
KASI: You can’t believe? What happened to “The customer is always right”?
OFFICE SUPPLIER: You’re only a customer if I accept your money. I’m already imagining the penance this would take, and…sorry, no, I don’t need this on my conscience and I have enough sins on me as it is. Please, just…just go. Maybe there’s a greedier salesman up on the north side.
KIP: All the way up there? Are you kidding? On this week’s gas prices? Your religion sucks.

KIP: What’s up, tailor. My wife and I need some patches sewn on our robes.
KASI: Our parents gave these to us when we were kids, and we’d like to keep wearing them, but they do get raggedy.
TAILOR: I’m sure I can assist you with those. Let me see — ah. My, these certainly are vintage, aren’t they? And with such…stylized hoods.
KIP: Mine keeps drooping.
TAILOR: Yes, I hear that happens with old age.
KASI: Can you make them look better?
TAILOR: The best way I can think to do that is take them out back and burn them. That’s if you don’t have a problem with black ashes, of course.
KIP: Excuse me?
KASI: Not this RFRA nonsense again. Let me guess: it’s a religious problem?
TAILOR: What? No, this is a human decency problem. Do you two not get that?
KIP: Not religious, you say? I insist you take our very American money and fix our robes now.
TAILOR: Religion? As if. No, I’m an atheist and proud of it.
KASI: Ah-HA! We may be new to all this, but if I understand what I just learned ten minutes ago from doing three minutes’ worth of reading on my phone, if it’s not religious, then that means RFRA doesn’t apply and you have to fix them!
TAILOR: Wait. Hold on. I. [panicked look] Um, I misspoke. It’s religious.
KIP: Uh-huh. So you’re claiming atheism is a religion?
TAILOR: [grimaces] I…sure. Some internet people say that. I know Christians who keep telling me it is.
KASI: But do you think it is?
TAILOR: …
KASI: Do you really think atheism is a religion? Really really?
TAILOR: …no. NO, OKAY? Drives me NUTS when they say that. UGH. HAPPY?
KIP: Ha! I knew it. I knew it! No religion, no refusal! We’ll be back in two hours to pick those up. And there’s an extra $10 in it if you iron them.
[Kip and Kasi exit. Tailor mutters and carries robes over to the sewing machine. On a nearby rooftop, an ACLU lawyer in a Deadpool costume argues with the voices in his head over which side to take.] 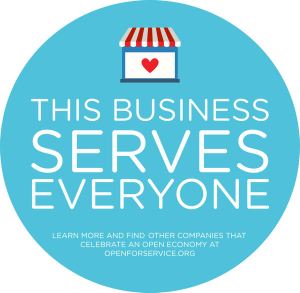 I’ve seen a store sporting one of these, and won’t be surprised to see more in the days ahead.

KIP: Hey! Comic shop guy! Can you recommend some super-hero books?
KASI: Honey, look. There’s something wrong with these new Captain America comics.
KIP: [gasps] What have you people DONE?
COMIC SHOP GUY: Look, I don’t draw ’em. I just sell ’em. Ya gonna buy something or not?
KIP: We demand you sell us real comics, with super-heroes who are just like us.
COMIC SHOP GUY: [side-eye]
KASI: Maybe other readers like “diversity” and affirmative action and abnormalities and all that, but that’s just not our thing. And stop side-eyeing my husband!
COMIC SHOP GUY: Nah, not gonna do that. Door’s that way.
KASI: Ohhh, no, you don’t. Don’t even start with your “RFRA” this and “religion” that and “freedom” blah-blah-blah! I saw the sticker.
COMIC SHOP GUY: What sticker.
KASI: Don’t “what sticker” me. I checked Facebook today. I know all about the “Open for Service” stickers that clearly state “THIS BUSINESS SERVES EVERYONE”. And you have three of them on your front windows.
COMIC SHOP GUY: So?
KASI: We’re everyone, too.
COMIC SHOP GUY: You sure about that?
KASI: Don’t make me define “everyone” for you. I have a phone and I can Google “Webster’s Dictionary” for you right now. If this business really serves everyone, then you’d better give us comics, and you sell them to us right now or else.
COMIC SHOP GUY: A sticker’s not a legally binding contract.
KASI: So you’re saying the sticker is a LIE. That’s false advertising, you double-standarding HYPOCRITE.
COMIC SHOP GUY: Look, lady: I got standards, all right, and you two bigots ain’t meetin’ em. If you really want whites-only comics, you can dig in the Dumpster out back where I threw out a few hundred Speedball comics the other day, and some of ’em might still be readable. Otherwise, you and I are through and I want you out of my store or I’m callin’ the cops.
KIP: Speedball? Oh, you will rue the day, man.

KIP: …and that’s why we came to you, sir.
KASI: Do you think you can help us? This is all just so unfair.
ACTIVIST JUDGE: Y’know, a normal judge could probably find easy ways to toss out RFRA on constitutional grounds across so many possible demographics…but I’m flattered you thought of me. Keep talking. I’m listening.

[…and then it all went pretty much the inevitable way that such things do — either because of, or regardless of, any protests, boycotts, or petitions. And the status quo lived grumpily ever after. The End.]