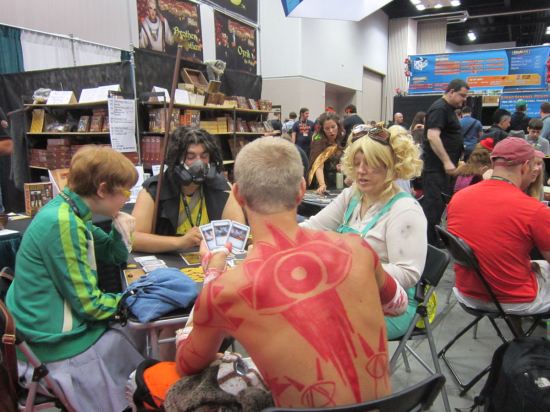 Gamers gaming with games. The costumes are incidental.

Previously on Midlife Crisis Crossover: my wife and I attended Gen Con 2014 and took pictures as usual.

Emmet Brickowski, made of balloon Legos. Or Lego balloons. Whichever. 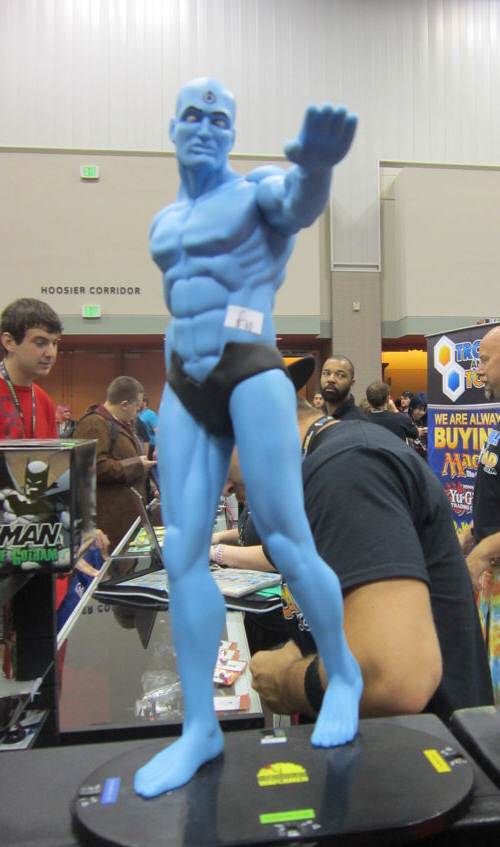 Heroclix Dr. Manhattan. I once tried a demo of the game. If I ever give it another go, I want him on my side. 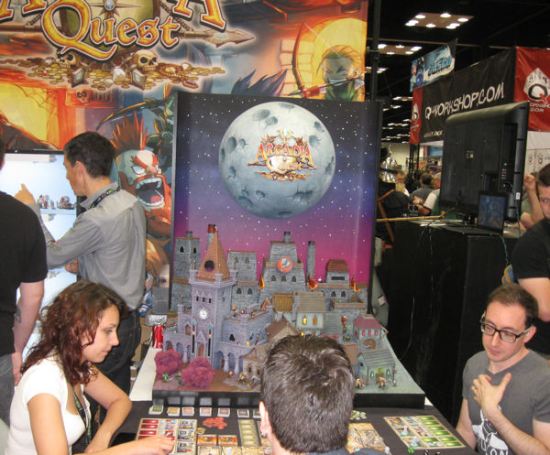 A demo of Arcadia Quest. I know nothing about the game, but I’m a sucker for exhibit hall dioramas.

Over three dozen food trucks serviced Gen Con between lunch and dinner. This one had the most confusing name. I can’t tell if it’s borne of relief (“Ahhh, yes, Burritos, what a pleasant sensation”), inspiration (“AHH! Burritos! That’s it! That’s the secret to everything!”), or blind panic (“AHHHHH! Burritos! RUN AWAAAAAY!”).

Gen Con didn’t bother with media guests this year. (Granted, Wil Wheaton attended, but as a gamer, no photos or autographs.) In their absence, the longest autograph line belonged to author Jim Butcher, creator of the Dresden Files series. I understand his line was quickly capped, so this is as close as we got to him. I’d brought a book of his just in case, but it didn’t happen.

My wife models a pair of foam weapons we were allowed to demo at each other. Very resilient and bouncy, and they come in child and adult sizes/weights. It was a too-rare opportunity for us to sword-fight each other. I’m pretty sure I won. 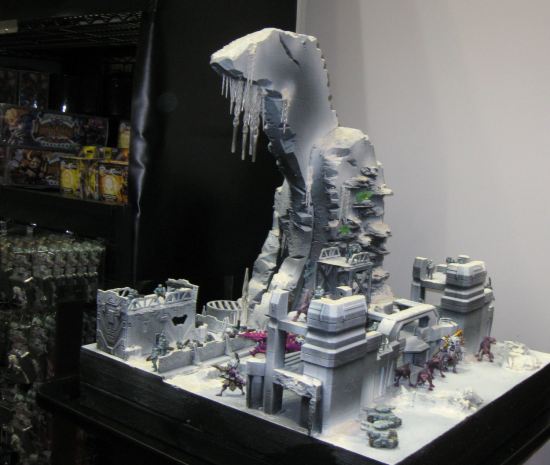 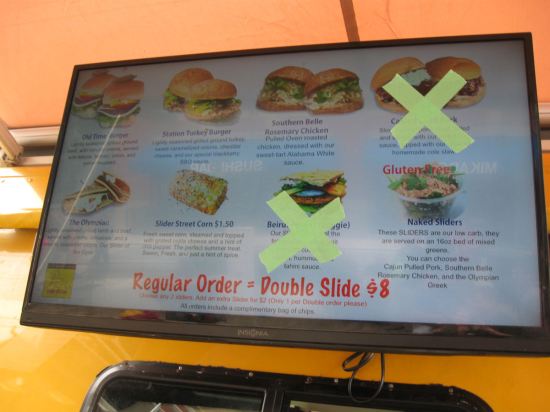 Some food trucks had a hard time keeping up with gamer demand. Menus with items crossed off weren’t uncommon. By 12:30 I saw one truck whose menu was already 80% wiped whiteboard.

I couldn’t find this duo in the event catalog, but I’m assuming they were fully sanctioned. In their defense, the Indiana Convention Center hallways aren’t the best acoustic backdrop, especially when crowds are everywhere and refuse to shush.

…and you should see Geek 1. 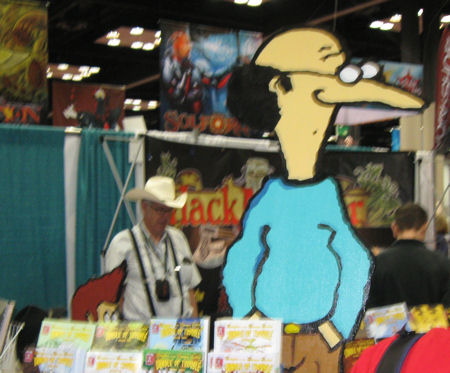 Kenzer & Co., purveyors, of Jolly Blackburn’s fun, reliable Knights of the Dinner Table, were among the very few graphic novel publishers in attendance. I want more of those, not less!

Stabby monster made of balloons. Or possibly Lego balloons.

Remember the Battletech Warhawk costume from Part One? Later, the guy removed it and let it stand alone for clearer pics. You can even see the tiny little driver in his tiny little cockpit. But in this mode, I’m counting this as a diorama and not as a costume.

I needed slightly more energy to finish out the day’s long walks, so slider lunch was topped off with dessert from another truck called the Flying Cupcake. This one’s filled with chocolate ganache. That did the trick.

Gen Con’s PR department confirmed this year’s attendance figures at a startling 56,000+. Judging by how crowded the exhibit hall walkways grew by afternoon (like, a near-impassable Indiana Comic Con level of crowding in a few spots), I can’t say I’m surprised, but we thought their 2013 figure of 49,000 would be tough to match. It’s great to know Gen Con is incredibly still growing and showing no signs of stagnation yet.

At the end of the day, we regretted having to take our leave, but all our being-fibers were exhausted and we had a dog waiting on us at home. The other attendees had another full day ahead of them before this 24/7 gala would end. By Saturday evening, though, you could already see signs that the city of Indianapolis was itching to return to its everyday, mundane state. Soon those tens of thousands of gamers, geeks, travel companions, and curious looky-loos would have to depart and turn the reins of the city back over to a kind of costumed crowd much different from our own.

Thanks for reading. See you next year!

Other chapters in this very special MCC series: