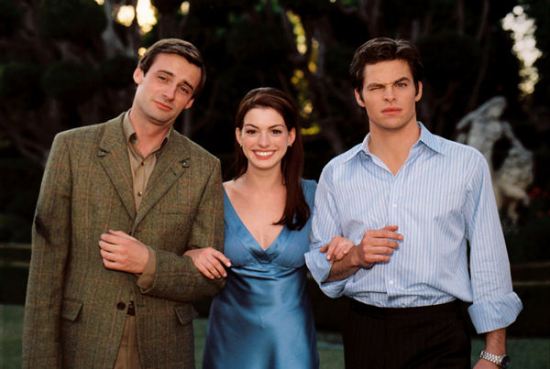 The Princess Diaries 2 turns 10 this August! But you already knew that, right? The stars, left to right: Callum Blue, a.k.a. Zod from Smallville; Academy Award Winner Anne Hathaway; and Starfleet Captain Chris Pine.

Now more than ever, you can count on your favorite sites to devote bandwidth every week to someone’s memories of events that occurred exactly on This Day in History multiples-of-five years ago. If it happened nine, thirteen, or twenty-two years ago, don’t waste our time. But fifteen years ago? Those precious moments need to be documented. Interviews need to be conducted. Reviews and opinions from that year need to be revisited and recontextualized. The important thing is that we need to be writing about stuff everyone loved way back when, instead of wasting a lot of time searching for new stuff in the world of today. Nostalgia rules! Discovery drools!

For once, I’m getting a few steps ahead of their game. Instead of waiting for them to tell me what to celebrate, like some kind of chump who doesn’t own a calendar or know how to Google, I’m planning my own social schedule in advance so I can be first in line to define “the Good Ol’ Days” for everyone else with a big, boiling bowl of Remember When bouillabaisse. And you can join me!

Assembled here for your edification and self-improvement is a timeline of stuff that happened in the month of August at a temporal distance of 5n years ago, where n equals any positive integer. Study it, memorize it, stock up on your party favors, accept or improve upon my celebration suggestions. Best-case scenario: when news sites publish their anniversary articles on these same subjects at 12:05 a.m. on the appropriate day, your version will be ready to scoop them at 12:01. Go get ’em, Bernstein!

Your recommended nostalgia-party-a-day calendar for August 2014:

August 1: 100th anniversary of Germany declaring war on Russia. Spend the day making WWI references, but for true anniversary spirit you may not mention anything involving WWII.

August 2: Wes Craven’s 75th birthday. Time for a scary movie marathon, except when the kids come home from school. For that time slot, queue up Music of the Heart, which will celebrate its 15th anniversary in October. If they refuse to go to bed at 6 p.m., maybe switch to Red-Eye, which is only PG-13 and costars the Scarecrow and the lady from The Notebook.

August 3: 185th anniversary of the first public performance of Rossini’s William Tell. Change your ringtone to the famous finale, “March of the Swiss Soldiers”, a.k.a. the theme from The Lone Ranger.

August 4: 30th anniversary of Purple Rain reaching #1. Prince’s reign atop the Billboard Albums chart would last fourteen weeks, until its dethroning in January 1985. Today, listen to just one album track that your local lite-pop station hasn’t already played to death. Or maybe “Let’s Go Crazy” regardless because that final solo will never, ever get old.

August 5: 150th anniversary of the Battle of Mobile Bay. This moment in the American Civil War was probably taught to us in school, along with twenty or forty other Civil War battles I no longer remember. Send brief messages to any Alabama residents on your Friends list just to say “Hey.”

August 6: 5th anniversary of the passing of John Hughes. A week-long movie marathon might be a bit much unless you have some some extra vacation time set aside. Introduce your kids to your favorite ’80s movie, because chances are he wrote it. Then chat with them a while about how things are going at school, and reassure them life gets better later on.

August 7: 40th anniversary of Philippe Petit’s World Trade Center high-wire walk. If you haven’t already seen the gripping, emotionally candid documentary Man on Wire, now’s the appropriate time. Before all the daredevil stunts in the world had to be approved and sponsored by Red Bull, there was this guy, 110 stories up without a net or a care in the world. Do not mark the occasion by trying this at home across your local skyscrapers.

August 8: 45th anniversary of the Beatles’ Abbey Road cover photo. Go strolling around town and snap a selfie every time you cross the street.

August 9: My son’s 20th birthday. Play through your favorite installment of Final Fantasy from beginning to end including all side quests, then scour the internet for episodes of Gurren Lagann or Kamen Rider. Subbed, never dubbed.

August 10: 65th anniversary of the naming of the U.S. Department of Defense. Formerly known as the National Military Establishment, a name change was authorized this day in 1949 under the auspices of President Harry S. Truman, possibly to avoid future acronym confusion with NME Magazine. In the DOD’s honor, post lots of pro-military memes on Facebook.

August 11: 10th anniversary of Princess Diaries 2. Contact every cast and crew member in its IMDb listing. See how many of them will grant you an interview, whether they’re famous or not. Transcribe their fading memories and bitter regrets into an article titled “An Oral History of The Princess Diaries 2” and see if Buzzfeed or Upworthy will toss you some nickels for it.

August 13: Alfred Hitchcock’s 115th birthday. Even though he’s dead, the birthday parties must go on! You can splurge on any of his Criterion Collection offerings (such as the recently released Foreign Correspondent) or pick up one of those discounted boxed sets that collect many of his public-domain oldies for one low price with even lower quality. Just remember: it’s his birthday. Is that really your idea of celebrating?

August 14: Josh Brolin and Diane Lane’s 10th wedding anniversary. Use the morning to make up your own spoilers about Lane’s return as Martha Kent in Batman vs. Superman: Dawn of Justice; after work, settle in for any of the 900 films Brolin has appeared in since 2010.

August 15: 45th anniversary of Woodstock, opening day. Pay local musicians to perform in an abandoned cornfield while you and your friends listen, mellow out, and defend the perimeter from the corporate sponsors who’ll swarm around you trying to turn it into a 21st-century sellout festival. Keep the musicians happy and well-fed so they won’t be tempted to give in.

August 16: James Cameron’s 60th birthday. Sign for a $200 million loan and buy yourself the Greatest Birthday Party of All Time. Ignore friends and family who mock you for it. Watch their jaws drop when you earn $600 million worth of presents.

August 17: 65th birthday of Downton Abbey creator Julian Fellowes. Dress formally, speak haughtily, and insist to your British friends that you know their history better than they do.

August 19: 95th anniversary of Afghanistan’s independence. Take some time to reflect on exactly how well that’s gone since then. Maybe in an essay on your blog, thousand-word minimum.

August 20: 2,000th anniversary of the execution of Agrippa Postumus, son of the Roman Emperor Augustus. Uhhhhh, maybe grab some pizza, wine, and tiramisu? Look, how many events from A.D. 14 were you planning to celebrate this year? How many times in 2014 will a newscaster be able to introduce a human-interest filler story with, “It was exactly two millennia ago today…”? Ain’t no party like a millennium party, so just shut up and roll with it and hope no one calls you out as a fake Postumus geek.

August 21: 55th anniversary of Hawaii’s statehood. Yep, it’s been fifty-five long, boring years since America added any new states. You could cozy up with any of the thousands of movies or TV shows set in Hawaii, or you could launch a Kickstarter campaign to buy statehood for your favorite U.S. territory. If it were me and I’d forgiven Kickstarter for the sins of its users, I’d choose Midway Island, which in 2014 celebrated its 155th year as an officially noticed territory.

August 22: 5th wedding anniversary of Milla Jovovich and director Paul W. S. Anderson. Mr. and Mrs. Resident Evil are still going strong! You, your friends, and some well-armed arch-rivals can get together for a dynamic night on the town, killing some zombies and preventing some apocalypses and ignoring some film critics.

August 23: 0th anniversary of Peter Capaldi’s first full Doctor Who episode. Because it won’t hurt you to live one day this month in the here-and-now. Your season-premiere viewing party is all set and invitations have been sent, right?

August 24: 25th anniversary of Pete Rose’s banishment from Major League Baseball. Buy a fist full of lottery tickets from your neighborhood gas station and head down to the nearest American Legion post for bingo night.

August 25: Elvis Costello’s 60th birthday. I own seventeen of his albums and will observe the holiday by listening through some of them while wracked with sobbing because I AM SO VERY OLD. Not as old as Costello, but OLD.

August 26: 50th anniversary of Mary Poppins. Sing all day long. Sing everything, absolutely no talking allowed. If you’re not good at rhyming, have some rhymes prepared in advance in a small notebook before you leave the house. If you see anyone speaking instead of singing, report them to the authorities.

August 27: 15th anniversary of Brendan Fraser as Dudley Do-Right. Using only the devices and materials you already own, see if you and your friends can make a better Dudley Do-Right adaptation. Bonus points if you can go from script to filming to VFX to final cut in six hours or less and still do better.

August 28: 5 years since Noel Gallagher’s departure ended Oasis. Start a rock band with your siblings. See how long you last before you begin picking fights with each other. The first one to cry when punched loses.

August 29: Director Joel Schumacher’s 75th birthday. Nippled Bat-suits for everyone! If you already own one, we’ll also accept a Lost Boys mullet.

August 30: 30th anniversary of the Space Shuttle Discovery‘s first launch. NASA mission STS-41-D was a proud moment for America’s third Space Shuttle. With 39 missions on its permanent record, Discovery is now retired and on display in Virginia as a reminder of that one time when humans used to go driving in space. In its honor…hey, by any chance do you have a few billion dollars NASA could borrow so they can make themselves useful? The donation wouldn’t be tax-deductible, but they might give you a free pilot’s pin, or maybe a year’s supply of astronaut freeze-dried ice cream.

August 31: Richard Basehart’s 100th birthday. Buy used copies of Voyage to the Bottom of the Sea from Amazon Marketplace while spending the day talking like Basehart’s #1 fan, Gypsy from Mystery Science Theater 3000.