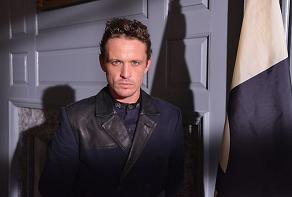 If only the blackout hadn’t canceled all Presidential debates, “Bass” Monroe could be rocking the podium.

Careful students of their cable TV channel guides, as well as viewers who paid attention to last week’s ending promo, already know that NBC’s Revolution is on vacation this week, preempted by the third 2012 Presidential debate, which is bound to generate higher ratings and almost as much Internet nitpicking. I have no idea why I should allow this skip-week to stop my weekly recap fun. With days to while away until next week brings us episode six (entitled “Sex and Drugs” according to NBC.com), the following is my idea for what this week’s episode might look like if it existed. Please enjoy fake episode 5½, entitled “The Body”.

Scene 1: Open on a knock-down drag-out melee between Our Heroes and a horde of sword-wielding hobos inside a spacious, empty indoor set. Miles takes them down three at a time. A heavily bandaged Nora is reduced to slaying only one at a time. Charlie is struggling with one grimy, 350-pound lout who refuses to let go of her crossbow and is shouting ugly sexist epithets. Aaron is hiding outside behind a bush, watching everyone’s backpacks. Charlie slips and falls backward. Her aggressor raises her crossbow above her head, poised to strike. Five-second “REVOLUTION” title card rolls.

Scene 2: “TWO HOURS EARLIER…” says the caption. In the hour that’s passed since last week’s train job failed, Our Heroes have only walked as far as Dayton, Ohio, some 110 miles east of Noblesville. Nora’s massive stab wound is clearly slowing down their progress. Miles decides they can’t go on like this and she needs a stab-wound specialist. He knows a former friend in Grand Rapids who might be able to help. Charlie is torn between continuing their trek to rescue her brother Danny in Philadelphia, or losing yet another female cast member. Grand Rapids it is, over 300 miles northwest of Dayton.

Scene 3: After a year apart, Neville is allowed to spend all of fifteen quality-time minutes with his wife Kim Raver, until President Monroe barges into their palatial estate and interrupts. He’s so excited at having extracted information from Rachel last week for the first time in her fifteen years of captivity, he’s decided he wants to press his luck and see what other info she’s willing to share. He orders Neville to report immediately to the town jail, where he’s to keep an eye on Danny 24/7. Neville is made of smiling, obedient, seething rage.

Scene 4: Our Heroes arrive forty minutes later in Grand Rapids, played here by some Canadian ghost town. Holed up in the attraction formerly known as the Meijer Gardens and Sculpture Park (played here by some random Canadian arboretum), we meet Miles’ acquaintance (David Leisure), once a know-it-all surgeon who could fix or cure almost any injury with just a few simple tools. Call him Dr. MacGyver. Naturally he’s also revealed to be a high-ranking officer in the Rebel Alliance. Unfortunately Nora’s wound is more serious than they wished, and four hundred miles of extra walking thus far haven’t accelerated her healing process. He needs a genuine surgical kit, but hasn’t possessed one in years because they were almost all destroyed in the wars following the blackout. Somehow. Fortunately, Nora knows where they can get a surgical kit. She knows a couple of guys in Augusta, Maine — almost 1000 miles east of Grand Rapids.

Scene 5: Neville arrives at the jail and compliments Danny on the new clothes that his henchmen forced him to put on. Danny spits out a few well-scripted words of defiance. Neville slams his head against a wall a few times, then hums a few bars from “Stand by Me”.

Scene 6: President Monroe enters Rachel’s room carrying a blowtorch, a pair of pliers, a chainsaw, and a copy of Fifty Shades of Grey. He wants more details about the mysterious Twelve Pendants that she and her late husband Ben designed. She won’t say a word. Monroe sets his arsenal on her nightstand, ties her to her chair, and prepares to craft his torture carefully.

Scene 7: Our Heroes arrive fifteen minutes later in Augusta and walk into a seaside warehouse located on an empty pier. Because, remember two episodes ago, boats are extinct. This little Maine neighborhood is now presided over by a pair of business partners named O’Bannon (Tommy Davidson) and Mourney (Peter Gallagher), who agree on nothing and are currently bickering over which one should be the senior partner in their governing of li’l Lobsterville. Miles introduces himself as “Gordie LaChance” and asks if they happen to have a spare surgical kit. They argue and bicker some more, then admit they do…but that they’ll never leave Lobsterville with it alive. Enter a whole bunch of wild-eyed ex-fishermen armed with hooks and boards-with-nails-in-them.

Scene 8: Neville takes out an old Monopoly board and challenges Danny to a game, since they’re stuck together anyway. They play for a while and chat about their favorite old board games. Neville delivers an extended soliloquy about the awesomeness of Risk without noticing any parallels between his memories and the show’s fantasy-geography conflicts. Danny smiles and gets a faraway look in his eyes as he remembers one time when he made his sister mad by landing on Free Parking and collecting several hundred dollars that had been piling up in the center of the board. Neville points out this is a variant rule, and that the official Monopoly rulebook clearly states nothing happens when a player lands on “Free Parking”. Neville hefts the Monopoly board by two corners, scatters pieces everywhere, and swats David over the head with it several hundred times, shouting “NO! VARIANT! RULES!”

Scene 9: We return to the opening scene. They fight and fight and fight. Charlie is saved at the last minute when her assailant is bludgeoned from behind with a garden shovel by Dr. MacGyver, who secretly followed Our Heroes from Grand Rapids after deciding that Charlie was cute enough to stalk. Between Miles and Nora, several dozen unconscious fishermen now lie in a cartoon dogpile. O’Bannon and Mourney each pull out a pair of rusty revolvers. Miles and Nora immediately surrender. The camera pans slightly to one side and reveals that Neville’s son Jason (formerly “Nate”) is standing next to the two captors, also armed and aiming at Our Heroes for some reason.

Scene 10: A leering President Monroe puts down his last weapon, steps away from a tied-up Rachel, and asks if she’s ready to talk yet. As with her previous fifteen years’ worth of interrogations, Rachel doesn’t have a scratch on her and doesn’t say a word. Monroe doesn’t understand what he’s doing wrong.

Scene 11: O’Bannon and Mourney take turns mocking Our Heroes at gunpoint, ranting about how much they love Lobsterville and won’t let these intruders ruin its ambience or disrupt the governing body they’ve jointly established. Then they segue into another squabble about who should really be in charge. Both inattentive attention-seekers drop their guns when the door behind them suddenly swings open and knocks them unconscious. Aaron enters with a sheepish look on his face. He didn’t mean to hurt anyone, but he was getting really lonely outside. Then creepy Dr. MacGyver reminds them he’s still there and just as mentally imbalanced as all the other Rebel Alliance leaders they’ve met so far. Clearly many of Monroe’s enemies have been confusing “rebellion” with “idiot cult” and signed up for the wrong movement. Mid-speech, Jason jumps at MacGyver and knocks his shovel out of his hands. Charlie grabs one of her quarrels by the shaft and jams it into her stalker’s face because of her ongoing transition to Hardcore.

Scene 12: A woozy Danny wakes up on the floor of his cell and finds Neville lying in his bunk and weeping. Danny’s heart melts and he asks Neville what’s wrong. Neville talks about how much he misses his parents, his childhood dog, his favorite Cajun restaurant, jazz albums, antiperspirant, and The Way Things Were. Danny rests a sympathetic hand on this pathetic man’s shoulder. Neville responds by grabbing a wheelbarrow from outside and running over Danny with it several times.

Scene 13: Nora locates the one true surgical kit and patches up her own stab wound. She’s fine now. Aaron complains that they haven’t eaten since episode 1 and wants to know if they can make meal arrangements. Charlie refuses to let them hunt cute forest animals, and says she’d love to have one as a pet. Fortunately, Miles knows an especially fertile orchard not far from Noblesville, a quick-‘n’-easy 1100-mile jaunt down the road. They should arrive well before lunchtime.

The End! And they all lived happily ever after, especially Jason after disappearing once again and returning to Philadelphia without anyone noticing how randomly he’s written.